Fort Worth going west with new growth from ranch land 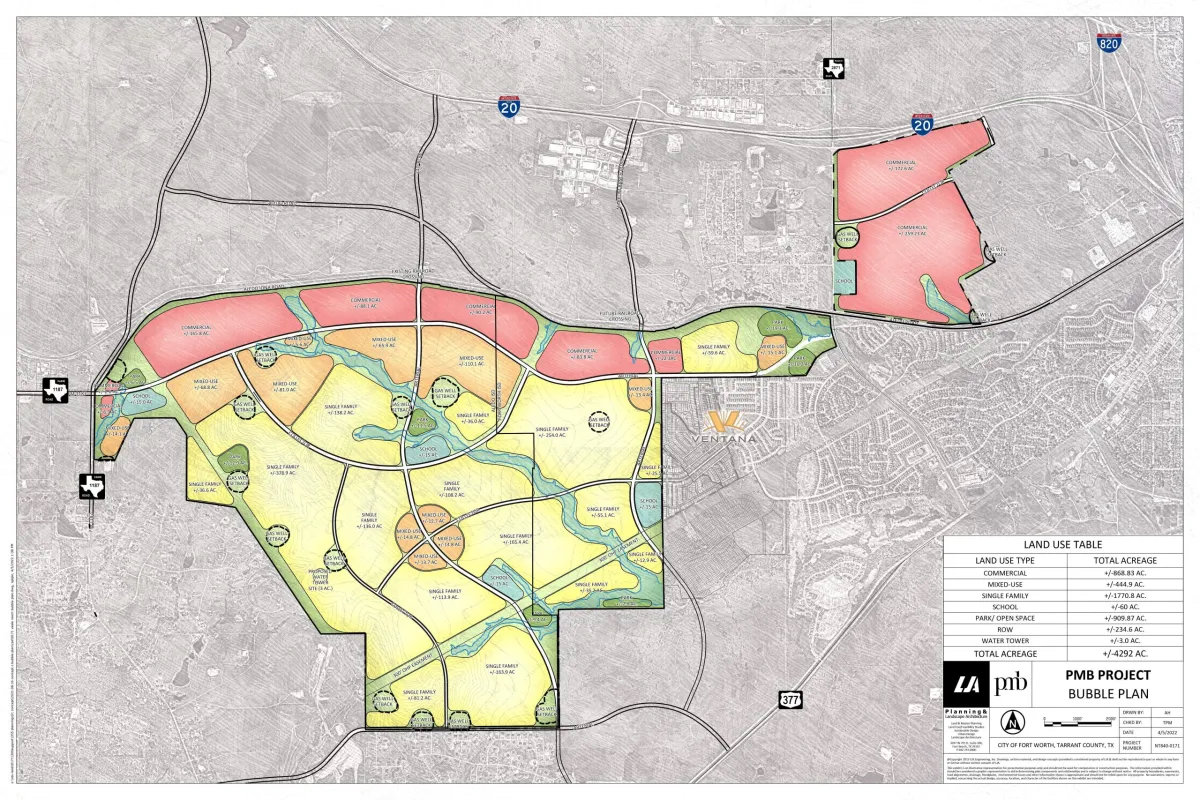 A new development in west Fort Worth could bring 5,000 new homes and take 15 years to complete.

The development, which will also include 1,000 acres of prime commercial property, is moving closer to getting off the ground.

The ranch property is located east of the company’s Ventana development, an 1,800-home community. The Veale Ranch property is in both Tarrant and Parker counties and is in both the Aledo and Fort Worth school districts. It is about 12 miles west of downtown Fort Worth.

“We're excited about it, and we’re still doing the upfront planning, which for a project of this scale is no small task,” said Taylor Baird, a partner at PMB.

“That’s if today’s prices hold,” Baird said. “We've had significant price appreciation and inflation recently. I would expect a pretty broad range of home prices and product types that appeal to a lot of demographics.”

PMB is working with the city on the water, sewer and other infrastructure plans for Veale Ranch, Baird said.

“This is going to be around for a long time, as we’re probably looking at a 15-year project, at least,” said Baird.

Plans for the project should reach the city in the next few months, Baird said.

The Veale Ranch has been in the Veale family since 1935. When put up for sale in  2017, the ranch was listed at $95 million, though the sale price to PMB was not released.

PMB’s Baird said close to 1,000 acres of the former ranch is expected to be available for commercial development in the Veale Ranch project, most of that just south of Interstate 20 and along a Union Pacific rail line. The Walsh Ranch project, under development, also has about 2,800 acres designated for office and industrial development just north of the rail line.

“It’s a great area for a big project,” Baird said. “We've owned the Veale Ranch for almost a year and we just want to get the upfront planning done, which sets us up for the most success for the overall project.”

The city could see big benefits from a large commercial project in that area, Michael Crain, District 3 councilman for the area, said.

“This will help us attract a large project to the city, to have this much land available for commercial development,” he said.

Fort Worth already has garnered some interest from large commercial projects. When Fort Worth officials announced that the city was on the short list in 2021 for the Rivian Automotive manufacturing plant with a site under consideration on the westside in Walsh Ranch area, just north of Veale Ranch, many were taken aback by the location.

“It surprised some people,” said Crain. “But that area is ready to grow.”

Had electric vehicle startup Rivian Automotive chosen the west Fort Worth site, the area would have exploded with growth. Rivian eventually decided on a site in Georgia, but Crain said the process of working with Rivian was a good experience that will better prepare economic development officials the next time a project of that size and scope comes along.

“One of the city’s issues is not having enough commercial tax base, so anything we can do to change that is a great opportunity for us,” he said.

The Veale Ranch project’s length isn’t bothersome, Baird said. “We’re not going to make hasty decisions early on that jeopardize the quality of the project over the long term.”

The once-rural area west of Fort Worth first began to change when the Walsh family – who had owned 7,000 acres of ranch land just north of Veale Ranch since the 1930s – opened the land up for development.

“By the end of this year, from a development standpoint, they will have delivered about half of that entire residential community already, which is huge,” said Greg Miller, a spokesman for the Walsh family. “It's only been on the ground for a little more than five years now, so the traction's been really, really good.”

That part of the development – primarily north of Interstate 30 – is continuing apace, Miller said. What the Walsh family, through the Walsh Companies, has focused on in the past 18 months is its partnerships with the various Fort Worth economic development groups for the 2,800 acres south of I-20, the area that Rivian had under consideration, he said.

“That is one of the largest plots of development-ready land for a future huge economic deal for Fort Worth,”  Miller said.

Miller said they are not planning to take the first offer that comes up for that area.

“It's what's going to be right for Fort Worth and really kind of open up that west part of Fort Worth as an additional economic corridor in the same ways that Alliance has up north,” he said.

Crain said the city and state are working to prepare for the transportation needs of the area as it grows.

“I think one of the things we learned from working on the Rivian project is that we need to be proactive in terms of transportation,” he said. “That’s something that can’t wait.”

PMG’s Braid sees the west Fort Worth developments as some of the best assets in the north Texas area.

“You're 12 to 15 minutes from downtown Fort Worth from the Veale Ranch and from Walsh Ranch,” he said. “That’s unique. There aren't a lot of other large acreage opportunities like this near major metros that people want to live in, even around the state of Texas.”

This article first appeared on Fort Worth Report and is republished here under a Creative Commons license.

How to help trees survive the heat and below-average rainfall