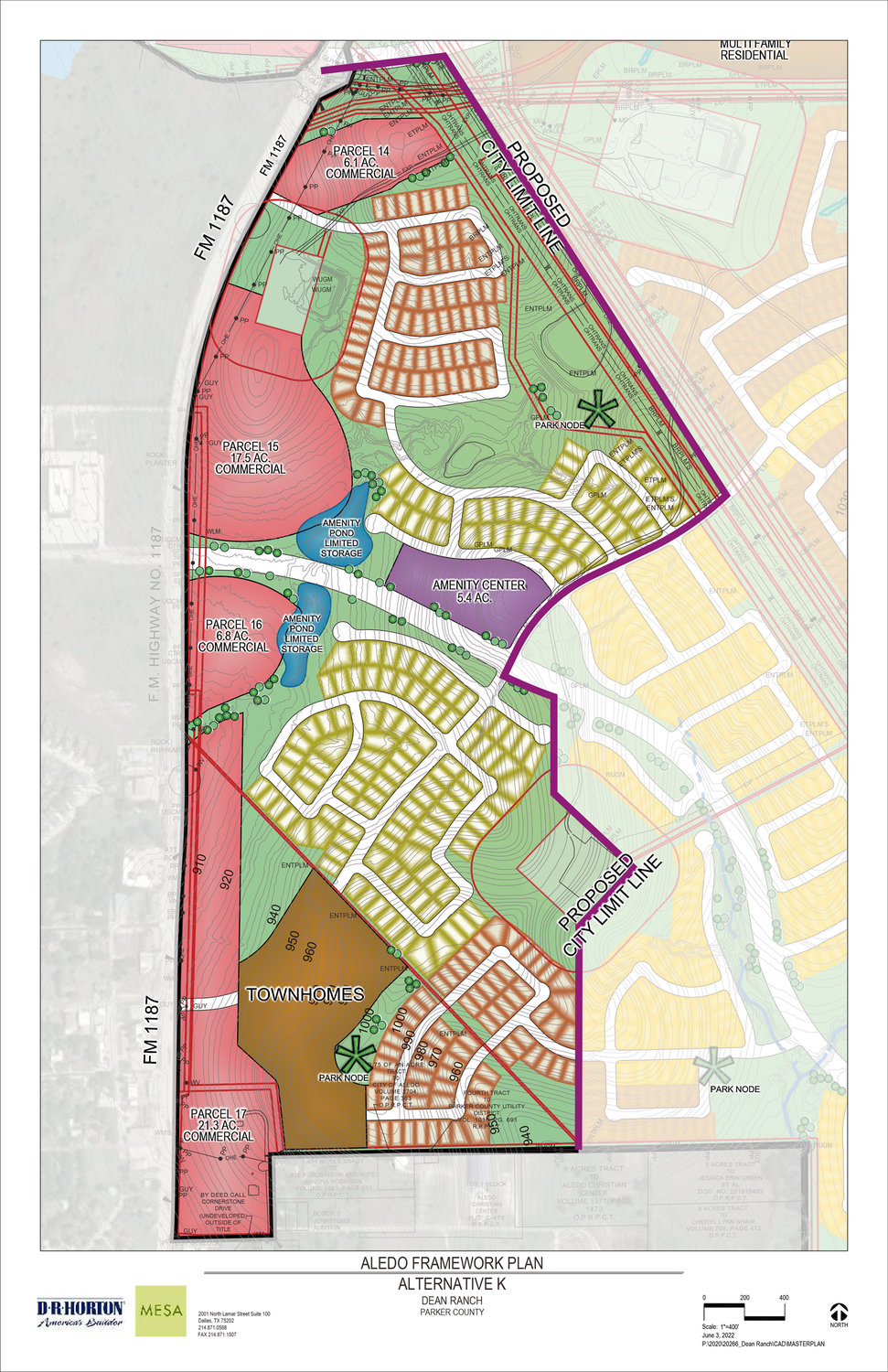 The Aledo portion of the overall 1,825-acre Dean Ranch development will be 238 acres at the northern entrance to the city. The thoroughfare running through the proposed development would be an extension of Bailey Ranch Road.
Special to The Community News
Posted Friday, June 24, 2022 1:43 pm
By Rick Mauch
The Community News

As a result of a historic decision by the Aledo City Council at its meeting on Thursday, June 23, the eastern entry to the city will soon have a new look.

The council voted to approve a development agreement that will allow for the voluntary annexation of 238 acres of Dean Ranch into the city, opening the door for development according to Aledo community standards. It will also add greatly to the community's tax base in the next five years.

The annexation is expected to take place in the fall.

Working through master project developer Levens Capital Partners, LLC, several homebuilders, including the notable D.R. Horton, plan to build about 325 single-family homes and up to 100 townhomes in the Aledo portion of the project. This area will also feature a variety of community amenities, and at least 35 acres are planned for new commercial development.

City officials also note that while many new homes that have been built recently in Aledo have been on 50- or 60-foot lots, the new single-family homes in the Aledo portion of Dean Ranch will be on 60- or 70-foot lots.

Dean Ranch is a 1,825-acre, mixed-use, master-planned development that will be located along the Fort Worth/Aledo border. The 238 acres that will now belong to Aledo are located along Bailey Ranch Road and FM 1187.

Newly elected Aledo Mayor Nick Stanley called the first major act of his administration a “major win” for Aledo. With the project going to be built on Aledo's doorstep one way or another, this decision allows for Aledo to be in control of how the growth on these 238 acres takes place.

"Not only will we add high-quality, single-family homes on substantial lots and well-designed townhomes, but there will also be a private amenity center, public parks, trails, green space, and substantial new commercial development, all of which adds to our tax base," Stanley said. "Most importantly, we get to decide what this gateway to our community will look like, by having a portion of the development actually within Aledo and distinctively shaped by the design standards in this carefully negotiated agreement."

Infrastructure improvements on streets, sidewalks, drainage, and utilities, projected to cost up to $41 million will be financed by the creation of the first public improvement district (PID) in the city's history and will not be a burden to taxpayers, city officials said. PIDs are a financing tool through which such improvements are paid for by the developer and are commonly used by Texas cities to provide specific types of improvements or maintenance within a designated area.

A private amenity center that will serve the subdivision — at least 5 acres in size — is planned to be constructed before or immediately following construction of the first 100 residential units. The clubhouse and swimming pool, as well as some pocket parks will be owned and maintained by the homeowners association.

In addition to the private amenities, at least 10% of the total development area is dedicated to public parks and open space for picnic pavilions, pedestrian connections to community park amenities, benches, trash receptacles, pet waste stations, playgrounds, and more.

City officials also hope that in the future the Dean Ranch internal trail system will be connected to Aledo’s larger trail system, creating more pedestrian and bike connectivity within the community, though no such plans have been formalized.

Stanley assured residents with any concerns that the council and staff are taking purposeful steps to address Aledo's dynamic growth in and around the community. Of course, among the major concerns is increased traffic congestion along FM 1187 and Bailey Ranch Road.

City officials note the entire Dean Ranch area was subject to a traffic impact study by engineering firm Burns & McDonnell earlier this year. Its conclusions and recommendations have been reviewed by the City of Aledo, as well as the City of Fort Worth, and along with TxDOT both communities are incorporating that study into their future infrastructure plans.

They also reiterated that the large development was coming anyway. Now, with the annexation, the city can enforce roadway design standards consistent with the traffic impact analysis, along with deriving significant tax revenues from the project.

Stanley added that if Dean Ranch was going to happen in Fort Worth, immediately adjacent to Aledo, it was critical that this part of the development be brought into Aledo and thoughtfully designed as an eastern “gateway” to the city.

The decision comes after more than a year of planning and negotiating between city officials and the developer. It also fulfills one of the final wishes of former Aledo Mayor Kit Marshall and former Fort Worth Mayor Betsy Price, who made an agreement that this would be best for both cities.

In June of 2021, the Aledo City Council approved a Joint Resolution and Boundary Agreement between Fort Worth and Aledo, through which a portion of the subject property in Fort Worth’s ETJ (extraterritorial jurisdiction) was released to Aledo’s ETJ, creating this opportunity.

How to help trees survive the heat and below-average rainfall