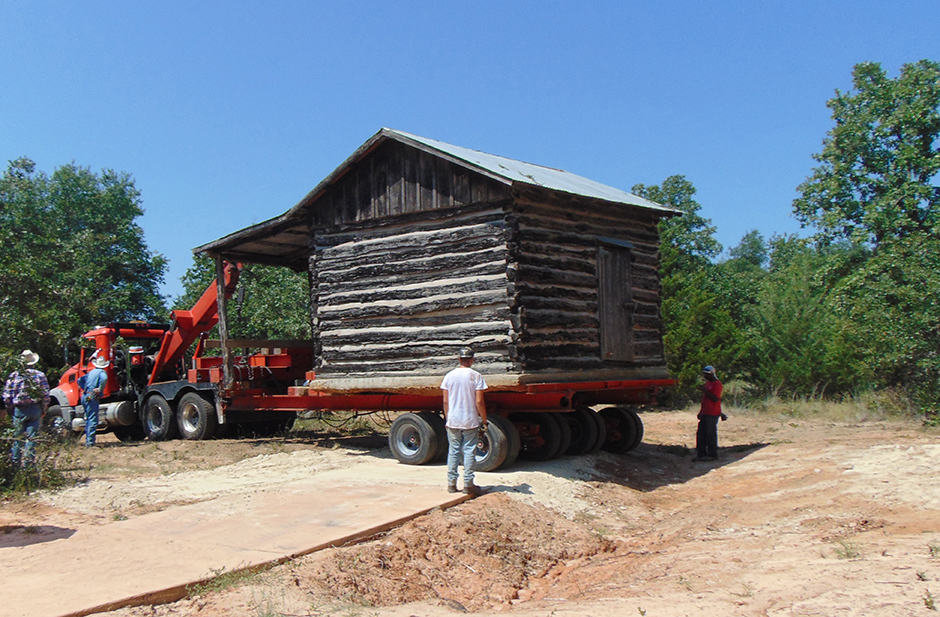 The McDonald Cabin has arrived at the Doss Heritage and Culture Center in Weatherford, and members of the 1849 Club (see below) are going to get the first sneak peek at the new arrival from 3-6 p.m. Wednesday, Oct. 11.

The cabin took three days to make the short trip from Brock to Weatherford. It is known as the McDonald Cabin and was donated to the Doss by Perry and Barbara Mader.

The log cabin was originally located on Grind Stone Creek that was on the back of the McDonald’s property in Millsap, and there was evidence it had been lived in at one time. It was moved toward the house and then used as a barn and a corn crib to store feed for their animals. The McDonald girls, Nora Loughrey, Jenella Young, and Barbara Mader spent their childhood playing in and around the cabin.

Planning for the Pioneer Cabin Park began more than a decade ago for an outdoor log cabin exhibit at the museum where visitors could see what the lives of early Texans looked like.

The outdoor exhibit will be located behind the museum, located at 1400 Texas Drive in Weatherford.

When the Pioneer Cabin Park is opened, this cabin will be used as the hands-on learning cabin.

“Several activities in and around the cabin are planned to help visitors, especially younger visitors, learn the different tasks of daily pioneer life,” said Curator Amanda Edwards. “Log seating will be located at the site for programs detailing the lives of early Texans.”

“The donations will be used to rebuild and restore the log cabins. While getting the first one on site is a big step, we are still raising funds to move the other four and then restore all of them so they can be enjoyed for generations to come,” said Dean Hungate, Managing Director of the Doss.

Visitors are encouraged to wear boots as the area is still an active construction site.

For more information on joining the 1849 Club or donating to the Pioneer Cabin Park, call the Doss at 817-599-6168, go by the museum at 1400 Texas Drive in Weatherford, or visit dosscenter.org.