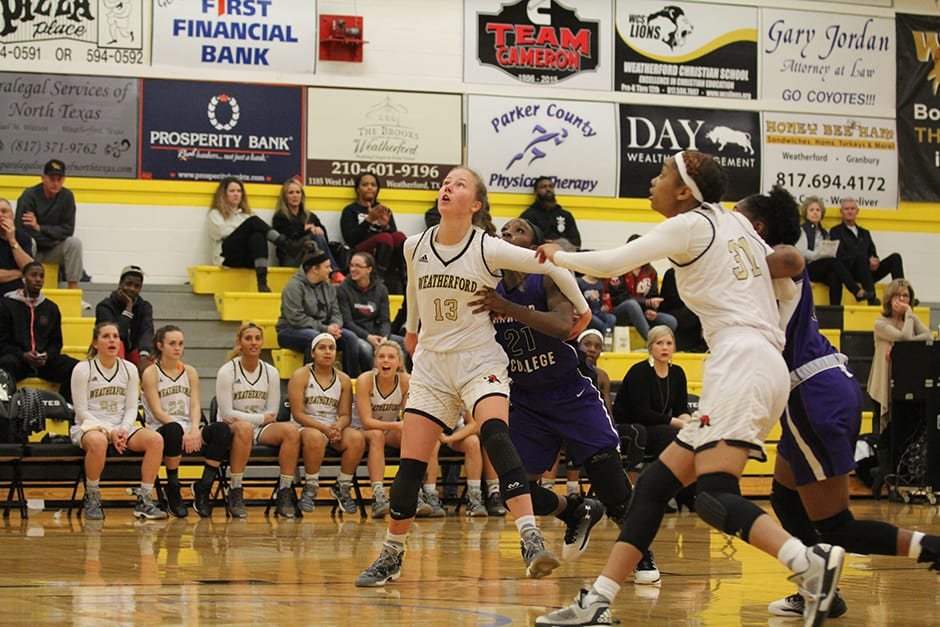 With five players who saw starting time, Weatherford College Lady Coyotes Coach Bob McKinley is confident the climb back to the top of the conference basketball standings is well within his team’s grasp this season.

“I think we’re good enough to get back there. We’re going to be good,” he said. “It should make all the difference in the world having five players back who started at one time or another.

“And when you figure we came so close to the playoffs last season, that experience should make a world of difference, and our confidence level should be way up.”

The Lady Coyotes were 13-12 overall a year ago and 6-8 in Region V-North. Five of their 14 conference games were decided by nine points or less, and they were 2-3 in those games.

“We beat Ranger twice. We were the only team to do that,” McKinley said. “That shows the talent we had. We were as good as any of the teams that went to the tournament.

“We lost twice to Hill and we shouldn’t have. We were in the mix the whole season.”

Leading the list of returners for the Lady Coyotes is 6-foot-1-inch sophomore post Masha Vasilevko (Grodno, Belarus), who’s 13.2 points-per-game scoring average was third in the conference last season, while her 85.7 percent free throw percentage was first. She was also named first-team All-Conference.

The Lady Coyotes should once again be a strong rebounding team, thanks largely to the likes of Vasilevko (6.5), McDaniel (5.8) and Strimaityte (5.6). They should also be good at the foul line once again as well with Strimaityte (79.2 percent, third in conference) and McDaniel (78.4, fourth) back.

“I think it already shows they’re hungry,” McKinley said. “The overall commitment in practice shows. They can’t wait to play that first game.”

They are joined by 6-1 sophomore forward/post newcomer Eva Lewis, a transfer from Connors State in Oklahoma. She will be eligible to play in January, McKinley said.

As usual, the Lady Coyotes are playing a challenging pre-conference schedule that includes a pair of home-and-home series against perennial powers Trinity Valley and Midland. They also have a home-and-home with always tough Howard.

“No matter what we do before conference, we’ll be ready when conference gets here,” McKinley said. “From where we are, I think we can win the conference. If we don’t believe it, who will?”