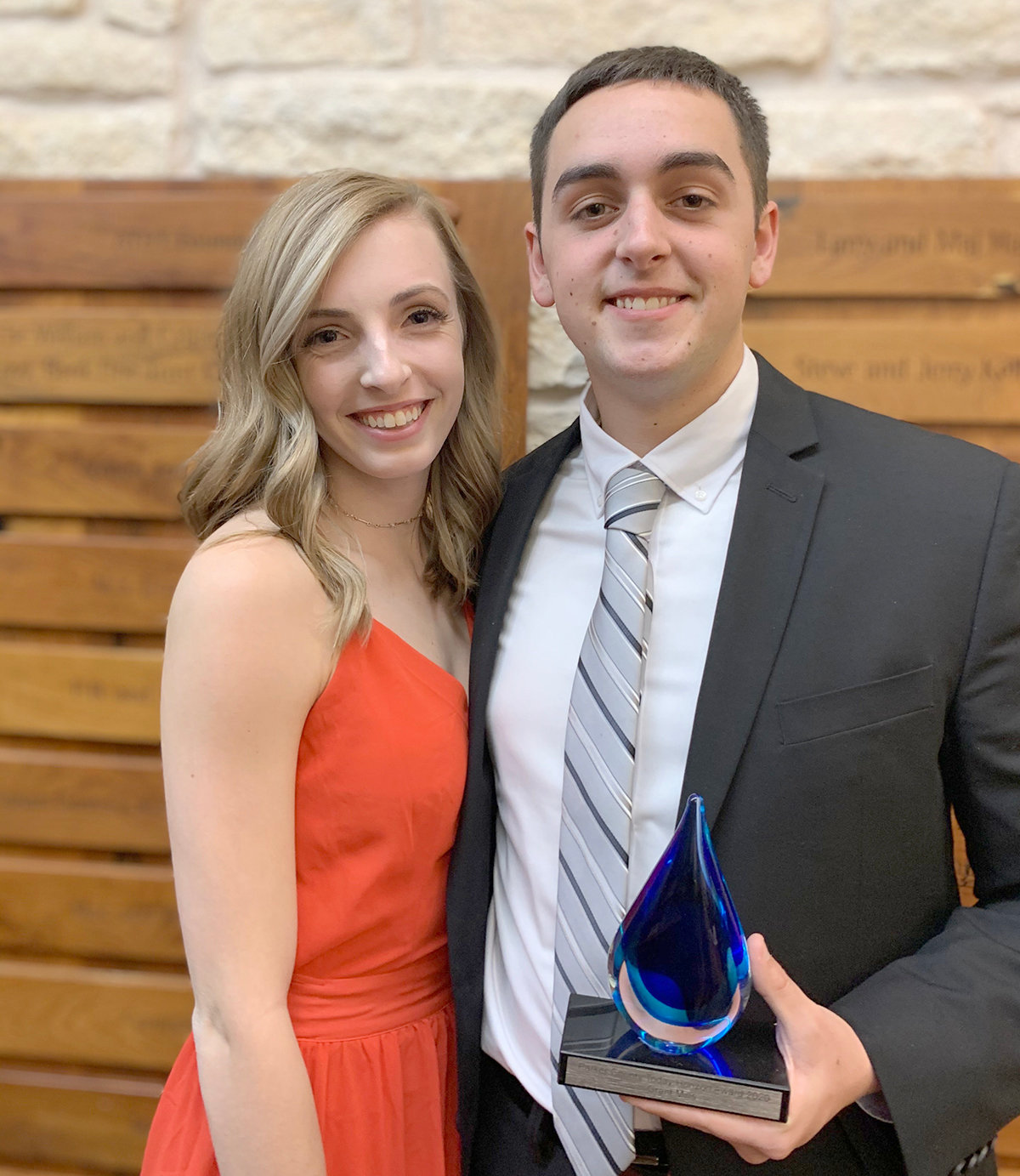 Grant Mills and girlfriend Jacey Lewandowski are shown at the Horizon Awards in February when Mills was recognized as one of Parker County’s 20 under 20.
Posted Monday, June 15, 2020 3:13 pm

by Rick Mauch
Special to The Community News

Grant Mills, outgoing student government president at Weatherford College and a member of the WC Class of 2020, is headed to the University of Texas at Arlington in the fall, where he plans to major in marketing administration with an emphasis on sports.

But then, he’s been putting his emphasis on sports for a while now as the mascot for the WC Coyotes.

Mills tried out for and earned the position in the fall of 2019. Like most of his life, it was an interesting story.

“I liked a girl by the name of Jacey Lewandowski and she was a cheerleader,” Mills said. “I realized I had no other class or organization with her, so I called the cheer coach and asked if they had a spot. So ‘mascotting’ it was, and we have actually been dating for over a year now.

“So something worked. It must have been the dance moves,” he added with a chuckle.

And yes, he does plan on trying out to be the mascot for the UTA Mavericks, he said. He also has higher aspirations with his degree, though he won’t name names.

“I chose Arlington in hope that I can work for one of the great Texas sports teams (presumably the Dallas Cowboys or Texas Rangers). ‘Mascotting’ will just be for fun,” he said.

Mills said the best part of being a mascot is “being able to escape and become someone you’re not on the outside.”

Mills moved to Texas from Mississippi in 2015 and attended Millsap High School. There, he participated on the varsity basketball, tennis, and golf teams. In basketball he was academic all-state in 2018, the same year he was nominated for homecoming king and class favorite.

And Mills does his part to help.

“I started a wheelchair cleaning service in 2017 when my parents and I realized that they weren’t getting cleaned on a regular basis,” he said, adding that patients eat and even sometimes sleep in them.

“Surprisingly, more patients than I can count highly appreciated the service, and being able to be a light in their troubled times is a great feeling.”

Mills and the rest of the WC Class of 2020 will celebrate commencement exercises on Saturday, June 20, at Kangaroo Stadium.

AGC presents final draft proposal to Board of Trustees

AGC meets for final time before Board presentation