No. 7 Ladycats hold off Chisholm Trail to win 6-5A opener; Bearcats down Grapevine in OT 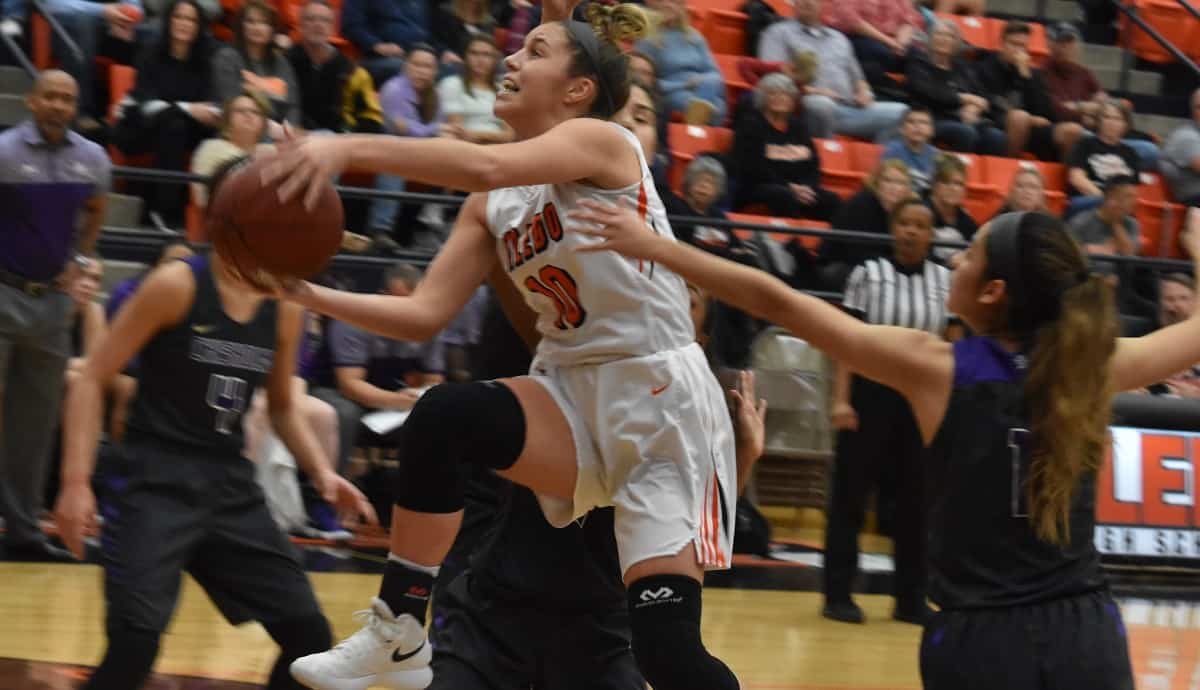 Aledo guard Taylor Morgan flies to the hoop on her way to scoring two of her game-high 20 points during the Ladycats' 49-43 win over Chisholm Trail. Photos by Tony Eierdam
Posted Tuesday, December 12, 2017 10:16 pm

A three-point bucket by Aledo guard Riley Sale began a 7-3 run late in the fourth quarter that lifted the state-ranked No. 7 Ladycats to a 49-43 victory over Chisholm Trail Tuesday night in the girls' District 6-5A basketball opener at the Aledo High School gym.

Taylor Morgan led the Ladycats with 20 points, while Sarah Haeussler added 10. Also scoring were Janessa Payne with nine points, Elizabeth Allanach with six, Sale with three and Alaina Touchet with one.

Aledo led 19-8 after the opening quarter and 31-19 at the half. Chisholm Trail outscored Aledo 8-5 in the third period to cut the Ladycats' lead to 36-27 as the game moved to the fourth quarter.

Aledo guard Noah Arrington steals a pass during the Bearcats' 63-59 overtime win over Grapevine Tuesday at the AHS gym. Arrington led the Bearcats with 21 points.

Aledo guard Cameron Yates scored eight of the Bearcats' 11 overtime points to lead AHS to a 63-59 victory Tuesday night in a boys' non-district basketball contest at the AHS gym.

Grapevine led 18-8 after the first quarter and 31-24 at the half. Aledo outscored Grapevine 17-9 in the third period to take a 41-40 lead into the fourth quarter. Grapevine scored 12 points in the fourth quarter while holding the Bearcats to 11 to tie the contest at 52-52 and force overtime.

Noah Arrington scored 21 points to lead the 'Cats. Also scoring were Yates with 15 points, Ayden Smith with 11, Truen Johnson with six, Leo Bell with five, Hunter Vela with four and Austin Hawkins with one.

For the complete story on both games see the Dec. 15 issue of The Community News.