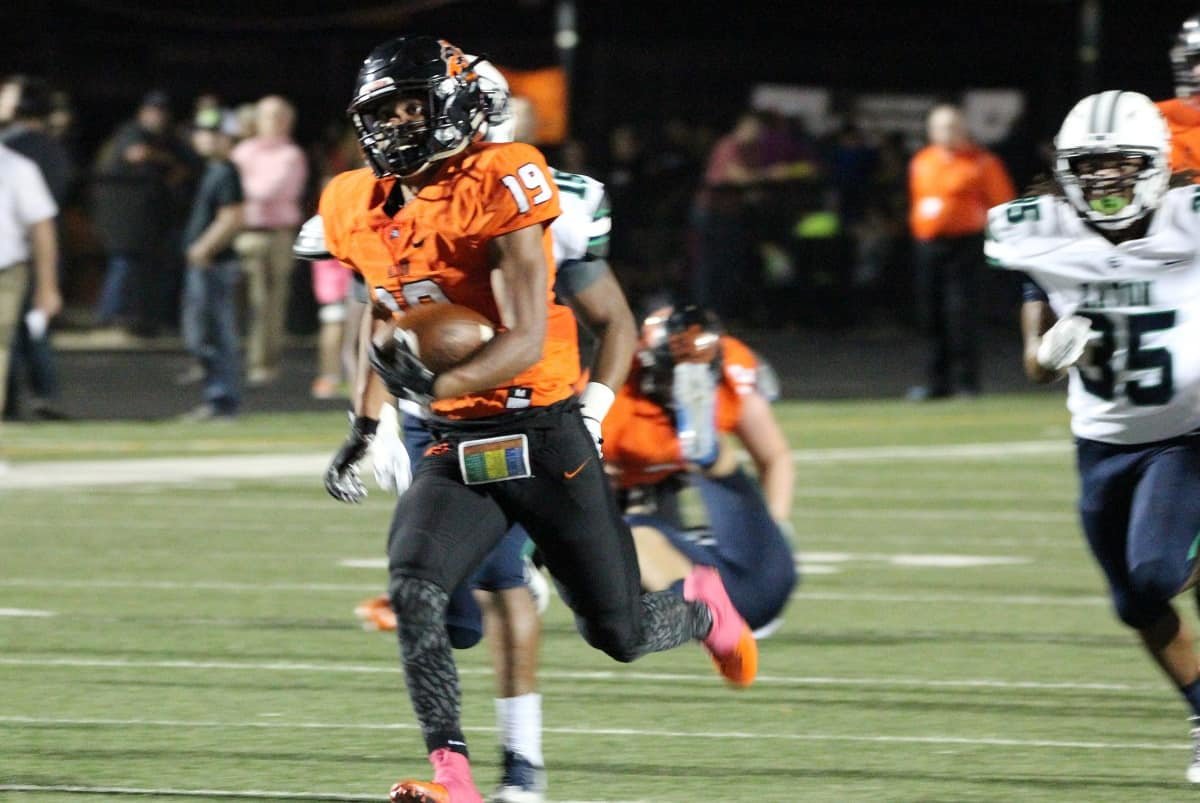 Paced by 257 yards rushing by junior tailback Tre Owens, the state-ranked No. 1 Aledo Bearcats defeated the Eaton Eagles, 52-13, Friday night at Bearcat Stadium to raise their District 6-5A record to 4-0 while also setting a state record for consecutive district wins.

Bearcats head coach Steve Wood has been a part of all 72 wins either as Aledo’s defensive coordinator or head coach. He said that although the focus of the players and coaches this week has been solely on Eaton, he is still proud to be with the team that broke the record.

“It feels great to be an Aledo Bearcat,” Wood said. “It’s a great program that Coach Buc (Tim Buchanan) built, and we are just trying to uphold our end. A lot of great players have contributed to this streak, and it has not been an easy thing to do.

“There are a lot of factors that went into the streak including our coaches and a community that gives us great support. This is an unbelievable place to be right now.”

As they have for all seven games this season, the Bearcats reached the end zone first.

However, it was a defensive touchdown as defensive back Gio Torres picked up a fumble by Eaton quarterback Riley Taylor and raced 40 yards to the end zone early in the first quarter. Cole Daniels booted the extra point for a quick 7-0 lead.

Eaton, aided by a pair of Aledo personal foul penalties, moved the ball on its opening possession. But the 11-play drive stalled, and Eaton missed a 46-yard field goal attempt.

The Bearcats followed with their first possession, a six-play, 73-yard drive that ended on a 11-yard run off right tackle by Owens. Owens was the workhorse in the drive, carrying four times for 61 yards including gains of 29 and 19 yards. Daniels’ kick increased the Bearcats’ lead to 14-0.

Eaton had the ball five more times in the first half, punting three times, losing possession on downs on another and being prey to an interception by Jeffrey “Scooby” Carter.

The Bearcats found the end zone three more times before the break.

Aledo gained a three-touchdown advantage on perhaps the most spectacular play of the half. On second down  and six from the Eaton 46, Owens took a handoff from quarterback Jake Bishop and found a pile of Eaton defenders off right tackle. But when it appeared Owens was stopped, he made a brilliant spin move that set him free in the secondary where he outran three Eaton defenders to the end zone with 1:43 left in the first quarter.

Bishop took control the next time Aledo had the ball. He began the drive with a quick sideline completion of seven yards to senior receiver Hunter Rosson. On third and eight from the Eaton 23, Bishop moved the chains with a 12-yard completion to receiver Beau Mask.

After a 17-yard gain by Owens brought the ball to the Eaton one, Bishop used his feet to get to the end zone. On the play, Bishop took the shotgun snap and immediately rolled to his left, where he was met by a blitzing Eaton defender. Bishop quickly shifted to his right and out ran the Eagles to the end zone.

With 8:23 left in the half, Daniels added the PAT to increase the AHA advantage to 28-0.

Aledo closed the first-half scoring when Bishop fired an 18-yard touchdown pass to Mask, who beat single coverage by breaking a tackle to complete the TD play. Daniels kick gave Aledo a 35-0 lead.

Carter ended Eaton’s last drive of the first half with his interception.

Owens had a big first half on the ground, gaining 192 yards on 11 carries. Bishop completed six of nine passes for 83 yards with one touchdowns and an interception. Rosson caught four passes in the first half for 53 yards.

The Bearcats held Eaton tailback Titus Swen, the area’s leading rusher, to just 18 yards on 14 carries in the opening half, while the Bearcats finished the first 24 minutes with 290 yards. Swen would not gain another rushing yard in the game.

The Bearcats also continued a defensive streak. Aledo has not allowed a first-half touchdown this season.

In the second half, Owens ripped a 61-yard touchdown run on the fourth play of the third period, and Daniels added the PAT for a 42-0 advantage.

After forcing an Eaton punt, Aledo found the end zone again. Senior running back Jake Norwood did most of  the damage on the drive with 51 yards on four carries – including a 40-yard gain -  to set up a Bishop-to-Rosson touchdown pass of 10 yards.

Will Turner booted the extra point, and with 4:13 left in the third quarter the Bearcats built a 49-0 lead.

Late in the third quarter Eaton finally got on the board. Taylor lofted a short swing pass to Swen, who turned on the jets and raced down the left sideline for an 82-yard touchdown.

However, Eaton missed the PAT as Aledo led 49-6.

The Bearcats extended the lead to 52-6 on a 30-yard field goal by Will Turner, and Eaton closed the scoring with under a minute to play on a one-yard TD run with by Dawson Pell followed by a PAT kick from Rhett Marshall.

The Bearcats then went into victory formation as Aledo won its 72nd consecutive district game to set a new state record.