LADYCATS TO STATE! Aledo shuts out No. 3 Lubbock Monterey, 3-0, in regional final 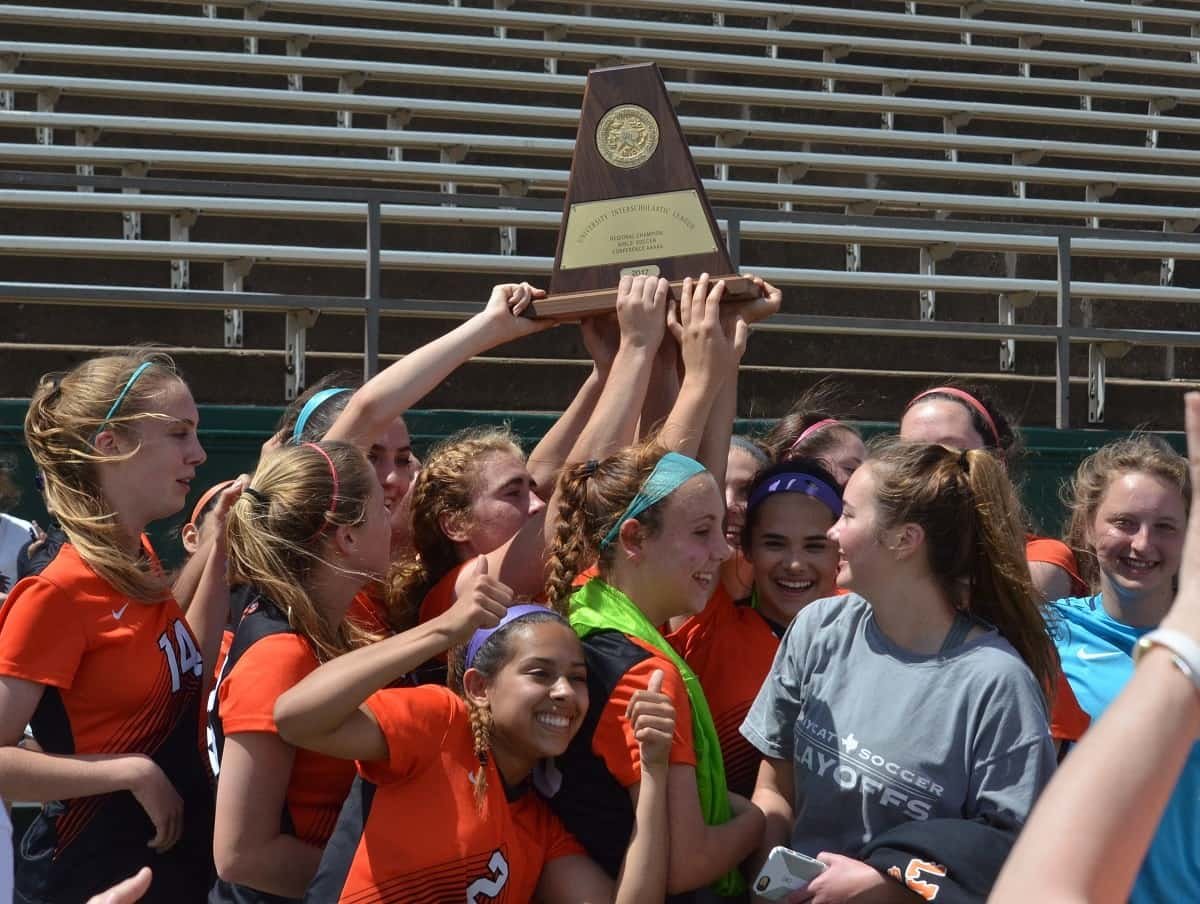 The Aledo Ladycats hold up their plaque earned after winning the Class 5A, Region I championship after a 3-0 victory over No. 3 Lubbock Monterey Saturday afternoon at Memorial Stadium in Wichita Falls. The win earns the Ladycats their first trip to the state tournament. Photo by Tony Eierdam
Posted Saturday, April 8, 2017 3:44 pm

For the first time in program history, the Aledo Ladycats soccer team is headed to the state tournament.

Aledo forward Brooke Jones scored a pair of goals and junior goalkeeper Makenzie Covington earned her fourth straight playoff shutout to lift the Ladycats to a 3-0 victory over No. 3 Lubbock Monterey Saturday afternoon in the girls’ Class 5A regional soccer final at Memorial Stadium in Wichita Falls.

The Ladycats will advance to the state tournament in Georgetown. The girls’ Class 5A state semifinal matches are scheduled for 9:30 a.m. and noon Thursday at Birkelbach Field in Georgetown. Both start time and opponent will be determined on Sunday.

“This team has worked so hard all year,” Ladycats' head coach Bryan Johnson said. “They have come on strong in the playoffs, and they deserve to play at the state tournament. The first goal we scored against (a strong) wind was huge, and Cameron’s (Huddleston) goal (the third goal) sealed the deal.

“We are … I just don’t have the words right now to explain how excited we are.”

Senior Peyton Laughley said the team enjoys playing an underdog role. The Ladycats, unranked after district play, have defeated the No. 3 (Monterey) and No. 5 (Denton) state-ranked teams in 5A by a combined score of 8-0 after today’s victory.

“We believe in ourselves,” Laughley said. “If we keep playing like we have … why not us win two more and win state? This is so exciting.”

In the first five minutes of the opening half both teams had a pair of scoring chances. Huddleston’s low blast from 20 yards on the left side was turned away by Monterey goalkeeper Jordan Flores, and another Huddleston shot flew over the cross bar.

Aledo goalkeeper Makenzie Covington had a pair of diving saves as each team tried to establish early momentum.

Almost 10 minutes into the match, Aledo forward Brooke Jones had a breakaway at the net, but Flores came out too quickly as Jones chipped a shot over Flores and the ball rolled across the goal line for a 1-0 Aledo lead.

“I saw their ‘keeper coming at me so I just popped the ball over her,” Jones said.

Although the Ladycats spent the rest of the half controlling play, Monterey had five shots on goal. Covington easily saved the first two, but she came up with three diving saves before the half ended to keep the Ladycats ahead by a goal at the break.

Jones gave the Ladycats a 2-0 lead with 27:48 left in the second half when she again found herself one on one with Flores. Again, the Monterey ‘keeper attacked Jones, who chipped the ball over her head and into the net for a 2-0 cushion.

Less than a minute later Aledo senior midfielder Cameron Huddleston blasted a shot from 20 yards out in the upper corner of the net to give the Ladycats a commanding 3-0 lead that put the match away.

“It is so exciting to go to state in my senior year,” Huddleston said. “And it is very special to be able to play with my sister (freshman Cheney Huddleston) at the state tournament.”