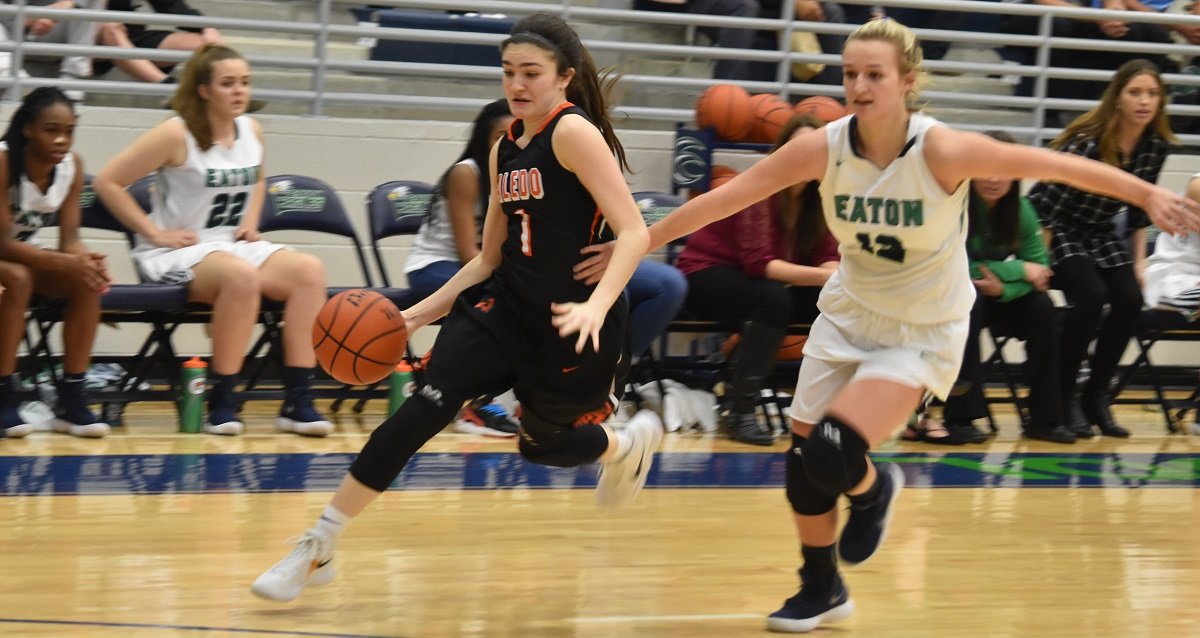 Holding Eaton to singe digits in every quarter, the Aledo Ladycats had little trouble in a 34-21 victory over the Lady Eagles in a girls' District 6-5A game Friday night at Eaton High School.

Taylor Morgan led the Ladycats with nine points, with Elizabeth Allanach adding eight. Also scoring were Janessa Payne with six points, Sarah Haeussler with five, Reagan Brown with three, Haley Herrin with two and Riley Sale with one. Haeussler also pulled down a game-high seven rebounds with a blocked shot.

Aledo led 6-5 after the first quarter, but broke the game open with 15 points in the second period to take a 21-13 lead at the half. Each team scored six points in the third quarter as the Ladycats took a 27-19 lead into the fourth period. Aledo scored the first five points in the final stanza to put the game away.

Aledo senior post Ayden Smith pulls up for a baseline jumper Friday night during the Bearcats' loss at Eaton. Smith finished with 14 points and 10 rebounds, both team highs.

Eaton went on a 15-3 run late in the fourth quarter on its way to a 63-50 win over the Aledo Bearcats Friday night in a boys' District 6-5A contest at Eaton High School.

The loss drops the Bearcats' district mark to 3-6, while Eaton raises its league record to 3-6.

Also scoring were Tre Owens with 12 points, Leo Bell with five, Cameron Yates with four, and Reid Dietrich and Truen Johnson, each with two.

The Bearcats led 13-9 after the first quarter but trailed 25-21 at the break. Paced by six points from Arrington, Aledo outscored Eaton 17-16 in the third period to cut the Eagles' lead to 41-38 after three quarters.

Smith went to work early in the fourth quarter, hitting three of four free throws. Smith drew a foul and connected on one of two free throws, but Eaton was also whistled for a technical foul on the play, and Smith was selected by head coach Fred Jones to take those shots. The senior connected on both free throws to cut the Eagles' lead to 45-44.

Aledo was also awarded possession due to the technical foul, and Owens drew a foul with 5:57 left to play and canned both free throws to give the Bearcats a 45-44 lead.

But the Eagles came back and hit consecutive jumpers to take a 48-45 lead and never trailed again. After Yates connected on a pair from the charity stripe, Eaton closed out the game on a 15-3 run to seal a 13-point win.