Ladycats run past state-ranked Denton, 5-0, to earn spot at regional tournament; Bearcats fall in third round, 1-0 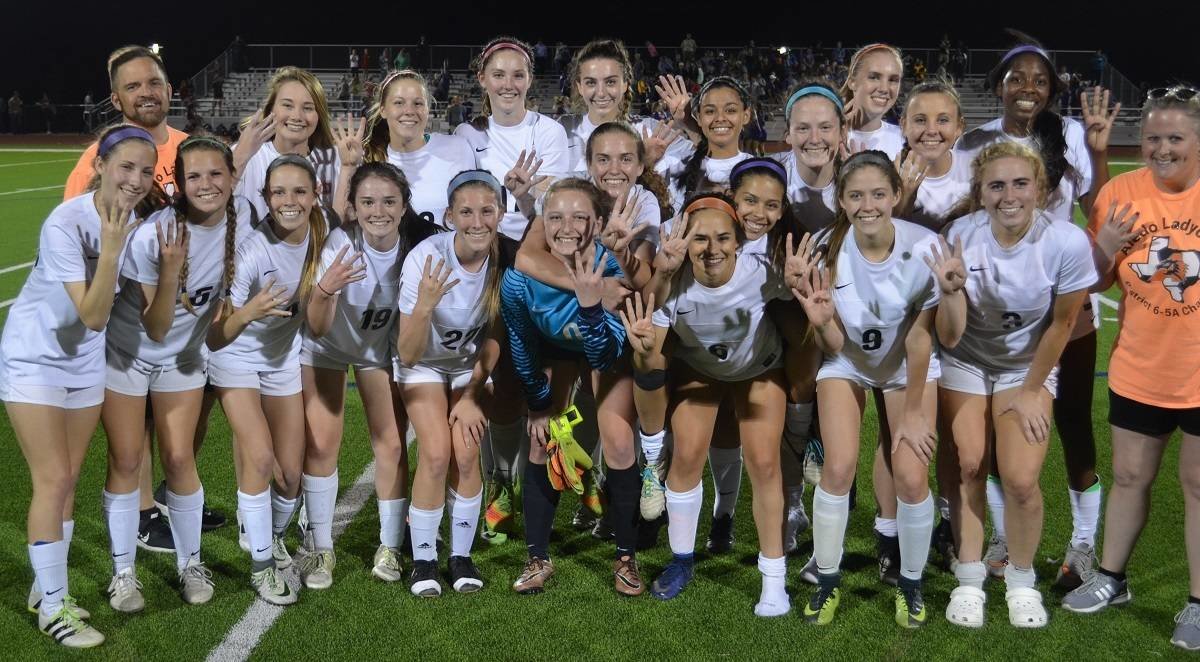 The Aledo Ladycats throw up four fingers indicating they are headed to the fourth round of the playoffs after defeating state-ranked No. 9 Denton, 5-0, in a regional quarterfinal soccer match Tuesday night. Photos by Tony Eierdam
Posted Tuesday, April 4, 2017 10:18 pm

Aledo seniors Peyton Laughley and Cameron Huddleston each scored a pair of goals to lead the Ladycats to a convincing 5-0 victory over state-ranked No. 9 Denton High School Tuesday night in a girls' Class 5A regional quarterfinals match at Eaton High School.

Laughley scored the first two goals in the opening 13 minutes of the match. She took a pass from Krista Thrasher and scored from 12 yards, and six minutes later scored on a penalty kick to give the Ladycats a 2-0 advantage.

Aledo closed the first-half scoring on a header by Huddleston as Aledo's lead grew to 3-0.

The Ladycats extended the lead to 4-0 when Huddleston slipped a pas to Eden Wise, who scored from 15 yards, and Huddleston closed the scoring on a 25-yard shot with Reagan Knesek earning the assist.

Goalkeeper Makenzie Covington earned the shutout in goal, turning back 12 Denton shots, including three from close range and with a pair of diving saves.

Wichita Falls scored a goal with 5:24 left in the first half and held on to take a 1-0 win over the Aledo Bearcats Tuesday afternoon in a boys' Class 5A regional quarterfinals match at Mineral Wells.

The Bearcats almost tied the match twice late in the first half, but one shot was blocked while another flew over the net.

Early in the second half a header by Tanner VanCuren hit the goal post and bounced out of bounds.

Goalkeeper Caleb Hill kept the 'Cats in the game with two jump saves and a pair of diving saves in the second half.

With three minutes remaining a shot by Mickey Maloney caromed off the cross bar, and three headers from inside the box in the final minute failed to cross the goal line as Wichita Falls escaped with a win.

Aledo senior Tanner VanCuren fires a shot during the first half of the Bearcats' 1-0 loss to Wichita Falls High School Tuesday afternoon in a regional quarterfinal match at Mineral Wells.