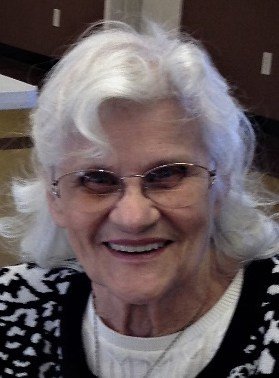 June was born April 2, 1931 in Aledo, the only daughter out of five children of

Frank and Bera Wingo. She was known for her adventurous spirit and never backing down, including playing football with the boys and having a fist fight – with a boy – after school more than once. She excelled at basketball and was the first in line to fly in that plane that landed in the field or whatever else she could find to worry her mother. She didn’t do it on purpose – she was just having the time of her life.

At age 18 she married Landon Cosby, and together they had five children. The children had a great childhood in Aledo surrounded by aunts, uncles and cousins. They recalled having great role models growing up.

June lived in Aledo until she was 37.

June met Gus Vermillion at a square dance and, because she loved to dance, and Gus loved her, they did a lot of it in their early relationship. She always said she could follow any guy on the dance floor and that was why it was so much fun.

June and Gus married in 1980 and he moved her to Van Alstyne to his home.  They did a lot of traveling together – once even on a motorcycle. They had a wonderful relationship. “Grandpa Gus” loved all her children and grandchildren and they all loved him   Gus passed away in 2008 New Year’s Eve.  He was a drummer in a local band and he was teaching June how to sing into a microphone when he had a brain aneurysm. Gus donated his body to the medical college and June chose to do the same.

A Celebration of Life will be scheduled in the future. She leaves behind children, grandchildren, great-grandchildren, family including Wingos, Cosbys, and other relatives and friends who will miss her deeply. Many have said that said that they miss her smile the most and that says a lot about her.

The family said “Our mother was a pistol! She was a no-nonsense kind of gal with a heart of gold. She loved people and she loved life.” Her granddaughter, Ashley, referred to her as the matriarch of the family. “This has left a huge hole in our world that we will be filling with memories. Any stories anyone wants to share we would love to hear.”

A look inside the two middle schools

Opportunities to Serve and Resources