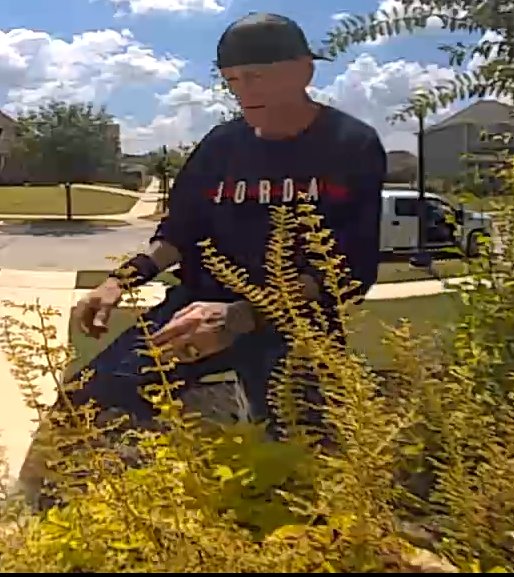 From the Parker County Sheriff’s Office

The Parker County Sheriff’s Office is seeking the public’s assistance in identifying and locating the suspects in connection with two theft and burglary cases in Aledo.

Sheriff Larry Fowler said two suspects were caught on home security camera taking a package from the porch of a residence in the 200-block of Parkview Drive.

The homeowner reported on Aug. 16 that on the previous day, unknown suspects took a package which was delivered to the home.

In the video, the suspects are seen pulling up to the home in a white, four-door, extended cab Ford F-150 pickup. The passenger exited the truck, ran to the porch, took the package, and returned to the truck, fleeing the area.

The passenger is described as a white male, approximately 40 to 50 years of age, about 6-feet tall, bald, wearing a backward Nike ball cap, a dark sweatshirt with the word “Jordan” across the front with a red stripe, dark shorts, wrist bands, and white tennis shoes. He had tattoos on his left wrist and arm and is wearing a large ring on his left ring finger.

A possibly related burglary was reported in the 400-block of Taos Court East, when the residents left the garage door open and the suspect(s) stole a weed eater and a lawn blower.

Investigators with the Sheriff’s Criminal Investigations Division want to caution the public to lock their residences, sheds, garages and vehicles.

“Unlocked homes, storage buildings, and cars are easy targets,” Fowler said. “Most suspects will bypass homes and cars if they are locked. You can prevent being a victim by making a habit of locking doors regularly. Have your packages delivered to a trusted source when someone will be home to collect the package, invest in a lock box or have them delivered to the post office to be picked up.”