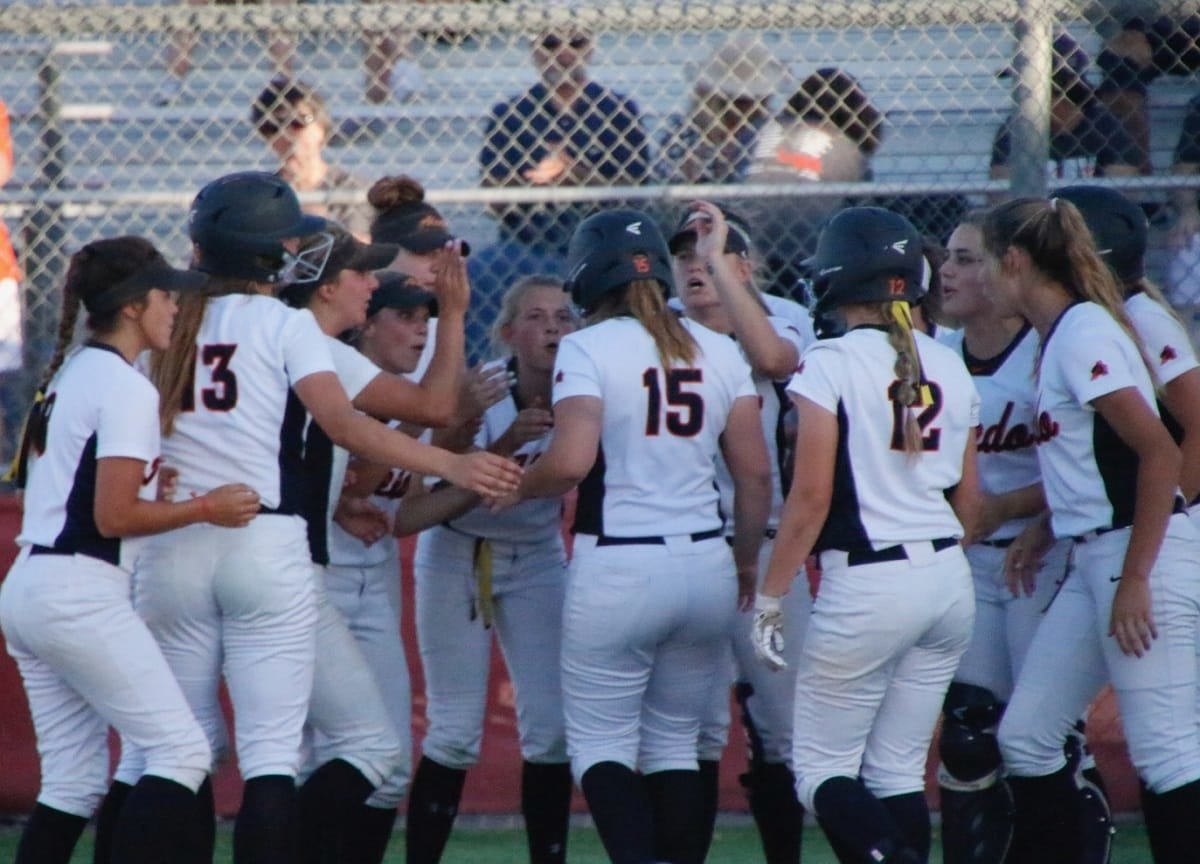 Aledo senior Hannah Andrews (15) is congratulated by her teammates after hitting a home run in the sixth inning during the Ladycats' loss to Chapin Friday in Odessa. Photo by David Andrews
Posted Friday, May 19, 2017 9:37 pm

Chapin pitcher Kristin Fifield hit a pair of home runs, including a homer in the eighth inning that turned out to be the winning run, to lead the Lady Huskies to a 7-5 win over the Aledo Ladycats Friday night in a one-game regional semifinal softball game at Odessa.

Chapin will advance to the regional finals and face Canyon.

Aledo had forced extra innings with two runs in the bottom of the seventh inning before Chapin ended the contest in the eighth.

"Our girls never quit," Ladycats head coach Heather Oakes said. "They don't know the word quit. That word is not in their vocabulary. It doesn't mater what the score is, they always know they always have a fighting chance."

Starting pitcher Andrews retired the first two Chapin batters in the eighth inning before Fifield blasted a home run over the center-field fence. Chapin added a double and manufactured another run for a two-run cushion. In the bottom of the eighth, Fifield allowed a one-out single to Macy Hale as Aledo had the tying run at the plate.

But Fifield fielded a hard ground ball up the middle to the next batter and began what turned out to be a 1-6-3 double play to end the game.

"This has been a successful season," Oakes said. "But right now it is bitter sweet ... and I feel for the seniors. I am so proud of all of the girls, and everything they have done this year is praise-worthy. They are fighters."

Chapin led 3-0 after the second inning thanks in part to a solo homer by Fifield in the second. Aledo cut the lead to 3-1 when Caden Cunningham drove in Megan Reynolds with a base hit in the bottom of the fourth inning.

Chapin added a run each in the fifth and sixth innings to take a 5-1 lead. But the Ladycats came back with two runs in the sixth on back-to-back solo home runs by Reynolds and Andrews, respectively, to cut the lead to 5-3.

Andrews retired Chapin in order in the top of the seventh frame to give her team a chance to tie the score in the bottom half of the inning.

A double each to lead off the inning from Lindsey McElroy and Mykayla Stroud cut the lead to 5-4. Reynolds followed with a base hit to drive in Stroud as Aledo tied the score, 5-5, and had a runner at first with no outs. But Chapin turned a double play began by Fifield and she retired the next batter to send the game into extra innings.