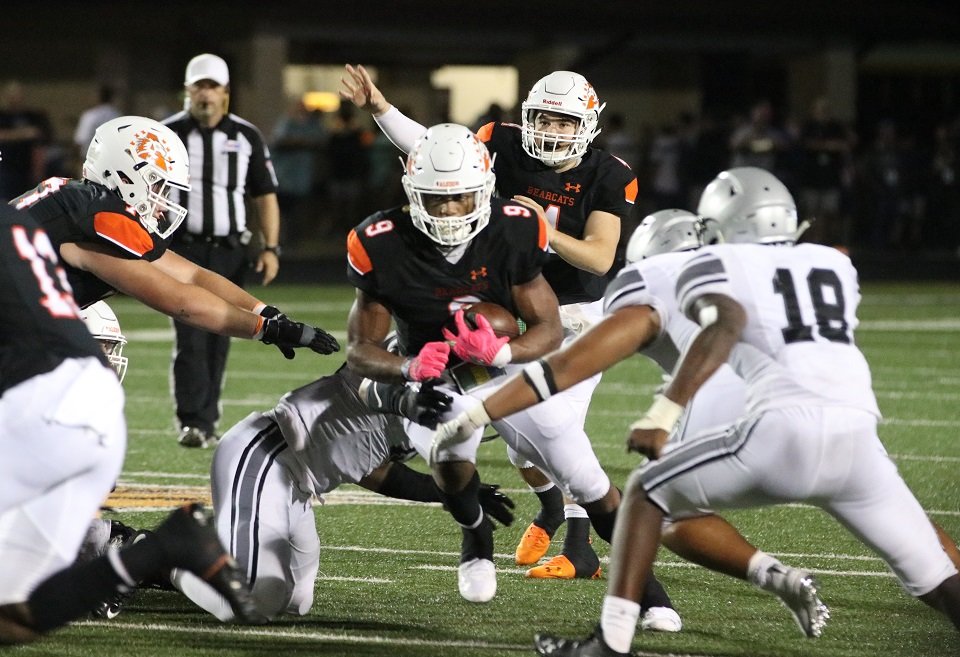 In a game that featured two strong offenses and not much defense, Class 6A No. 8 Denton Guyer, paced by 220 yards rushing by Kaedric Cobbs, outlasted the Class 5A No. 1 Aledo Bearcats, 60-57, Friday night in a thrilling season opener at Bearcat Stadium.

“We should have played better, but that’s (Guyer) a good football team,” Bearcats head coach Tim Buchanan said. “We did not play as good as we should have, and that is my fault. We had young safeties out there and we knew it, and we put a little too much on them, and they (Guyer) took advantage of it.”

In the fourth quarter, after Guyer took a 60-49 lead, the Bearcats needed two scores to win or send the game to overtime.

Senior quarterback Jake Bishop converted two third down passes in Aledo’s ensuing drive but faced a fourth down and 18 from the Guyer 37. Bishop tossed a pass to the middle to McClellan, who swiftly cut to his left after the catch and outran the Wildcats’ defense to the end zone with 2:23 left to play.

Receiver Jo Jo Earle ran in the two-point conversion on a direct snap to cut the visitor’s lead to 60-57.

Guyer recovered the Bearcats’ onside kick but gave the ball away on downs on the Aledo 22, giving Bishop and the Bearcats a final possession but with just 40 ticks left on the game clock.

On first down, Bishop tossed a pass to the left side to Money Parks for a 13-yard gain, then found receiver Jaedon Pellegrino for a two-yard gain.

On the last play of the game, Aledo used trickery. Bishop fired a pass to Pellegrino on the left hash, and the senior turned around and tossed the ball backwards to a trailing Earle. But Earle ran into a crowd just past midfield and lost the ball, and Guyer recovered as time expired to hang on for the win.

“I thought we had a chance at the end, but we just ran out of time,” Buchanan said.

On the game’s opening possession it took Guyer just two plays to find the end zone.

Quarterback Eli Stowers tossed a screen pass to running back Kaedric Cobbs, who hustled 23 yards down the left sideline to the Wildcats’ 48. On the next play, Stowers threw deep to receiver Seth Meador, who cradled the pass on the run and beat a single defender to the end zone for a touchdown with 11:43 left in the opening period.

The Wildcats lined up in a swinging gate formation for the conversion attempt, and Cobbs took a direct snap and crashed over the goal line to give his team a quick 8-0 lead.

However, the Bearcats answered. Aledo came back with a four-play, 71-yard touchdown drive that ended almost the same way as Guyer’s opening drive.

On the fourth play of the drive, with the ball on the Aledo 39, quarterback Jake Bishop threw the ball deep to streaking receiver Parks, who caught the ball in stride to complete a 61 yard touchdown play.

With 10:24 left in the first quarter, Micco Little booted the extra point to cut the Wildcats’ lead to 8-7.

When Guyer got the ball back, Cobbs took over. The senior tailback carried five times on the seven-play drive for 41 yards, the last seven yards off left tackle and across the goal line with 7:54 remaining in the opening period.

Again, Cobb took a direct snap on the conversion, and the 205-pound back bullied his way over the goal line to extend the lead to 16-7.

After Guyer forced a Bearcats punt, the Wildcats found the end zone again, and on another deep pass. Stowers again went to Meador down the middle, who caught the pass on the run to complete a 29-yard touchdown. The PAT was blocked, and with 2:51 left in the first quarter the Wildcats held a 22-7 advantage.

On the Bearcats next possession, McClellan went to work. The senior carried five times in the first seven plays for 22 yards, and after Bishop completed a 21-yard pass to Earle the Bearcats had the ball first and goal from the visitor’s 5.

Two plays later, McClellan ran into a pile at the 1, but the big back carried the pile of Guyer defenders into the end zone for a touchdown with 9:52 left in the opening half. Little added the PAT to cut the Guyer lead to 22-14.

The teams followed by trading TD drives. Guyer ended a six-play, 70-yard drive on a 38-yard touchdown pass from Stowers to receiver Travis Romar. Once again, the Bearcats blocked the PAT, and with 7:18 remaining in the half the Wildcats increased their lead to 28-14.

Aledo countered with a 50-yard, seven-play drive for a score. The drive was set up by a 40-yard kickoff return by Earle. A 10-yard scramble by Bishop followed by a Bishop-to-Parks completion for 12 yards brought the ball to the Guyer 13.

On the next play, Earle – lined up behind center – took a direct snap and scooted 13 yards to the end zone, putting on a nifty spin move to fool two defenders at the five-yard line before waltzing across the goal line with 3:34 left in the half.

Guyer wasted little time to regain its two-touchdown lead. On the third play of the drive, Stowers connected with Meador for a 48-yard gain to the Bearcats’ 3. On the ensuing play, Stowers tossed a shuffle pass to receiver Deuce Harmon for a three-yard TD.

Cobbs ran in the two-point conversion, and with 1:45 remaining in the half the Wildcats led 36-21.

With little time left in the half, the Bearcats followed with a frantic, four-play, 69-yard touchdown drive, which ended five-yard touchdown run off right tackle by McClellan.

The big play in the drive was a 44-yard screen pass from Bishop to McClellan. Little kicked the extra point to cut the Guyer lead to 36-28, where it remained at the half.

The Bearcats struck first on the opening drive of the third quarter. The six-play, 58-yard drive ended on a nine-yard run off right tackle by McClellan, who took a handoff off right tackle and sharply cut to his left and raced down the middle untouched to pay dirt.

In keeping with the nature of the game, Guyer came right back and found the end zone on a nifty flea-flicker play. Guyer quarterback Stowers handed the ball off to Cobbs, who took two steps forward, stopped, and lateralled the ball back to Stowers, who hit Meador on a crossing route.

Meador broke a tackle and sprinted the rest of the way to complete a 38-yard TD play. Cobbs ran in the conversion to extend the lead to 44-34 with 8:04 left in the third period.

Not to be outdone, the Bearcats followed with a seven-play TD drive that was closed on a one-yard plunge by McClellan, who went untouched into the end zone with 3:58 left in the third. Little added the PAT to cut the lead to 44-41.

Guyer added a score before the third quarter ended. Tailback Byron Phillips completed a five-play drive with an eight-yard TD run, and Cobbs ran in the conversion to increase the lead to 52-41, where it remained after three quarters.

The see-saw nature of the game continued as Aledo needed just five plays to reach the end zone. On third and six, Bishop dropped back to pass but instead raced up the middle of the field past five surprised Guyer defenders for a 34-yard touchdown seven seconds into the fourth period.

Guyer, however, came marching back down the field as Stowers completed a 24-yard pass, ran for another 16 yards and threw an eight-yard completion to bring the ball to the AHS 8. Two plays later, Cobbs rumbled for a three-yard TD and ran in the two-point conversion to give the Wildcats a 60-49 lead with 6:54 remaining in the contest.