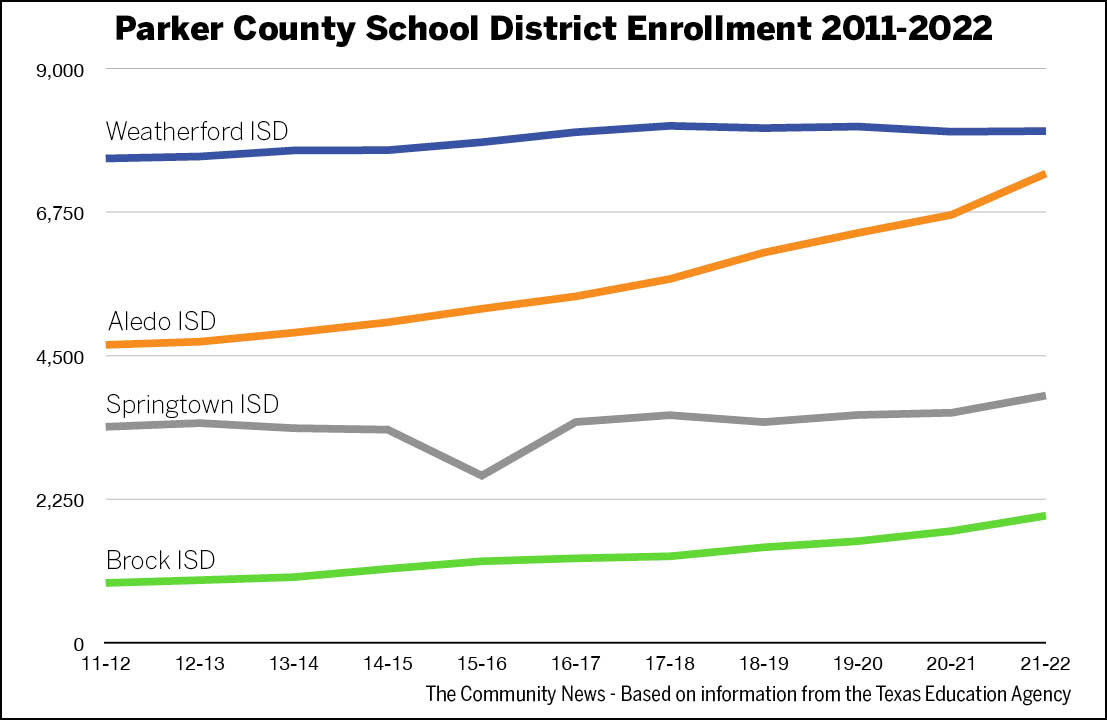 I couldn’t help but feel a bit of panic when I covered last week’s Aledo ISD School Board workshop, wherein the district’s demographers gave their predictions about enrollment numbers for the next 10 years.

The things we’ve been saying for years were going to happen are happening — it’s no longer theoretical, and it’s going to change the fundamental nature of the community.

Folks have so grown accustomed to the Aledo “brand,” but what happens when there is a second high school, as there will most likely be sometime in the next six years or so?

We have a few years to get used to the idea of a second high school with a second mascot, and perhaps a new, friendly, inter-school rivalry.

In the mean time, if the trends continue, in a couple of years Aledo ISD will be the largest school district in Parker County, and most likely be 6A.

I did some amateur charting, looking at Aledo, Springtown, Weatherford, and Brock ISDs and their enrollment numbers over the past 10 years.

Seeing it in graph form was a bit startling, and you’ll see it with this column.

One of the things I hope we don’t lose is the “Aledo Way.” This community has its roots in a behavioral ethic that is generous, compassionate, and courteous. As we reach the point that “newbies” outnumber community veterans, it will be incumbent on us to educate our new neighbors on the local ethos.

Of course, community newspapers around the state and around the country play a critical role in community cohesion and self-identity, and we don’t take that mission lightly here.

Our communities have done as good a job as can be expected in preparing infrastructure, zoning, and local amenities to accommodate the growth. But those are physical things. It’s up to the rest of us to maintain the intangible infrastructure that has made the community so vital and responsive to the needs of its residents.

We need to keep supporting organizations like the Aledo Children’s AdvoCats, the Thanksgiving Trot, and other organizations that respond to community needs.

With the growth in population will come growth in social issues that we will need to find ways to deal with.

We will look for ways to respond appropriately as a newspaper, and we look forward to hearing ideas from members of the community on how to welcome the wave of new neighbors that are headed our way.

All of the above being said, there are others among us who don’t seem to understand the concept of looking out for your neighbors.

Right now we live in a tinder box as far as fire danger is concerned. The county appropriately banned the discharge of fireworks to the extent Texas law would allow, and the state stepped in and extended the ban under an emergency declaration.

I feel for the first responders who have gone out in blazing heat on extended shifts in heavy gear to fight fires caused by the irresponsibility and stupidity of others who put the responders’ lives and their neighbors’ property in danger.

Surely we are better than that.