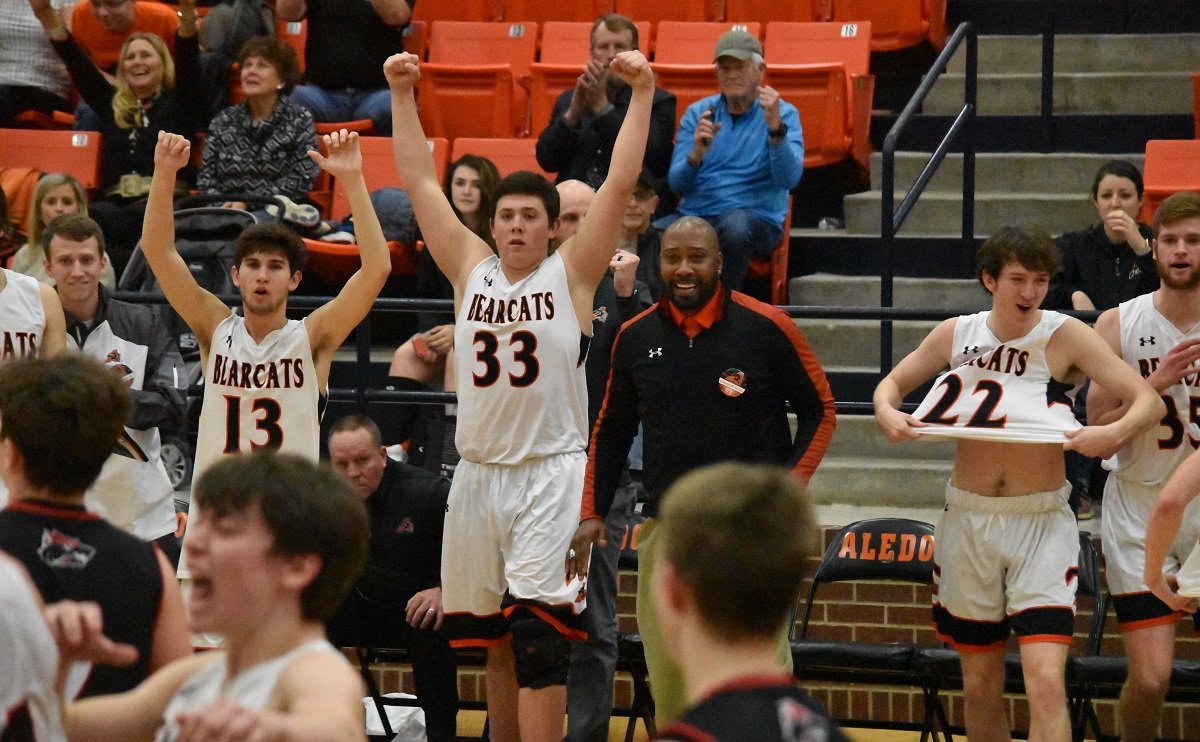 For the first time in five years, the Aledo Bearcats basketball team will be competing in postseason play.

Sparked by a defense that allowed single digits in three of four quarters, the Aledo Bearcats secured a play off berth with a 37-36 victory over Wichita Falls High School in a boys' District 4-5A basketball game Friday night at Aledo.

The win raises the Bearcats' district mark to 4-2, while WFHS drops to 1-5. As a result, the Bearcats - currently in second place and one-half game ahead of idle Abilene Wylie - have sealed a playoff spot with two games remaining.

"I am so happy for our kids," Bearcats head coach Fred Jones said. "I cannot say enough about our kids. The work that they have put in during the last couple of years...this is a testament to their hard work and commitment.

"I am very happy for the senior class, who were freshmen when I got to Aledo. The guys handled a lot of adversity tonight, but they kept playing through it. I have to tell you every guy - from the starters to the guys cheering hard on the bench - made a difference in this game.

"We got back to our basics on defense, and we felt like that would be our staple. We knew we had to get stops, and we did, especially at the end. I am proud of these guys."

With the Bearcats leading 37-36, Wichita Falls held possession and tried to work the clock down to a final shot to decide the game. But with 16 seconds left in the game the Coyotes missed a shot, and guard Max Newell came up with a huge rebound.

The Coyotes, which had only four team fouls, fouled AHS three times in the last 15 seconds - the seventh foul with four seconds left - which put Aledo post Truen Johnson on the free throw line.

Johnson missed the front end of a one-and-one but Newell again came up with a big rebound before passing the ball to JW Comiskey who was fouled as time expired as the Bearcats rushed the court in celebration.

"All year, Max has stepped up for us," Jones said. "He always competes, and he went and got what we call a 'go get it ball' twice in the last few seconds."

Johnson led the Bearcats with 15 points while pulling down seven rebounds. Jones showed his confidence in Johnson by leaving the senior in the game after he collected his fourth foul midway through the fourth quarter.

"Truen is a warrior," Jones said. "He battles every day in practice and in every game. What he brings to the table is a testament to our program. We always talk about being great in the classroom and having great character - and Truen is an excellent example of that - and every game he seems to make special plays.

"I wasn't in any way taking him out of this game. I knew he would do something to help us in the end."

The Bearcats led 10-9 after the first quarter but fell behind 21-19 at the half. Led by five points from Austin Hawkins and four from Johnson, Aledo outscored WFHS 12-8 in the third period ot take a 31-29 lead into the fourth quarter.

After Newell canned a short jumper to give the Bearcats a 35-34 lead, the Coyotes came back with a bucket for a one-point advantage.

But with two minutes left to play Hawkins sent a crafty pass to Johnson, who scored on a layup from the left side to give the 'Cats a 37-36 lead that set up the frantic ending.

Also scoring were Hawkins with 10 points, Reid Dietrich with five, Newell with four, and Tre Owens, Cole Nitsch and JW Comiskey, each with one.

Aledo junior Melia Miller breaks down the court during the Ladycats' win over Wichita Falls High School Friday night in a girls' District 4-5A game at AHS. Photo by Tony Eierdam

The District 4-5A champion Aledo Ladycats cruised to a 51-39 victory over Wichita Falls High School Friday night in a girls' district game at Aledo.

The win raises the Ladycats' district record to 7-0. The Ladycats will conclude district play Tuesday at Wichita Falls Rider.