Bearcats roll past Chisholm Trail, 69-0, in District 6-5A opener 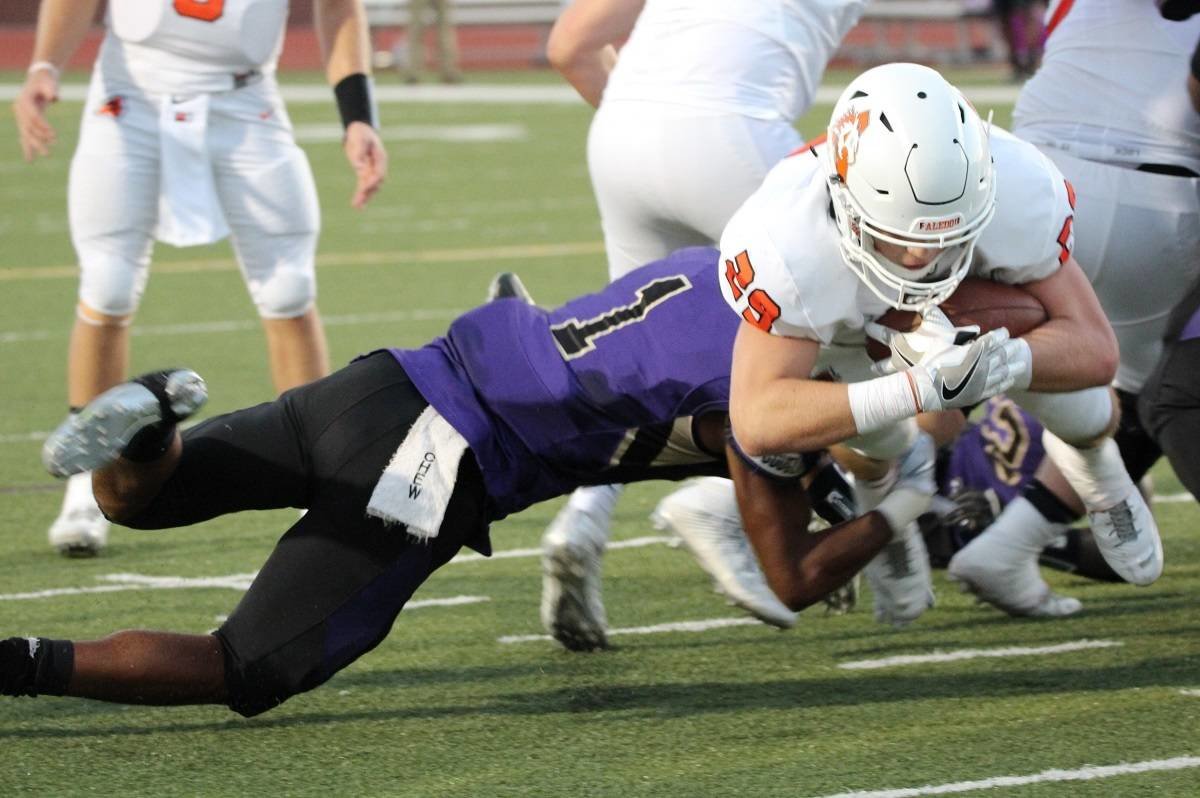 Aledo running back Will Greenwood (29) crashes over the goal line from a yard out during the Bearcats' 69-0 victory over Chisholm Trail Friday night in the District 6-5A opener at Ranger Stadium. Photo by Karen Towery.
Posted Friday, September 23, 2016 11:10 pm

It looked the same at halftime as it has been for many of the 62 consecutive district games won by the Aledo Bearcats.

The state-ranked No. 2 Bearcats, who have not lost a district contest since  2007, went to the air and dominated on the ground in a 69-0 victory over the Chisholm Trail Rangers in the District 6-5A football opener for both teams Friday night at Ranger Stadium.

The game was over at the break. Aledo led 48-0 at halftime, piling up 361 total yards while the Bearcats Black Shirts held the Rangers' offense to just 37 total yards.

"The defense was outstanding," head coach Steve Wood said. "And when the No. 1s went out and the No. 2s had to stop a short drive, they moved (Chisholm Trail) backwards. I am very proud of our entire defense. Our offense didn't do too bad either. Dillon (Davis) was on, our receivers were catching everything and once again our offensive line (Chuck Filiaga, Truett Knox, Carter Tillman, Seth Strickland, Drew Barton) dominated the line of scrimmage."

Indeed. The Bearcats O-line paved the way for tailback Donnie Evans, who rushed for 100 yards on 16 carries with three touchdowns in the first half. Davis completed 12 of 18 passes in the first half for a whopping 248 yards and a pair of touchdowns, both to senior wide receiver Logan Bridges.

Davis finished 14 of 20 for 317 yards and the two TD passes. Bridges was another big part of the first-half story with six catches for 146 yards and two TDs.

Although Aledo kicked off to begin the game, it did not take long for the Bearcats to reach the end zone.

Aledo senior Jason Munoz recovered a Chisholm Trail fumble on the opening kickoff, and three carries by Donnie Evans brought the ball to the Rangers’ 2. On fourth and one from the two, Davis handed the ball to Rhett Harris, who came in as a running back, and behind a block from James Williams scooted two yards around right end and into the end zone with a little more than 10 minutes remaining in the opening period.

Quinn Davis booted the extra point as the Bearcats jumped out to a quick 7-0 lead.

On the Rangers’ first play from scrimmage, quarterback Jake Norwood was intercepted by Aledo sophomore cornerback Brannon Webb at the AHS 44.

It took just two passes from Davis to Bridges for the Bearcats to find the end zone again. Davis and Bridges connected on a 37-yarder on first down, and on the next play Davis beat an all-out blitz and got the ball to Bridges, who easily beat single coverage for the score with 9:20 left in the first quarter.

The extra point kick failed on a bad snap as Aledo led 13-0.

After the Bearcats forced the Rangers to punt on their ensuing possession, the Aledo offense went to work. Evans carried twice to get the ball down to the CTHS 47, and on the next play, Davis fired a deep pass down the right sideline to Bridges. The senior ran past double coverage and hauled in Davis’ pinpoint pass before waltzing into the end zone with 4:12 left in the opening quarter.

Davis added the PAT to increase the lead to 20-0.

Chisholm Trail continued to have trouble hanging on to the ball. The Rangers fumbled on the first play of their next drive, and the ball was recovered by AHS defensive end Michael Arlt at the CT 4. Two plays later, Will Greenwood crashed over the goal line from a yard out, and with 3:34 left in the first quarter Reed Vierling booted the extra point to extend the lead to 27-0.

Evans carried for 21 yards on two carries to bring the ball to the hosts’ 3, and the junior finished the drive with a one-yard blast up the middle for a touchdown with 11:56 left in the second period.

Once again, the Bearcats Black Shirts forced a three and out as the Bearcats took the ball over on their own 45.

Two plays into the drive Davis sent a tall, long spiral down the middle of the field, and a sprinting Rosson ran under the pass, caught it at the CT 5 and dived toward the goal line where officials marked the ball at the CT 1. On the next play, Evans walked in the end zone off right tackle, and Vierling added the PAT to increase the lead to 41-0 with 8:42 left in the half.

Aledo closed the first-half scoring on an eight-play, 81-yard drive that ended on a 10-yard TD run by Evans.

Davis began the drive by completing three straight passes – two to Bridges for 16 and 18 yards, respectively, and the third to Preston Jefferis for 17 yards which brought the ball to the hosts’ 30. After an incomplete pass, Davis connected for 11 yards to Rosson and another to Bridges for nine yards to the CT 10. Evans scored on the next play with 50 ticks left on the clock.

Davis added the PAT as the Bearcats took a 48-0 lead at the half.

The Bearcats did not need a play from scrimmage to get on the board the first time they touched the ball to begin the second half. Evans returned the opening kickoff of the second half 80 yards down the left sideline, sprinting past several would-be tacklers on his way to pay dirt.

Vierling tacked on the extra point to increase the AHS advantage to 55-0.

The Bearcats' defense again forced a three and out, and it took the Aledo offense just four plays to score.

Consecutive runs by Evans - who finished with 127 yards on 18 carries - moved the ball from the Aledo 4-yard line to its 31. Davis followed with a completion of 25 yards to Rosson to bring the ball to the hosts' 44.

On the next play senior receiver Preston Jefferis manhandled the Rangers' secondary. On first down, Davis threw a towering spiral that was headed to the goal line. However, Jefferis was double teamed, but he used his 6-5 frame to leap high in the air as he came down with the pass in the end zone for a spectacular 44-yard touchdown reception with 9:00 left in the third period.

Davis added the PAT to extend the Bearcats' lead to 62-0.

Aledo closed the scoring when quarterback Zane Hayden sprinted around right end for 14 yards, diving through a Ranger defender to earn the touchdown. Vierling booted the extra point as the Bearcats' cushion grew to 69-0.

Aledo defensive end Michael Arlt (30) brings down a Chisholm Trail ball carrier during the Bearcats' win over the Rangers. Photo by Karen Towery.

Aledo junior running back Donnie Evans runs through a huge hole Friday night during the Bearcats' 69-0 victory over the Rangers. Evans rushed for 127 yards on 18 carries with two touchdowns. He added another TD on an 80-yard kickoff return. Photo by Karen Towery.