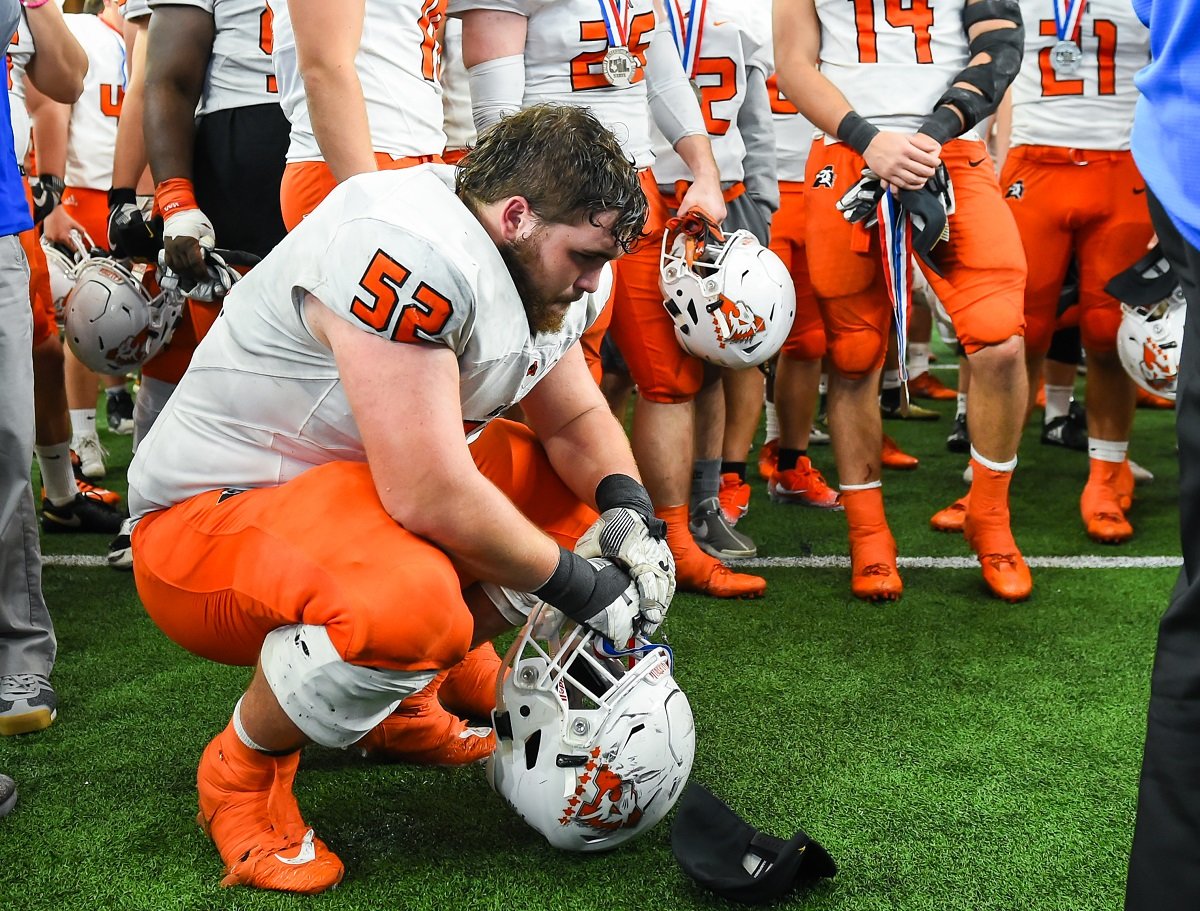 Aledo head coach Steve Wood said it best at the state championship game post-game press conference when he stated that “two or three plays often make the difference in a game when two good teams play.”

Plagued on special teams and with missed opportunities on offense and defense and a possible missed fumble call late in the game, the Aledo Bearcats fell to the College Station Cougars by the slimmest of margins, 20-19, Saturday afternoon in the Class 5A, Division II state championship game at AT&T Stadium in Arlington.

In only its fourth year of playing varsity football, College Station (14-2) won its first state championship.

“We tell the guys all the time that one, two or three plays in a game can make the difference in the game,” Wood said. “We tell them to play each play like that is the most important play of the game.”

Wood said there is no shame in losing a state championship game, and he would not blame a single play or player for the loss. The Bearcats missed two extra points and dropped potential interceptions, including one that looked like a sure “pick-6” in the fourth quarter.

But what also hurt the Bearcats in the final stanza was an apparent fumble by College Station quarterback Marquez Perez that Aledo thought it had recovered. However, officials ruled Perez’s knee was down.

The play occurred when Aledo trailed 20-19. But Wood said the Bearcats had plenty of chances to regain the lead. College Station forced Aledo to punt on its next two possessions and forced the ball over on downs the next time the ‘Cats had the ball.

Aledo’s final chance to win the game came when the Bearcats had the ball at their own 40. But a spiked ball to stop the clock followed by an incomplete pass ended the final chance at the school’s eighth state football championship.

“The game came down to a few mistakes,” Wood said. “You take out two plays, maybe three, and (that could have made the difference in the game). Yes, we made some special teams mistakes, and on that kickoff return (that set up College Station’s go-ahead touchdown) we kicked to the wrong guy (Jaelin Campbell), but we should have made a tackle, made a play.

“But right now, I hurt for the kids. If you have ever been in between the white lines you understand how bad this hurts. These guys were committed, and they have laid it all on the line. I truly hurt for them and feel I let them down.”

The Bearcats finish with a 15-1 record, and the loss stops a 31-game winning streak dating back to the season opener in 2016. Aledo has played in four of the last five state championship games.

“We have been fortunate through the years,” Wood continued. “My biggest hope is that we have been humble and gracious winners through this run, and I hope we can handle this the same way. This is what athletics teaches and the lessons that you learn. When you get knocked down, what do you do? You get right back up.

“We are not going to make any excuses and I am not going to throw anybody under the bus. Football is a team sport … I am just sorry for our kids.”

College Station led 20-19 and with 10:26 left in the game had the ball at its own 23. After a first down, the Cougars almost lost the lead when Perez threw a quick sideline pass that was almost intercepted and would have probably been returned for a touchdown, but fortunately for College Station, the pass was incomplete.

College Station received another break with under a minute left to play. Perez appeared to have lost a fumble that was recovered by Aledo. But the officials ruled Perez down to keep the drive alive.

After the Cougars punted the ball, Aledo had just 19 seconds with the ball at its own 27. Three plays later, College Station was celebrating its first state title.

College Station finished with 315 total yards to Aledo’s 303. CSHS running back DaDa Anderson gained 109 yards on 14 carries with two touchdowns and was named the MVP on offense. CSHS defensive tackle Ben Wolz was named the defensive MVP with seven tackles and a pair of sacks.

College Station led 13-7 at the half, but it did not take long for the Bearcats to tie the game.

The Bearcats received the second-half kickoff and began a “drive” at their own 24. On first down, sophomore running back Jase McClellan, held in check in the first half, exploded off left tackle and blew past three defenders on his way to a 76-yard touchdown run to tie the game, 13-13.

However, the extra-point attempt sailed wide and the game remained tied at 13.

After forcing College Station to punt, the Bearcats took the lead courtesy of a 15-play, 63-yard drive. It was a methodical drive that displayed 14 runs and one pass. The big play in the drive was a two-yard run on fourth and two by McClellan for a first down.

On the 15th play of the drive, McClellan crashed over the goal line from two yards for a 19-13 lead. However, special teams’ frustration continued as the extra-point attempt sailed wide as Aledo held on to a six-point lead, 19-13, with 1:49 left in the third period.

On the ensuing kickoff, Campbell raced 78 yards on the return where he was tackled on the Aledo 17. Later in the drive, CSHS faced a third and three at the AHS 6, but Perez found four yards off left tackle to convert the first down as the Cougars had the ball first and goal from the 2.

On the next play, Anderson went untouched into the end zone to tie the contest, 19-19, with nine seconds left in the third quarter.

And although nobody in the crowd of 28,163 knew it at the time, College Station placekicker Alan Guerrieri’s successful extra point to give the Cougars a 20-19 lead turned out to be the game-winning point.

There was no scoring in the fourth quarter.

“I am proud of our kids,” Wood said. “Again, I feel for our kids who have given us everything they had all year.”

McClellan finished with a game-high 141 yards on 22 carries with a pair of TDs. Sophomore quarterback Jake Bishop completed seven of 14 passes for 77 yards and a touchdown while also adding 82 yards on the ground on 14 totes. Money Parks caught three passes for 45 yards and a score to lead AHS receivers.

The first quarter was a stalemate, with neither team scoring. Both teams had the ball twice and were forced to punt on both occasions.

But in the second quarter, both teams found points on their respective third drives.

The Cougars went on a 16-play drive where they converted six first downs on a mix of passes and runs. But the drive stalled at the Aledo 18, and Guerrieri salvaged the drive by connecting on a 35-yard field goal to give the Cougars a 3-0 lead with 11:14 remaining in the second quarter.

The Bearcats answered with an eight-play, 68-yard drive that ended on an 18-yard touchdown pass from Bishop to receiver Parks. On the play, Parks caught the pass at about the 10-yard line on the left hash and immediately cut toward the left sideline, finding daylight as he raced past two defenders into the end zone with 8:24 left in the half.

College Station quarterback Marquez Perez loses the football late in the fourth quarter. The ball was recovered by Aledo, but officials ruled Perez down. The Cougars held on to defeat the Bearcats, 20-19, to win the Class 5A, Division II state championship.

Bishop accounted for 46 of the 68 yards in the drive with four carries, including a 27-yard gain that put the ball in Cougars’ territory.

Cole Daniels booted the extra point to give the Bearcats a 7-3 advantage.

With 3:48 left in the half – after forcing Aledo to punt – College Station began a drive at its own 22. After a three-yard run by running back Anderson, Perez completed a pair of passes to receiver Campbell, the first for nine yards and a second for six to move the ball to the College Station 40.

On the next play, Anderson took a handoff and went to his right, cutting to the middle and breaking a tackle on his way to a 60-yard touchdown run with 2:55 remaining in the half. Guerrieri added the PAT to give the Cougars a 10-7 advantage.

With the ball at his own 24, Perez was the workhorse in the drive, passing for 42 yards and rushing for 17 yards, including a six-yard carry that brought the ball to the Aledo 1.

With College Station close to stretching its lead to 10 points, on the next play the Cougars were penalized for holding, which brought the ball back to the Aledo 11 with four seconds left in the half. College Station had to settle for a field goal, and as time expired Guerrieri kicked a 28-yard field goal to give the Cougars a 13-7 lead at the half.

College Station racked up 273 yards of total offense in the half, with Aledo gaining 100 total yards. Bishop led the ‘Cats on the ground in the half with 45 yards on eight carries. Anderson led CSHS with 103 yards on 11 first-half carries, with Perez adding 53 yards on the ground and 128 passing yards.