Local news from the heart of East Parker County
Weather brought to you by:
Log in
Football

Bearcats come from behind to defeat Midlothian 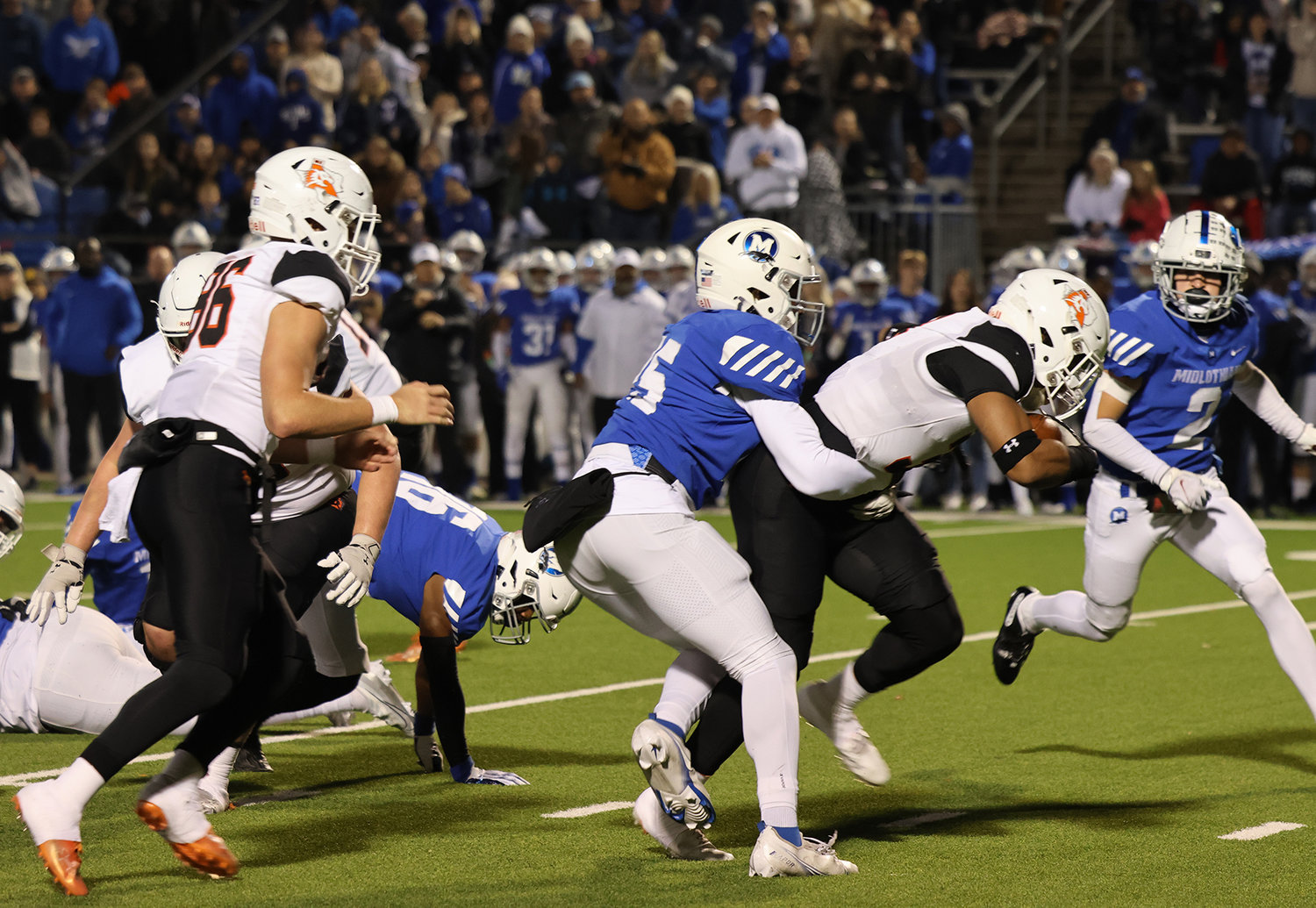 Davhon Keys wrestles past a Midlothian defender. Keys later scored what turned out to be the game-winning touchdown for Aledo. Also shown is Tyson Timms (86).
Breleigh Mayer/The Community New
Posted Saturday, November 26, 2022 12:30 am
By Randy Keck
The Community News

The Aledo Bearcats took another big step on their journey toward what they hope will be another trip to the state championship by defeating Midlothian 27-21 on Friday, Nov. 25, at Midlothian ISD Stadium.

Aledo took the opening kickoff and wasted no time getting to the end zone on their first possession.

A squib kickoff by Midlothian landed at the Aledo 32 where Kaydon Finley pounced on it.

A quick pass to Hawk Patrick-Daniels picked up 8, and a screen pass to Jalen Pope picked up another 11, putting Aledo in Midlothian territory at the 49.

Quarterback Hauss Hejny picked up another 19-yard chunk on a keeper, and three plays later Aledo found itself with a fourth down with a half yard to go at about the 20. A defensive offside penalty against Midlothian moved the ball to the 14, and from there Patrick-Daniels carried the ball to the end zone for Aledo’s first score.

Midlothian found some success on the ground on their first possession, taking the ball from their 25 to the Aledo 28 in seven plays and a penalty against the Bearcats.

Bearcats Carson Dempsey and Andrew Pankhurst took some wind out of the Panthers’ sail when they sacked the Midlothian quarterback. The Aledo defense shut down the Panthers on the next play, and with a 4th and 11 at the 34, Midlothian opted to go for a first down.

The Panthers attempted a double-reverse-pass which fell incomplete, and the Bearcats had the ball back at their 34. A penalty pushed them back to the 29, but that only added to Hejny’s 71-yard touchdown run up the middle, giving Aledo a 14-0 lead with less than two minutes left in the first quarter.

It appeared that Midlothian’s next drive might be stymied when, on a second-down play, Jake Gillespie tackled the Midlothian quarterback in the backfield. It was all for naught as the Bearcats were called for offsides.

As the second quarter began,  Midlothian broke for a 46-yard run and took the ball to the Bearcat 3-yard line before scoring on the next play, pulling within a touchdown at 14-7.

Aledo had a tough time moving the ball on the next drive, and Midlothian took the ball at their own 27 following a Bearcat punt.

Midlothian also had trouble moving the ball, and on a 4th and 3 at their 45 tried a reverse.

Defensive end Lawson Moore was having none of that, and Aledo took over at the Midlothian 32.

The Bearcats marched all the way down to the Midlothian 3-yard line, but a missed field goal gave Midlothian back the ball, and four pays later they were back in the end zone to knot the score at 14-14.

Aledo kicked off to begin the second half, and the Bearcat defense held the Panthers to a three-and-out. A botched fake punt play, resulting in a penalty against Midlothian, gave Aledo the ball only 15 yards from the end zone.

Tough Panther defense and a penalty left Aledo with a fourth down. The Bearcats lined up for a field goal, but tried a play that worked for them last year, with a pitch back to kicker Clay Murador, who took off toward the end zone. Unfortunately for the Bearcats, he was tackled at the 11-yard line, giving the ball back to Midlothian.

The Panthers put together a 13-play drive which, in addition to eating up most of the third quarter, ended in a Panther touchdown, and Aledo found itself on the short end of the score for the first time, 21-14.

On the next possession Patrick-Daniels broke free for a big gain, but a penalty called the play back, and the drive ended with a punt.

Midlothian picked up 14 yards on the next play and then let the clock run out for the third quarter.

A touchdown can change the momentum of a football game, but what happened next probably broke the momentum in Aledo’s favor for the rest of the game.

Following the touchdown, Aledo kicked off and the deep man for Midlothian opted to field the ball at the goal line. He bobbled the ball, and was crushed by the Aledo oncoming defense at the 3-yard line.

The Bearcat defense held for three plays, and Midlothian had to punt from its own end zone, giving the Bearcats the ball at the Midlothian 41-yard line.

On a third-and-10 play from the 41, Hejny hit Jalen Pope on the sideline at the 29 for a first down, but a facemask penalty pushed the Bearcats back 15 yards.

The next play, on fourth-and-one, the Bearcats snapped the ball directly to Davhon Keys, who rushed up the right side of the line for a touchdown.

With less than three minutes to play, the rest of the game was not without drama, as the missed extra point on Keys’ touchdown only put the Bearcats up by six, and the Midlothian offense had shown during the game it could put together drives on the ground.

The defense ended up stopping Midlothian when it counted most, and the Bearcats walk away with a regional semifinal victory of 27-21 against a tenacious Midlothian team.

Keys reflected on the direct-snap touchdown after the game.

“The play was designed to go left,” Keys said. “Pre snap, it looked like it was crowded. He snapped the ball, I looked left and I started to panic. I happened to glance right. I saw it was wide open. The linemen collapsed their guys, and I took off. I saw one dude, made a miss, and then got into the end zone, and it was the best moment of my life.”

When asked about the nail-biting aspect of the game, Head Coach Tim Buchanan quipped after the game that “if we're gonna have parents give up their Thanksgiving, we might as well give them a good game.”

Burleson Centennial won its game against Abilene, setting up a rematch between the two teams in the regional final, which is expected to be played at The Star in Frisco (game time TBA).