Bearcats advance to fifth-place game after 40-35 overtime victory over Arlington; will play Keller at 3 p.m. today 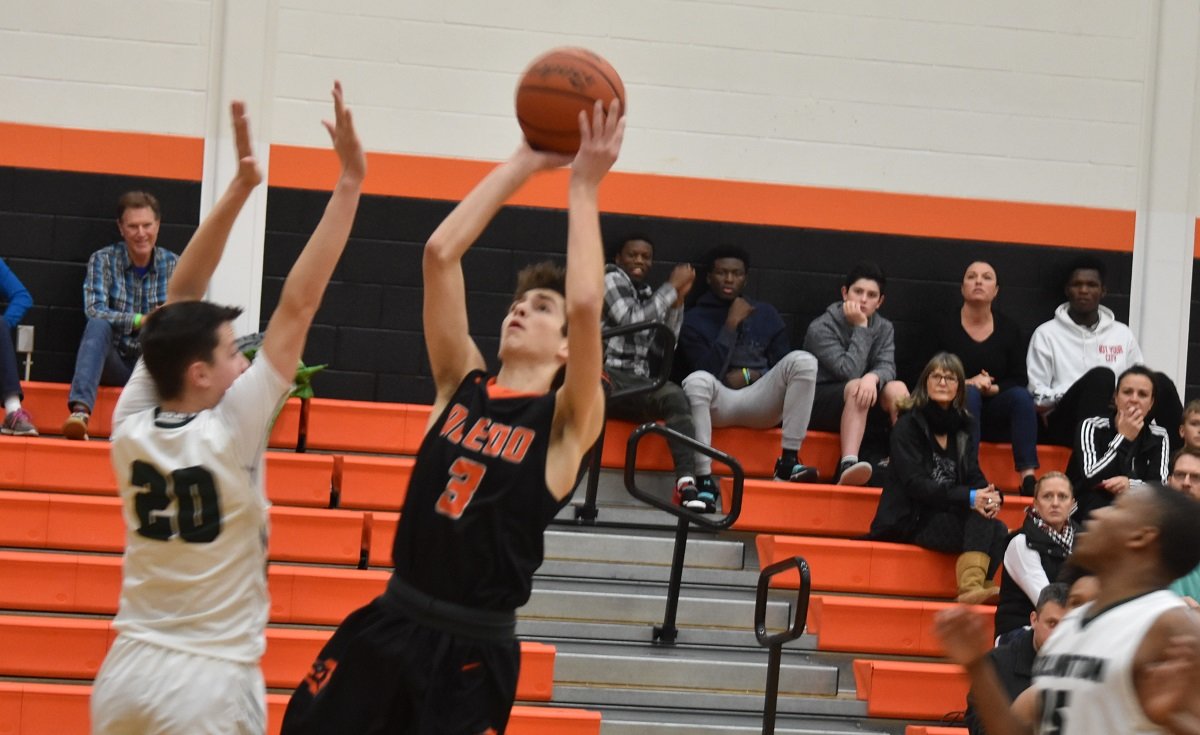 Aledo senior guard Leo Bell (3) pulls up for a jumper during the Bearcats' win this morning over Arlington. Bell hit five of six free throws in overtime to help the 'Cats to a 40-35 win. Photos by Tony Eierdam
Posted Friday, December 29, 2017 1:02 pm

Aledo senior guard Leo Bell knocked down five of six free throws in overtime to help the Bearcats to a 40-35 victory over the Arlington High School Colts this morning at the Moritz Dealerships Holiday Classic at the Aledo High School gym.

The Bearcats will play Keller in the fifth-place game today. Tip off is set for 3 p.m. at the main gym.

The Colts forced overtime by hitting a pair of free throws with 32 seconds left in regulation.

Bell nailed consecutive charity shots to begin the extra-session scoring, and after the Colts countered with a field goal, Bell was fouled again and again nailed a pair from the line to give the 'Cats a 35-33 lead with 1:12 remaining in overtime.

The Colts misfired on a jumper on their ensuing possession, and hustling guard Cameron Yates came up with a critical rebound and was fouled. The senior was true on consecutive free throws, and with 40 seconds left in OT Aledo's lead grew to 37-33.

Arlington missed on a jumper again on its next trip down the floor as Aledo post Truen Johnson came up with the rebound and was fouled. He connected on both charity shots to extend the lead to 39-33 with 21 ticks left on the clock.

For the third consecutive possession, Arlington missed on a jumper. Aledo senior post Ayden Smith came up with the rebound and quickly dished the ball to Bell, who was fouled. He hit one of two from the line for a 40-33 lead with 10 seconds remaining.

Arlington closed the scoring with an uncontested layup as time expired.

Bell led the Bearcats with 13 points, with Smith adding 12. Also scoring were Johnson with five points, Hunter Vela and Yates, each with four, and Austin Hawkins with two.

Arlington led 10-9 after the first quarter, but Aledo outscored the Colts 9-6 in the second quarter to take an 18-16 lead at the half. Arlington outscored Aledo 6-5 in the third period and 9-8 in the fourth quarter to force overtime.

Aledo senior guard Cameron Yates (1) makes a move on a defender during the Bearcats' overtime win over Arlington this morning at the Moritz Dealerships Holiday Classic at the Aledo High School gym.