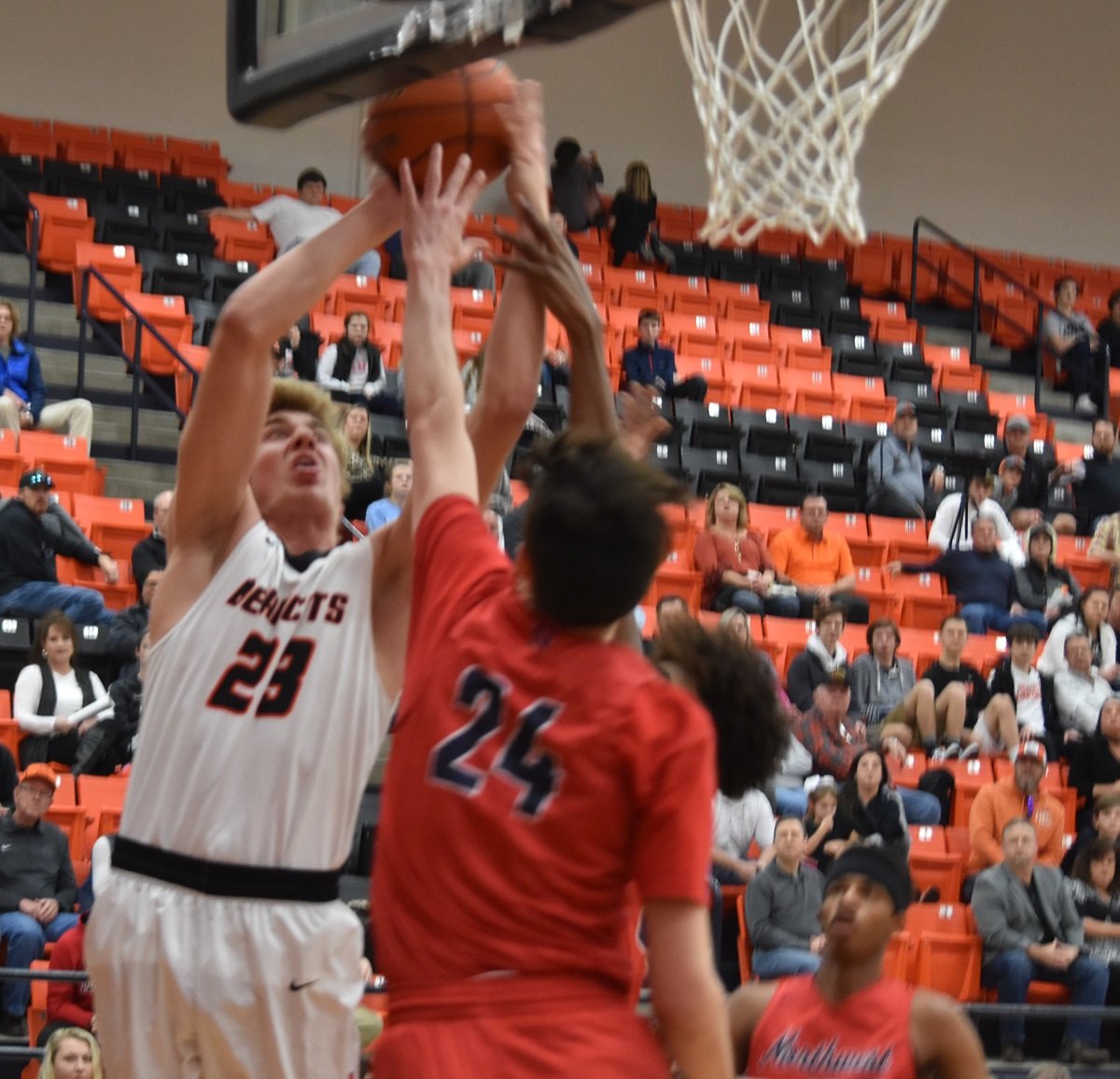 Aledo post Ayden Smith (23) goes up strong to the basket Tuesday night during the Bearcats' 52-46 loss to No. 3 Northwest. Smith led the Bearcats with 16 points. Photos by Tony Eierdam
Posted Tuesday, January 9, 2018 10:21 pm

Aledo went on an 18-9 run in the fourth quarter but fell just short as No. 3 Northwest survived a scare from the Bearcats, 52-46, Tuesday night in a boys' District 6-5A basketball game at Aledo High School.

The loss evens the Bearcats' district mark to 2-2, while Northwest remains in first place with a 4-0 record.

Trailing by 15 points entering the fourth quarter, the Bearcats went on a 15-4 run to cut the Texans' lead to 47-43 with 2:44 remaining in the game. Senior post Ayden Smith canned a pair of three-pointers in the run, with senior guards Cameron Yates, Leo Bell and Noah Arrington each adding a trey.

However, Northwest forward Mason Hix hit four of four free throws to extend the Texans' lead to 51-43. But the Bearcats were not finished. Smith drained a three from the right baseline to cut the lead to 51-46 with 29 seconds left to play.

Hix was fouled again, and he put the game away by canning one of two charity shots.

Smith led the Bearcats with 16 points, with Arrington adding 11. Also scoring were Bell with nine points, Yates with six, and Hunter Vela and Austin Hawkins, each with two.

Northwest led 18-7 after the first quarter and led 29-21 at the half. Northwest outscored Aledo 14-7 in the third period to take a 43-28 lead into the fourth quarter.

The Bearcats will continue district play at 8 p.m. Friday at Boswell.

Aledo guard Reagan Brown (24), shown being fouled Tuesday night during the No. 2 Ladycats win over Northwest, led AHS with 13 points in the 62-33 victory.

Aledo guard Reagan Brown scored a game-high 13 points and Janessa Payne added 12 to lead the state-ranked No. 2 Ladycats to an easy 62-33 victory over Northwest Tuesday night in a girls' District 6-5A basketball game at the AHS gym.

The win raises the Ladycats' district record to 6-0 as Aledo and No. 8 Boswell are locked in a first-place tie in 6-5A. Aledo will continue district play Friday at Boswell. Tip off is at 6:30 p.m.

Also scoring for the Ladycats were Taylor Morgan with 10 points, Elizabeth Allanach with nine, Sarah Haeussler and Riley Sale, each with five, Chandler Arnold with four, and Haley Herrin and Abby Losos, each with two.

Aledo led 18-7 after the first quarter and built a 35-15 lead at the break. The Ladycats outscored the Lady Texans 15-9 in the third period to take a 50-24 lead into the fourth quarter.

For the complete story on both games see the Jan. 12 issue of The Community News.