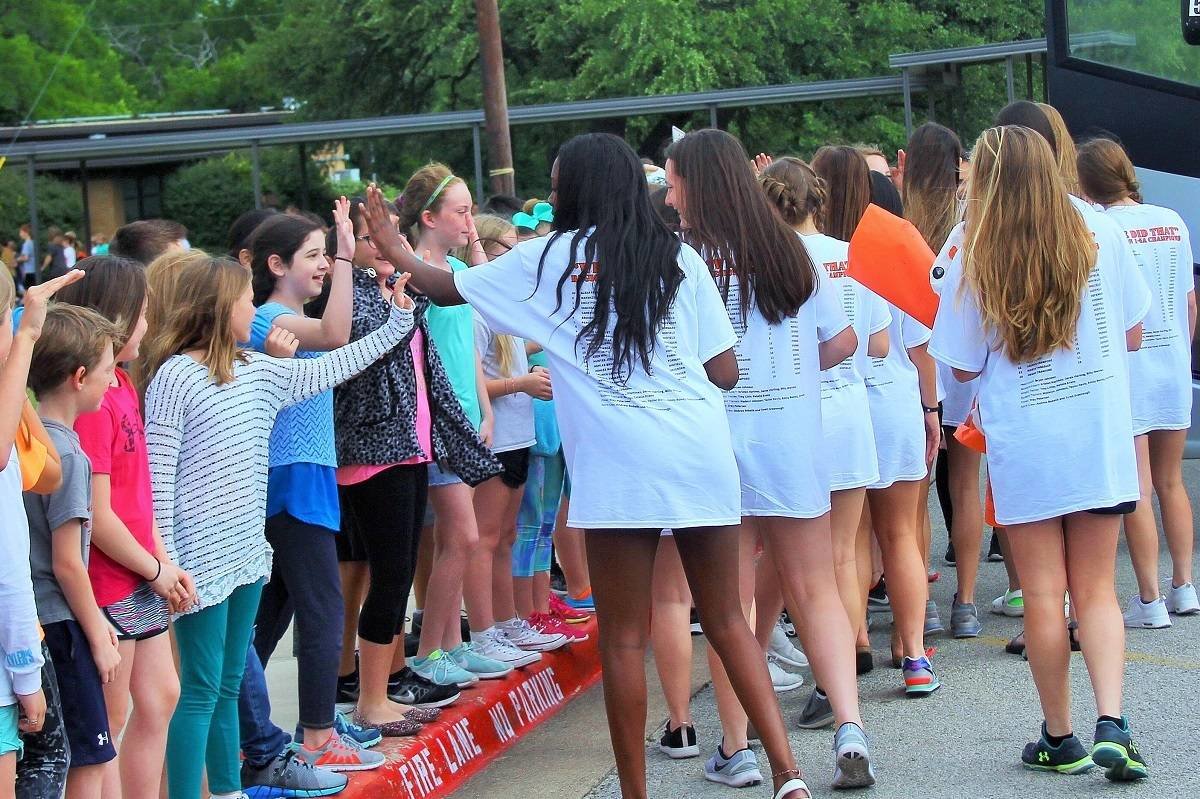 Trading high fives with their young fans, the Aledo Ladycats soccer team had a send off today at Vandagriff Elementary School. The send off began at the high school. Photo by Bailey Tovar
Posted Wednesday, April 12, 2017 12:57 pm

Last Saturday, the Aledo Ladycats soccer team produced a school first when it defeated Lubbock Monterey, 3-0, for the Region I championship which advanced the girls to the program’s first-ever state tournament berth.

The Ladycats will face the Leander Rouse Lady Raiders, the Region III champion, in a girls’ Class 5A state semifinal match. The contest is set for noon Thursday at Birkelbach Field in Georgetown.

Like the Ladycats (21-3-3), Rouse (21-1-4) has shut out four of its five playoff opponents, including their first four. Rouse is coming off a 3-2 win over College Station in the Region III final. Each team has given up just two goals in five post-season matches.

Rouse is led in scoring by senior forward Haley Hoppe, who has scored 35 goals in 24 matches. She scored twice in the regional final.

“Haley Hoppe is the real deal,” Ladycats head coach Bryan Johnson said. “She seems to be a fabulous player. She seems skilled for a young lady who is being recruited as a center back. Her high school coach must be a genius to play her up top at a center forward. (The coach) hit the jackpot with her.”

Johnson said other than Hoppe that he doesn’t know too much else about Rouse, which moved down from Class 6A this year.

“She is back and gives a goal scoring presence, and the defense obviously is playing really well. I would think they have a good keeper with the score lines I have seen. I really believe this will be a great match up. Obviously matching up with another first timer at state is a good thing, the negative is the field we play on is the field they have played on twice already for district.”

The Ladycats have been visiting the back of the net offensively. During the playoffs, Aledo has scored 20 goals while allowing just two, while Rouse has given up two while scoring 13. The Ladycats are led in scoring by Peyton Laughley (28 goals) and Cameron Huddleston (23).

“Rouse is ranked higher than us, but we haven't had any cake-walk team thus far,” Johnson said. “We just have to continue to work hard as a team and pressure the other team into making mistakes and come up with goals when we have our opportunity.

“I wish we could play every game like we did against Denton (5-0 win in regional quarterfinals), and who knows maybe we will. These girls really amp it up when they get to play tougher competition. I believe that Rouse will give us all we want and hopefully we can continue to play as we have, and who knows maybe on Saturday we will have the opportunity to play for a state title.”

The 5A state championship match will be at 11 a.m. Saturday at Georgetown.

Johnson feels that past teams and the program those individuals on those teams have built have led to the success of this year’s Ladycats.

“We are extremely blessed and over-the-moon excited to be in this situation,” he said. “There have been lots of girls soccer teams over the last 15 years that deserved this opportunity as well, but we have such great chemistry and cohesiveness it’s hard to stop us.

“So many great players have put on this Ladycat uniform over the years. Players like Ginny Hubbard, Taylor Zak, Emily Means, Brooke Hubbard, Kirby Zak, Hannaphen Park, Jordan Leech, Ashley Huhn, Taylor Gabbert, Stephanie Neeley, Kaitlin Murray, Leslie Coats, Allie Swift – just to name a few - that have pushed their respective teams and tried to go as far in the playoffs as they could.

“We play for all those teams that set the bar so high for Aledo Ladycats soccer. I hope that we can make each and every one of the former Ladycats proud and earn some respect for women's soccer in Aledo. If we get our chance we are going to take it.

“We got here so we may as well try and take the whole thing. Pressure, be first on the ball and don't let up for 80 minutes and we will see what happens.”

“It is unbelievable, and I am so proud of everyone,” Laughley said. “We came into the playoffs as underdogs, but once we started winning playoff games and believing in each other and saw how good we really are that our confidence has grown each game.

“Winning like we have the past three games has given us more confidence than we ever had. I feel we can make a few more upsets and win state. Why not us?”