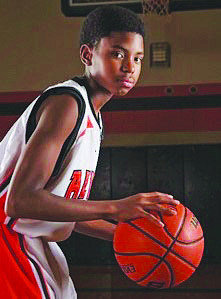 Trenten Bryce Darton, 15, departed from this world on  August 29, 2016 surrounded by friends and family while pursuing his dream of  playing basketball.

Trenten was born on July 1, 2001, in the Hampton Roads  area of Virginia. He was the first son for Johnita and Eddie Darton. It was a beautiful summer's day and the summer's light would be a symbol of Trenten's warm heart and giving spirit.

Trenten participated in numerous activities including karate, soccer, football and his true love – basketball. But his greatest gift was his ability to make everyone that he met “feel special.” He saw and focused on the “goodness” in everyone and often cheered for the “underdog” because no one else believed in them. This theme is consistently echoed in the letters from his friends, faculty and teachers at Aledo High School where Trent was a sophomore and a member of the basketball team. As a member of the “Bearcat” community Trenten embraced excellence and service. He displayed a love and passion for the Lord at an early age and was baptized December 27, 2015 at Pilgrim Valley Missionary Baptist Church.