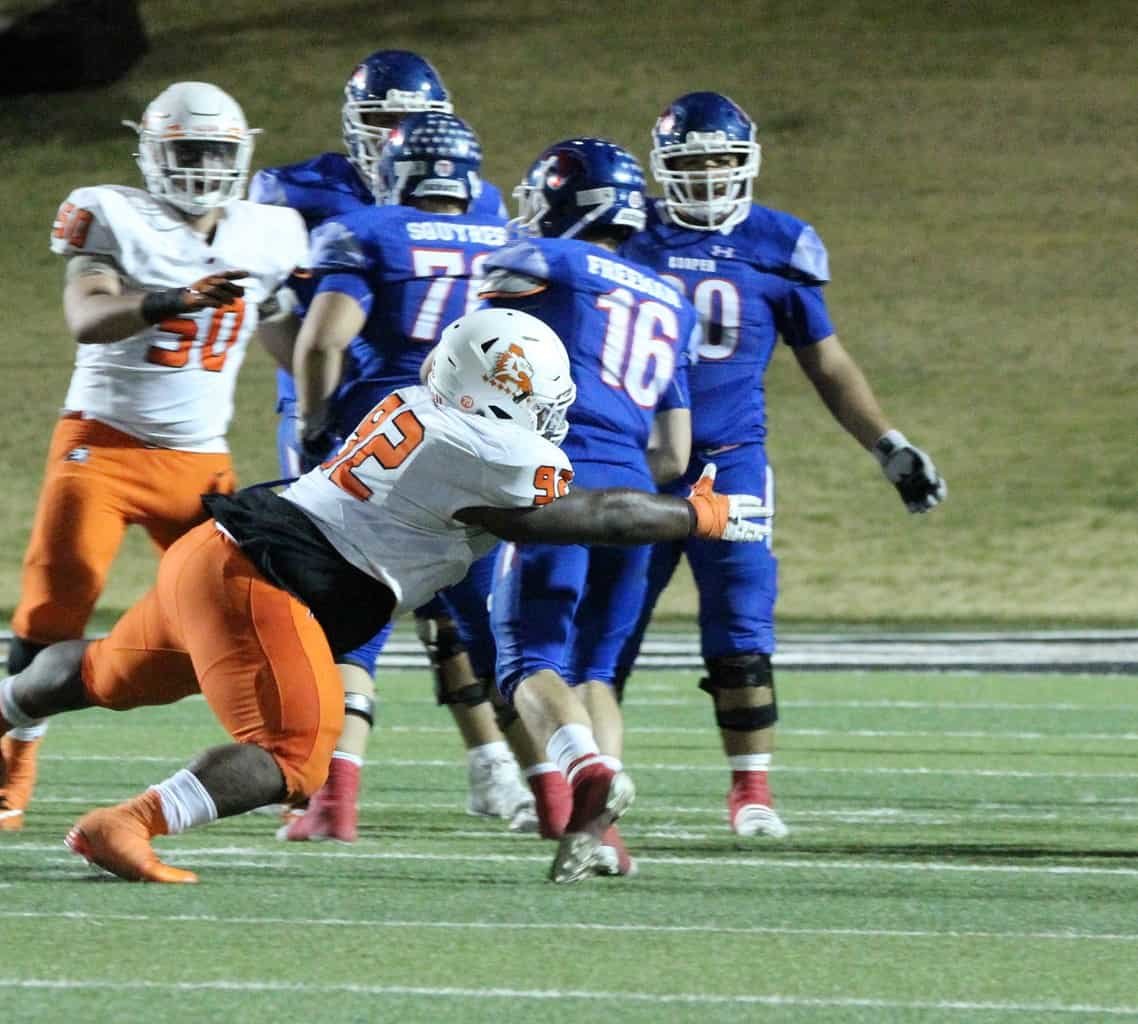 Needing a late stop to put the game away, Aledo defensive back Gio Torres came up with a timely interception with just more than a minute left to play as the state-ranked No. 1 Bearcats survived a scare with a 34-31 win over the Abilene Cooper Cougars Friday night in a Class 5A regional semifinal game at historic Shotwell Stadium in Abilene.

Trailing 34-31, Cooper forced Aledo out on downs and took over with 2:46 remaining in the game at their own 32. Quarterback Ender Freeman converted a fourth and 15 from his own 27 to keep the drive alive. Two more completed passes gained 17 yards as Cooper was in business at the AHS 29 with a minute and a half left to play.

With the large and loud home crowd sensing an upset, Freeman sent a pass toward the right side, but Torres stepped in front of the pass and snared the interception to keep the Bearcats’ season alive.

The Bearcats (13-0) will advance to the regional finals and play the winner of Saturday’s Richland/El Paso Parkland game.

It was the first time all season Aledo did not lead at the half.

Trailing 17-14 to begin the third quarter, it did not take long for the Bearcats to regain the lead. On the first play of the second half, quarterback Jake Bishop faked a hand off to running back Jase McClellan, and with the Cooper defense leaning toward McClellan, Bishop found running room and sprinted down the left sideline for 70 yards and a touchdown.

An interception by AHS linebacker Wyatt Harris set up another Aledo touchdown.

McClellan finished the 63-yard drive by taking a handoff from quarterback Jake Bishop on a draw play and racing 55 yards to the end zone. Daniels added the PAT to extend the Bearcats’ lead to 27-17.

Cooper came back with an electric score as Freeman threw a deep pass to running back Tyrees Whifield, who zigged and zagged through the Aledo defense on his way to an 83-yard touchdown. Michael Rangel booted the extra point, and with time expired in the third period the Bearcats led 27-24.

Aledo came right back with a seven-play, 30-yard drive that was set up by a 60-yard kickoff return by Tre Owens. McClellan carried six times in the drive, with his final tote a six-yard sprint across the goal line with 9:16 left in the game.

After the teams traded turnovers, Freeman went back to work. His 59-yard pass completion to leading receiver Myller Royals brought the ball to the Aledo 1. On the next play, Whitfield crashed over the goal line, and Rangel’s PAT with 7:47 left to play cut the Bearcats’ lead to 34-31.

That set up the final, frantic seconds leading to Torres’ game-saving, season-continuing interception.

To begin the game both teams execute long drives. The difference was, Aledo reached the end zone while Cooper was forced to punt.

The Bearcats took a page from last week’s playbook and scored on an 11-play, 82-yard drive, with all but one play a run. Twice the Bearcats had to convert third downs, the first on a pass from quarterback Bishop to McClellan for 18 yards on third and four, and again on third and two from the Cooper 30 as running back Tre Owens scooted for nine yards and a first down.

Two plays later, McClellan ran off left tackle, broke a pair of tackles and raced to the end zone to complete a 16-yard run. Cole Daniels kicked the extra point, and with 3:50 remaining in the opening period the Bearcats took a 7-0 lead.

Cooper, however, did not flinch. The Cougars matched the score with an 11-play, 75-yard drive ending in a 21-yard touchdown pas from Freeman to receiver Daelin Campos. Michael Rangel booted the extra point to tie the game at 7-7 with 11:03 left in the second quarter.

Aledo looked like it would take the lead back quickly when McClellan raced down the left side for 30 yards, and on the next play he gained 15 before losing a fumble at the Cooper 26-yard line.

Freeman marched the Cougars to the end zone again. He completed a 14-yard pass on third and 13, but later in the series was in a third-and-6 situation from his own 49. Freeman dropped back to pass on third down, and after looking down field did not find a receiver open. However, Whitfield was left alone in the right flat, and the shifty back cut to his right and outraced three defenders to the end zone. For the first time in the 2017 playoffs, the Bearcats trailed.

Rangel added the PAT, and with 7:52 left in the half Cooper enjoyed a 14-7 lead, much to the delight of the home crowd.

The celebration did not last long. Bishop engineered an 11-play, 68-yard drive that ended on a two-yard touchdown run off right tackle by Owens. Nine of the plays on the drive were runs, with McClellan carrying the ball five times and Owens four.

Owens converted the lone third down in the drive, gaining a tough five yards on third and four from the Cougars’ 24. Bishop completed a 27-yard pass to Money Parks early in the possession, and the sophomore connected with Hunter Rosson for three yards on another pass.

Cooper nearly drove the length of the field in the final minutes of the half. Freeman completed an 11-yard pass to start the drive, which was followed by a 15-yard sprint by Whitfield. An AHS personal foul penalty moved the Cougars to the Aledo 19, but the drive stalled, and Rangel kicked a 28-yard field goal with three seconds left in the half and Cooper went into the locker room at halftime with a 17-14 advantage.