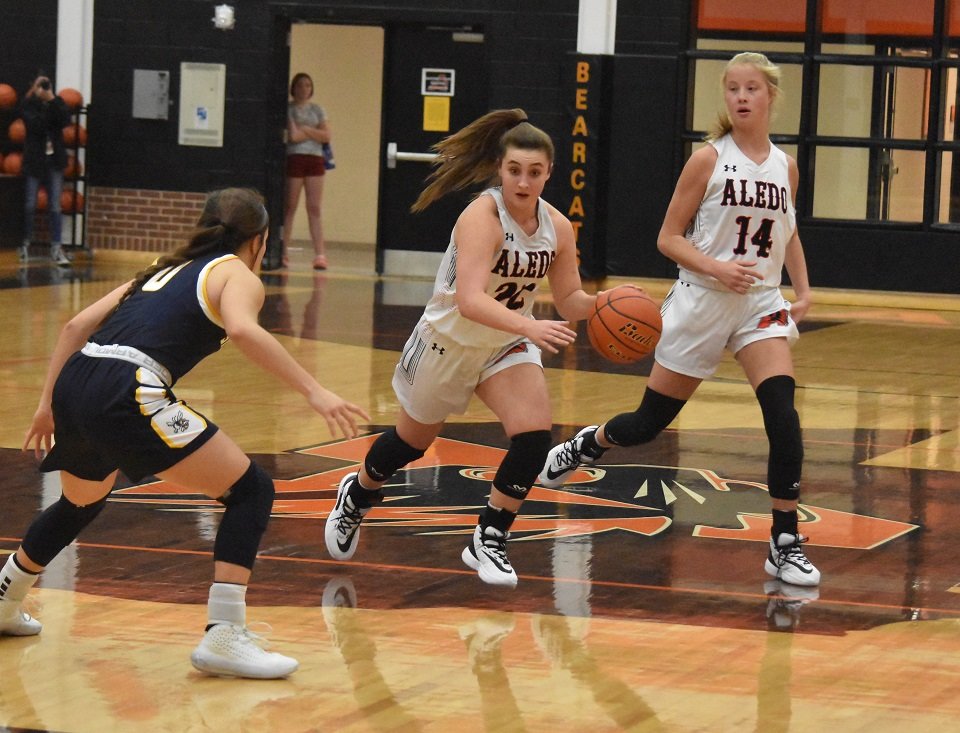 Aledo senior guard Haley Herrin (22) sets up the offense as Abby Morrison (14) gets into position during the Ladycats loss to Stephenville Tuesday night at Aledo. Photo by Tony Eierdam
Posted Tuesday, December 3, 2019 10:44 pm

Stephenville lost a nine-point lead in the fourth quarter but recovered as the Honeybees outlasted the Aledo Ladycats, 35-32, in a girls' non-district basketball game Tuesday night at Aledo.

Also scoring were Raylee McDonald with six points, and Melia Miller and Kalen Atonio, each with two.

The Ladycats, behind five points from Morrison, led 10-9 after the first quarter. However, Stephenville went on an 11-0 run in the second quarter and took a 20-15 lead at the half.

The 'Bees outscored the Ladycats 8-4 in the third period to take a 28-19 lead into the fourth quarter.

But Stephenville held the Ladycats scoreless for the final 2:50 of the game while adding four points to take a three-point win.

The Ladycats swept sub-varsity play as the JV won in overtime, 40-39, while the freshman Ladycats cruised to a 31-23 victory.

Bearcats game at Joshua called off

A power outage in Johnson County that affected the city of Joshua led to a cancelation of the Bearcats game against the Owls.

"The power went off in the middle of the game," Bearcats head coach Jamon Copeland said. "We were told it affected the entire city so the game was called off. We were trailing by five points (in the first half) when the power went out."

For the complete story of the past week in Aledo girls' and boys' basketball see the Dec. 6 issue of The Community News.