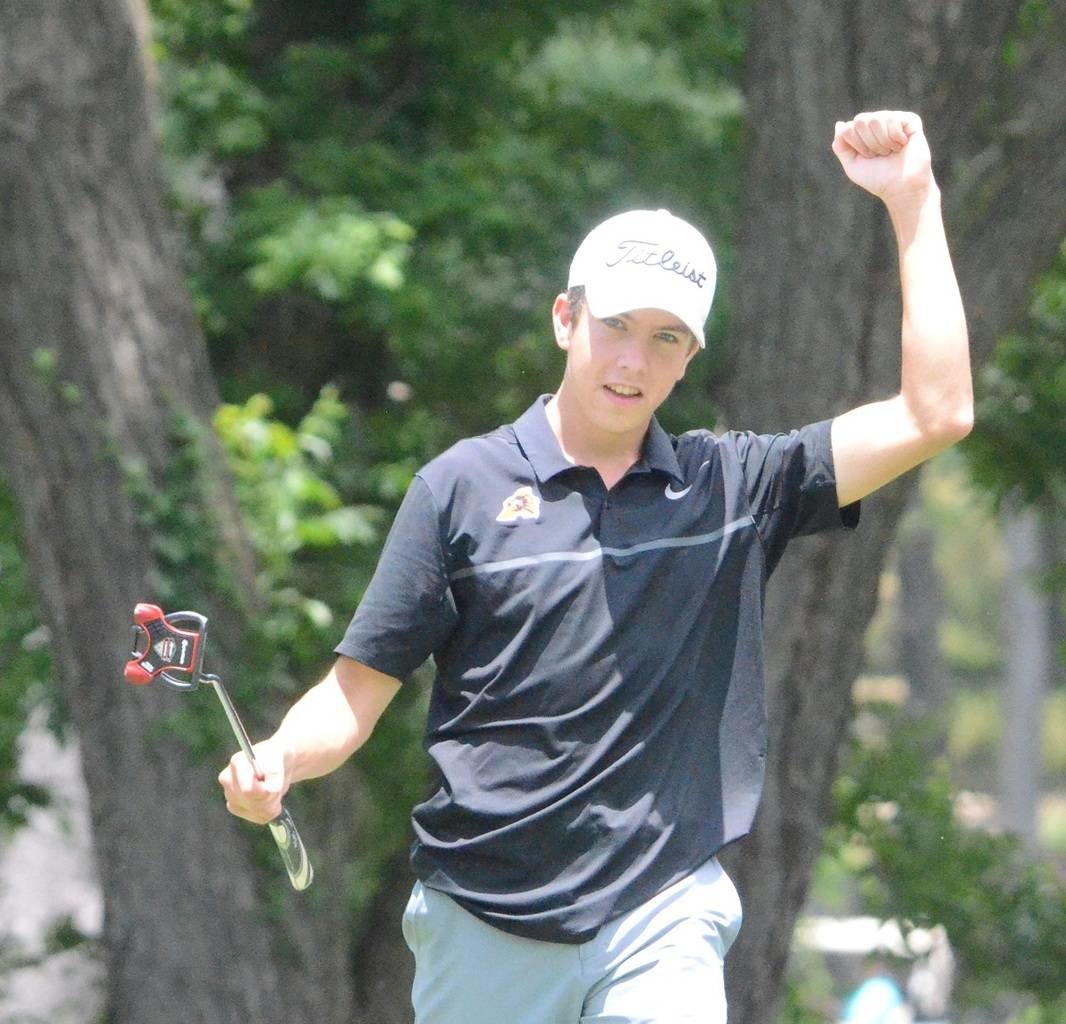 Aledo's Ben Huxtable raises his fist in celebration after sinking a 40-foot birdie putt on No. 15 Tuesday afternoon at the boys' state golf tournament at Wolfdancer Golf Club near Bastrop. The Bearcats finished 10th overall. Photos by Tony Eierdam
Posted Tuesday, May 23, 2017 7:00 pm

Paced by a combined seven birdies from Parker Scaling and Evan Pennington, the Aledo Bearcats crawled out of last place and finished in 10th place today after the final round of the 36-hole boys' Class 5A State Golf Tournament at Wolfdancer Golf Course near Bastrop.

The Bearcats, who shot a 339 in Monday's first round, rebounded to card a total score of 317 for a final two-day total of 656. As expected Highland Park, which held a 10-stroke lead after the opening round, finished with a 36-hole score of 591 after today's round of 297 to win the tournament by 13 strokes over Cedar Park.

Bearcats head coach Jeff Lemons predicted after Monday's round that the Bearcats would improve on the final 18 holes. Four Bearcats improved their scores from Monday, including Pennington, who improved by a whopping 12 strokes thanks to four birdies, including three on his first six holes. He finished with a two-over-par 74 and was three-under-par after the 12th hole.

Scaling improved four shots from his team-leading opening round. He carded three birdies, shot a team-best even-par 72 and finished strong by shooting two-under-par on the back nine.

"Evan got it to three under a couple of times," Lemons said. "It kind of got away from him a little later, but still, he shoots a 74 a day after shooting 86 so that is a 12-shot improvement. He was getting the ball closer to the hole today and wasn't having long putts for birdies. His drives and approach shots were all working together.

"Parker also showed a lot of focus today, got him some birdies and finished even par. I knew this team would come back and play better. Their attitude was good, and last night we went back to the hotel and the guys got to hang out together, swim, ride bikes (the team was staying at the resort hotel at Wolfdancer), and they knew it was the last time they would be hanging out together as a team. I think that helped them today.

"It felt different on the driving) range this morning, and I knew they would have a good day."

Aledo senior Parker Scaling attempts an eagle putt on No. 18 this afternoon during the state tournament at Wolfdancer Golf Club. Scaling missed his eagle bid but tapped in for a birdie that left him with an even-par score of 72 to lead the Bearcats.

Aledo sophomore Evan Pennington watches his drive on No. 16 today at the boys' state golf tournament. Pennington carded four birdies today and finished with a two-over-par 74.

Aledo's Austin Griffith studies the No. 15 green Tuesday during the final round of the boys' Class 5A state golf tournament at Wolfdancer Golf Club near Bastrop.