No.1 Aledo Bearcats tie state record with 50-0 victory over Azle 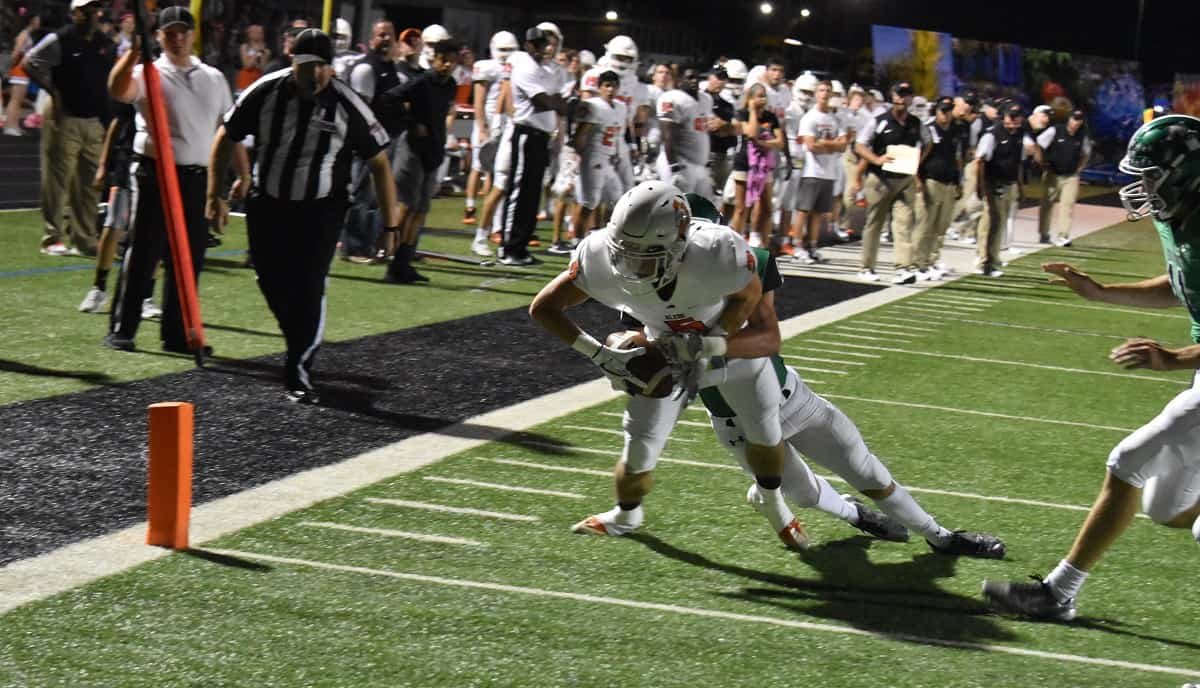 Paced by a smothering defense that did not allow an Azle first down until the fourth quarter, the state-ranked No. 1 Aledo Bearcats shut out the Azle Hornets, 50-0, Friday night in a District 6-5A game at Azle.

The win raises the Bearcats' district mark to 3-0. The Aledo win also ties Austin Westlake's 15-year-old consecutive district wins record at 71. The last time Aledo lost a district game was 2007. Westlake's streak began in 1990 and ended in 2002. The Bearcats can break the record next week at home against Eaton.

"Our defense is talented and they are pretty hungry," Bearcats head coach Steve Wood said. "That is a good combination. We have 11 guys all on the same page, and anytime you can do that you can get pretty good."

"We have a great coaching staff with a lot of continuity, and I feel very fortunate to be a coach at Aledo High School."

The Bearcats led 10-0 after the first quarter and built a 37-0 lead at the half.

Cole Daniels booted the first of his two field goals early in the first quarter from 35 yards out, and later in the period, Tre Owens returned a punt 73 yards for a touchdown. Daniels' extra-point kick increased the visitors' lead to 10-0.

The shifty feet of quarterback Jake Bishop accounted for the next score as the sophomore kept off right tackle, bounced outside and was free for a 44-yard touchdown run down the right sideline. Daniels' kick extended the lead to 17-0.

Bishop used his arm for the next Aledo touchdown, hitting receiver Money Parks on a 24-yard TD pass. With 6:39 left in the first half, Daniels' kick increased the Bearcats' lead to 24-0.

After another Azle punt - the Hornets would punt on their first 10 possessions - senior running back Jake Norwood closed a drive on a one-yard blast up the middle. Daniels added the extra point for a 31-0 advantage.

Aledo closed the first-half scoring when Bishop found receiver Hunter Rosson for a seven-yard TD pass. On the play, Rosson caught the ball at the two and stretched the pigskin over the goal line to complete the score. The PAT was blocked as Aledo led 37-0 at the break.

In the third quarter the Hornets' defense stiffened and forced a pair of Aledo field goals from short range. Daniels booted a 23-yard field goal followed by a 22-yard field goal from Will Turner as the 'Cats took a 43-0 lead into the fourth quarter.

The Bearcats closed the scoring on a six-yard touchdown run by Jason Kerl, with Curtis Renth adding the extra point for a 50-0 lead.

Azle had a chance to get on the board late in the fourth period but missed a 22-yard field goal attempt, leaving the final score at 50-0.

Bishop completed 12 of 16 passes for 143 yards and two touchdowns. He also led Aledo on the ground with 98 yards on eight carries with one TD. Norwood gained 94 yards on 13 carries, and Rosson caught a team-high four passes for 28 yards. Jeffrey "Scooby" Carter had three catches for 29 yards, and Beau Mask caught two passes for 30 yards.

The Bearcats can break the state consecutive district wins record when they continue district play at 7 p.m. Friday, Oct. 20 at Bearcat Stadium against Eaton.