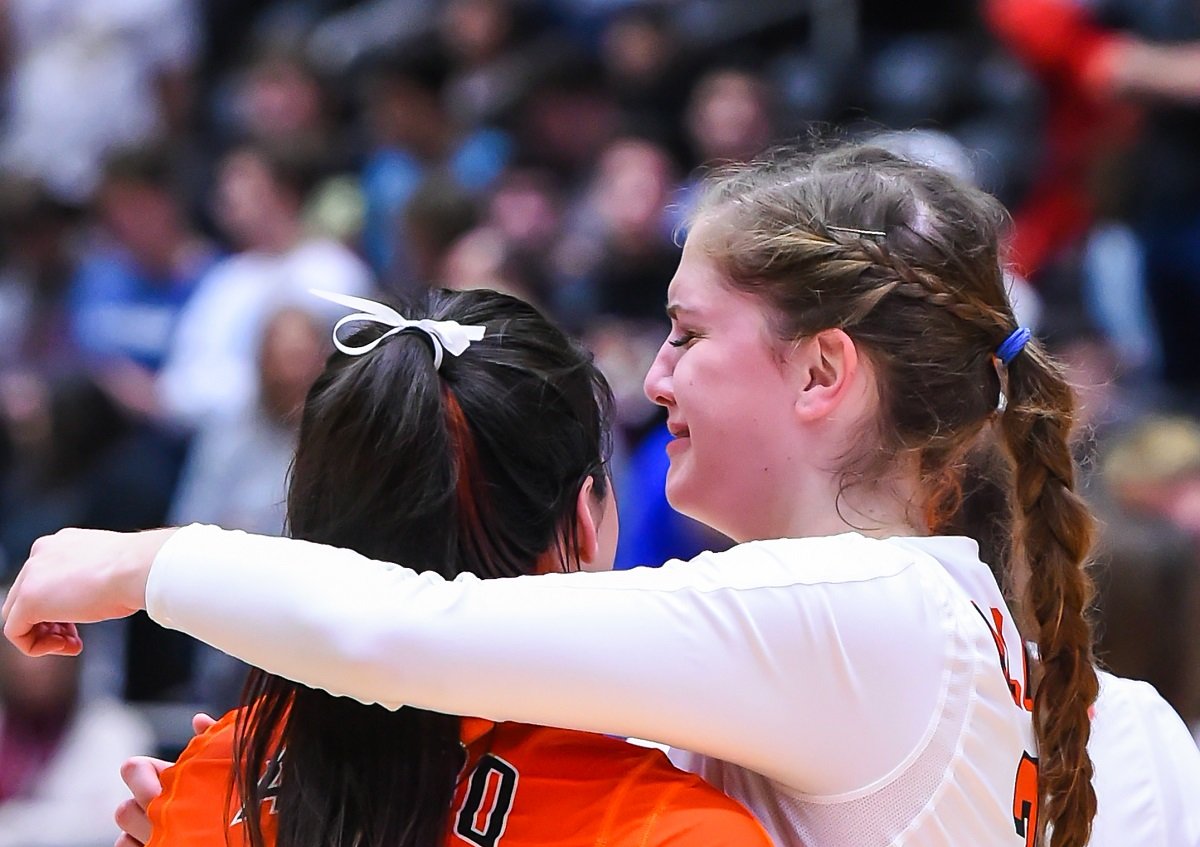 Aledo seniors Allegra Rivas, left, and Sarah Haeussler console each other moments after the Ladycats fell to Leander Rouse in a Class 5A state semifinal match this afternoon in Garland. Photos by Howard Hurd
Posted Friday, November 17, 2017 3:52 pm

A fantastic season that saw the Aledo Ladycats win 37 matches and the Region I championship ended today on the hardwood at Garland ISD's Curtis Culwell Center as top-ranked Leander Rouse defeated the Ladycats, 25-17, 27-25, 25-18, in a Class 5A state semifinal.

The Ladycats finish the season with a 37-14 record. It was also the final high school volleyball match for seniors Sydney Casey, Sarah Haeussler and Allegra Rivas.

"I love this team," Casey said. "This was a true team - we won as a team and we lost today as a team. All of us had each other's backs all season, and we are proud to have made it this far. I can't believe this was my last volleyball match."

Rouse was led by hitter e'lan McCall, who sent down a match-high 12 kills to go along with three blocks. Aledo was led at the net by junior outside hitter Hannah Jones, who recorded nine kills. Outside hitter Evelyn Torres and Haeussler each added eight kills, and defensively, Rivas registered a match-high 22 digs.

"Rouse was strong at the net and that gave us some problems," Ladycats head coach Claire Gay said. "But I am so proud of this team, and it was fun as the season went on to watch them grow as a team. I am going to miss the leadership that Sydney, Sarah and Allegra gave this team, and they have set a good example for our young team which will carry into next year. Again, I am so proud of this team."

The Ladycats took a brief lead in the opening game, 13-11, after a kill each from Haeussler and Alex Grooms. However, No. 1 Rouse went on a 10-1 run to take a 21-14 lead. Aledo cut the lead to 23-17, but a kill from McCall followed by a kill from middle hitter Ava Bell sealed the opener for Rouse.

The Ladycats raced out to a 3-0 lead in game two thanks in part to a pair of kills from Jones. The game was tied eight times, settling at 22-22 after consecutive kills by Jones. The intense set was tied at 23-23, 24-24 and 25-25, but an Aledo return error followed by a kill from McCall sealed the game and gave Rouse a 2-0 lead in games.

Aledo showed great resiliency when coming off an emotional game-two loss began the third game with a 5-1 lead, the fifth point coming on an ace by Casey. But Rouse slowly came back, tying the game, 10-10. Rouse went on a 6-2 run for a 16-12 advantage before Aledo notched the next two points - courtesy of  Rouse service error followed by a kill from Jones - to cut the led to 16-14.

Rouse, thanks in part to a pair of kills and a block by McCall, went on a 7-3 run to extend its lead to 23-17. A kill by McCall brought game three to match point, but Haeussler sent down a kill from the middle to cut the Rouse led to 24-18.

On the ensuing rally, an Aledo service error gave Rouse the point it needed to win game three and the match.

For the complete story see the Nov. 24 edition of The Community News.

Aledo senior Sydney Casey digs a ball during the Ladycats' loss to Leander Rouse in a 5A state semifinal match today at Garland.