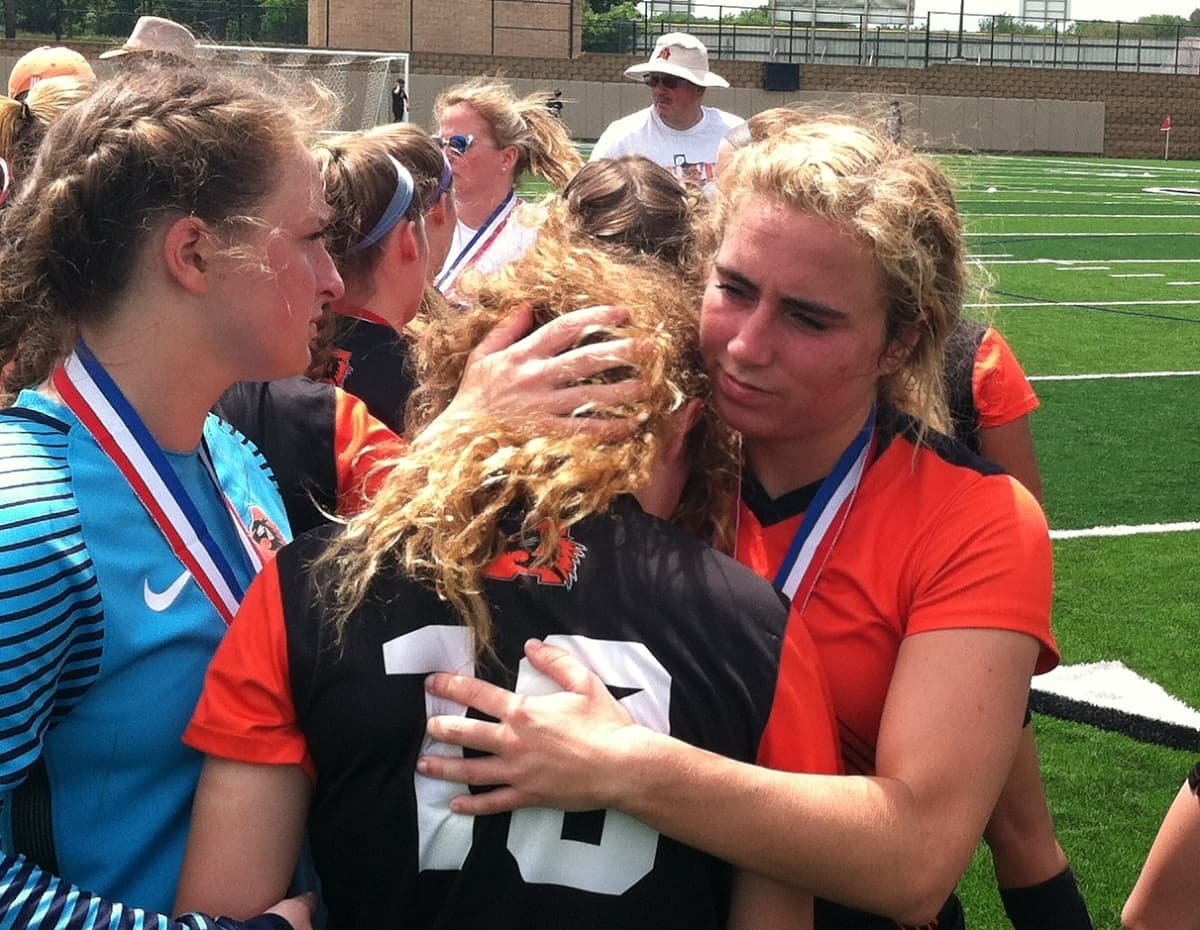 Top-ranked Highland Park justified its wire-to-wire No. 1 ranking after scoring four first-half goals on its way to a 5-3 win over the Aledo Ladycats Saturday afternoon at the girls’ Class 5A state championship soccer match.

“It stinks that we lost, but it does not take away from a great season,” Huddleston said. “The fact that we got this far makes it a good season. Highland Park is good – you saw how they scored quickly after we took the lead – and they played well.

“But we never gave up. They deserve to win state, but we made them work hard for it. Everybody gave 100 percent. (With her injury) I didn’t think I would get to play at all this year, but the fact that I came back three months early from a (torn) ACL and got to play with this great group of girls and my little sister (Cheney) was truly a blessing.

Ladycats head coach Bryan Johnson also remarked that the loss does not take away from a successful and special season. The Ladycats had not gotten further than the regional finals before this year.

“I just told the girls how much I loved them,” Johnson said. “Our girls came out and worked and fought and left everything out on the field. I am so proud of them.”

The match set a girls’ state championship record (all levels) with eight combined goals. It was also the first time all season Highland Park had given up more than two goals in a match.

The Ladycats struck first in a fast-paced, high-scoring first half.

Just a minute and six seconds into the match, Aledo forward Brooke Jones took a shot that was blocked by HP goalkeeper Ginny Hoy, and the rebound came out to forward Eden Wise, who directed the ball into the open net for a 1-0 Ladycats’ lead.

However, the lead did not last long. Exactly two minutes later, Highland Park forward Frances Ann Matise found the back of the net to tie the match, 1-1.

The Lady Scots stayed aggressive offensively, and Aledo goalkeeper Makenzie Covington came up with a diving save to stop a scoring chance. But the ball was not cleared from in front of the net, and HP forward Rachel Wasserman deposited the rebound into the net to give HP a 2-1 lead with 34:23 remaining in the opening half.

Each team followed with good scoring chances, but both goalkeepers were up to the task and stopped the chances.

With 28:53 left in the first half, Covington made another brilliant save, but again, but the ball was not cleared and HP forward Presley Echols hustled to the ball and booted it in for a 3-1 Lady Scots’ advantage.

Highland Park stretched its lead to 4-1 when Sarah O’Neal took a pass from Grace Bass and, from a bad angle three yards in front of the goal line on the right side, pushed a ball across the line just inside the left post with 8:38 remaining in the opening half.

Aledo closed the first-half scoring when Kristen Burns’ shot bounced off Hoy and came to Peyton Laughley, who found the back of the net from inside the box to cut the Lady Scots’ lead to 4-2, where it held until the break.

“Giving up those goals after we got the lead early hurt us,” Johnson said. “I don’t feel that had anything to do with nerves and I don’t think we had any breakdowns. Highland Park is a great team and that’s what great teams do - bury their chances.”

Highland Park, determined to gain a three-goal advantage, put pressure on the Aledo goal in the first 16 minutes of the second half. But Covington came up with two diving saves and stopped another HP effort with a sliding save on a close-range shot.

Aledo also had an excellent chance to cut the lead to a goal, but Sydney Pierce’s blast from in front of the net bounced off the crossbar and the HP defenders cleared the rebound.

Highland Park forward Echols gave the Lady Scots some breathing room when she placed a blast from 15 yards into the upper part of the net for a 5-2 lead with 19:35 left to play.

Not satisfied, Highland Park continued to put pressure on in its offensive end. But Covington came up with a jump save and then stopped a breakaway with just under 16 minutes left to play.

The Ladycats got back into the match four minutes later when Huddleston took upon herself to find the back of the net. She stole a pass at mid field, hustled down the right side, and with three defenders on her while on the run blasted a shot past Hoy from 25 yards to cut the HP lead to 5-3.

Highland Park controlled play for the next 10 minutes to try and salt the match. But with 1:45 remaining, Huddleston was awarded a free kick from 39 yards. But her low blast just missed the right post and sailed out of bounds.

Highland Park dribbled out the clock to seal the win and its sixth state championship.

Echols was named the championship match Most Valuable Player.

Aledo senior Peyton Laughley moves the ball up field during the first half of the Ladycats' 5-3 loss to Highland Park in the girls' 5A state title match Saturday afternoon at Georgetown. Also shown are Brooke Jones (4) and Kristen Burns (13).