No. 1 Bearcats run past Richland, 43-7; will face Mansfield Legacy in state semifinals 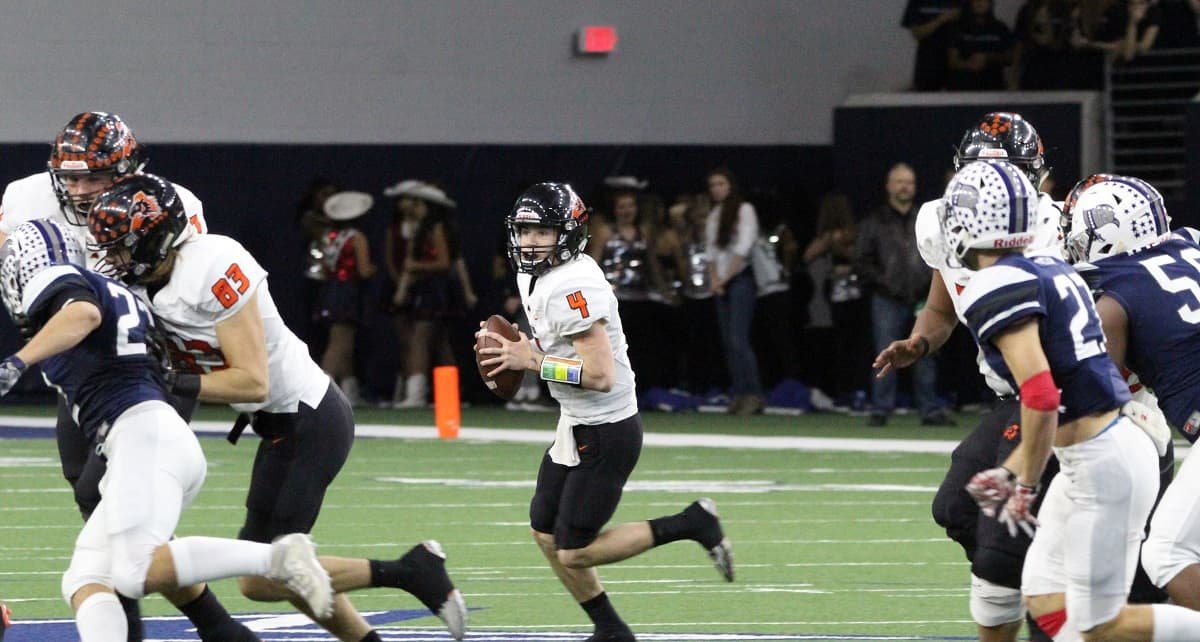 Under excellent pass protection, Aledo quarterback Jake Bishop (4) looks down field during the Bearcats' 43-7 victory over Richland in a 5A Division II state quarterfinal game Saturday at The Star in Frisco. Photos by Karen Towery
Posted Saturday, December 9, 2017 5:13 pm

No. 1 Aledo took a 20-point halftime lead and never looked back as the Bearcats trounced the Richland Rebels, 43-7, Saturday afternoon in a state quarterfinal game at The Star in Frisco.

The win advances the Bearcats to the state semifinals for the fifth consecutive year. Aledo will face Mansfield Legacy at 2 p.m. Saturday, Dec. 16 at Pennington Field.

“They got some talent over there at Richland, and I thought our kids came ready to play, and play physical,” Bearcats head coach Steve Wood said. “We ran the football well even though they stacked the line with eight guys. We will continue to run the ball unless some team won’t let us.

“I was proud of the backs and the O-line for the way we ran the football. I love our offensive line, and I trust them. They are battlers who like to get in there and mix it up.”

Wood said after Richland scored its lone touchdown – on its first drive of the game - that adjustments were made. Apparently, the adjustments worked. After the 75-yard drive Richland gained just 36 total yards for the final three-and-a-half quarters.

“Richland ran some new plays that we had not seen (on its TD drive),” Wood said. “But we made some adjustments and got it done. It feels great to play another week, and I want our kids to be able to enjoy this. Everybody doesn’t get to do this, and we are very lucky and proud of reaching the state semifinals.”

Richland got on the board first. The Rebels ended a seven-play, 75-yard drive with a touchdown pass of 30 yards from quarterback Drew Trent to receiver Kenneth Reeves. Connor O’Neal booted the extra point as the Rebels led 7-0.

The Bearcats tied the game on their second possession of the contest, and it took only one play. Sophomore running back Jase McClellan found a seam off right tackle, cut to the sidelines and was gone, completing a 69-yard touchdown run. Cole Daniels booted the extra point, and with 5:48 left in the opening period the score was tied, 7-7.

In the second quarter, the Bearcats took a 14-7 lead when quarterback Jake Bishop faked a hand off to Tre Owens and lofted a pass of 15 yards and a touchdown to a wide-open McClellan. Daniels added the PAT at the 7:15 mark.

A fumble recovery by Wyatt Harris on the Richland 27 set up the next Aledo TD, which was another one-play drive. On first down, Bishop fired down the middle for receiver Beau Mask, who beat single coverage and cradled the pass on the run to complete a 31-yard touchdown play.

Daniels added the PAT to increase the Aledo lead to 21-7.

Another Richland turnover – an interception by linebacker Aaron Hale - set up the Bearcats’ fourth TD of the half. After a 10-yard pass from Bishop to receiver Hunter Rosson brought the ball to the Rebels’ 28, McClellan rushed for gains of 11 and six yards to bring the ball to the Richland 1.

On the next play, McClellan did the honors with a one-yard run off right tackle, and with 2:30 remaining in the half Aledo stretched its lead to 27-7. The PAT failed.

Aledo defensive end Colt Ellison snuffed out the final Richland drive of the half with his second sack of the contest as the Bearcats enjoyed a 27-7 halftime advantage.

McClellan rushed 12 times in the first half and gained 160 yards, scoring two TDs. He added two catches for 19 yards and a score. Aledo gained 177 yards on the ground in the opening half and racked up 237 total yards.

Richland gained one yard on the ground in the first 24 minutes and had 76 total yards, with 75 coming on its first drive.

The Bearcats began the second half with a 15-play drive – all runs - that took 8:06 off the clock, but on fourth and goal from the Richland 1 the Rebels stop McClellan for a gain of no yards and took possession at its 1-yard line.

But on the next play, running back Rylee Johnson was tackled in the end zone by Aledo defensive tackle James ‘Big Game” Williams for a safety, and with 3:31 left in the third quarter the Bearcats extended their lead to 29-7.

The Bearcats closed the scoring with a pair of TDs in the fourth quarter.

The first came after Owens returned a punt 45 yards to the RHS 10, and the Rebels were also called for an illegal formation, which moved the ball to the 5-yard line.

On first down, McClellan darted untouched up the middle and into the end zone. Daniels’ kick increased the lead to 36-7.

The second TD of the final stanza was a 12-yard flare pass from Bishop to Owens to complete a four-play drive. An interception and return of 40 yards by last week’s defensive hero Gio Torres set up the scoring drive.

Aledo finished with 345 total yards, including 248 on the ground. McClellan rushed 27 times for a game-high 208 yards. Bishop completed four of nine passes for 72 yards and three touchdowns.

Aledo junior defensive end Colt Ellison (44) records one of his two sacks Saturday during the Bearcats' 43-7 win over Richland.