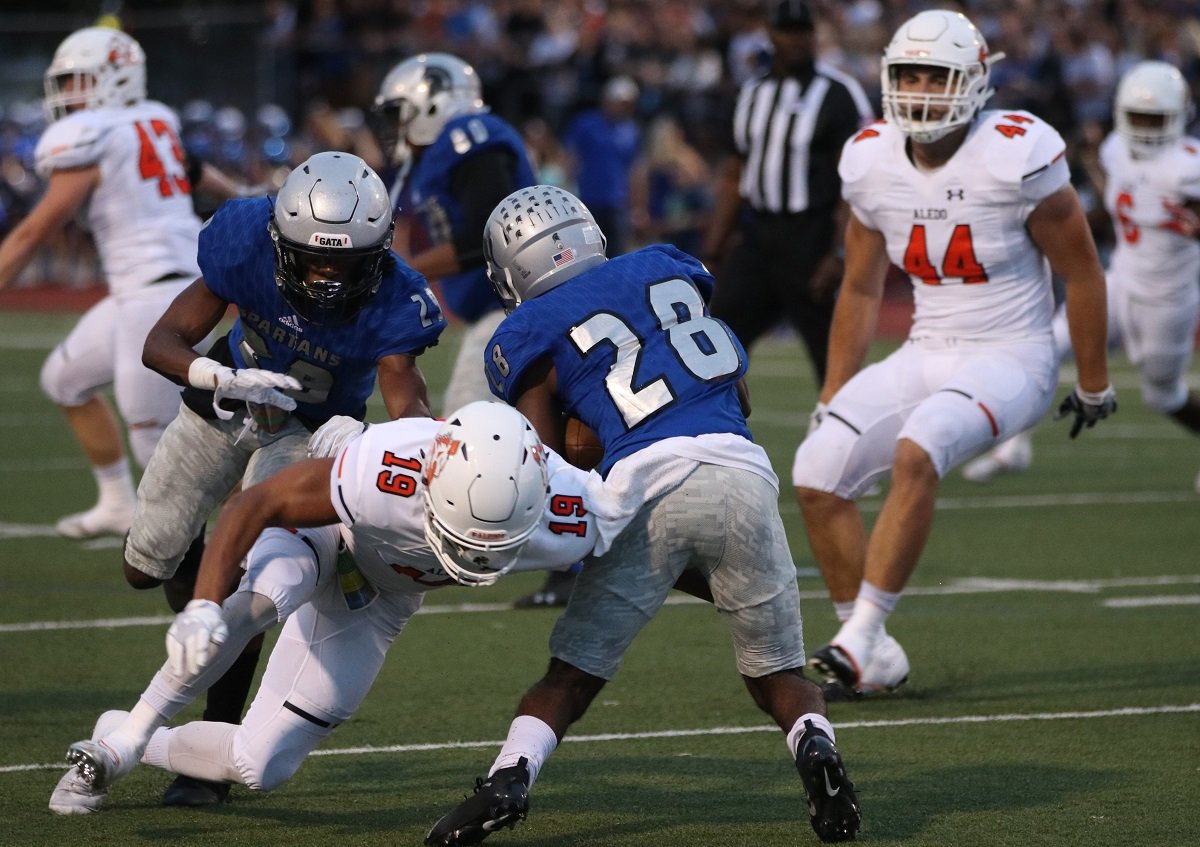 The Bearcats found the end zone on their first possession of the game. Quarterback Jake Bishop began the drive with scrambles of 8 and 7 years, respectively, then completed a pair of passes – the first to Jase McClellan for 16 yards and a one-yard toss to Jo Jo Earle.

After Bishop completed a 12-yard pass to Earle to move the chains, McClellan carried the next two times, the second for eight yards off left tackle for a touchdown. Harper Smith booted the extra point as the Bearcats led 7-0 with 7:25 left in the first quarter.

A fumble recovery by Aledo linebacker Collin Johnson set up the next Aledo score. On first down from the Spartans’ 34, McClellan took a handoff off left tackle, cut to the middle, and then quickly cut back to the left, outrunning five defenders to the end zone to complete a 34-yard touchdown run.

Smith added the PAT for a 14-0 lead with 6:24 remaining in the opening period.

The Bearcat Black Shirts were responsible for the next points. On a play that began at the Spartans’ 14, AHS safety Jake Ford – after an errant Centennial pitch – alertly fell on the ball in the end zone. Smith added the extra point, and with 4:50 left in the first quarter Aledo led 21-0.

Centennial got on the board on its next possession when running back Chris Mosley took a pitch and raced 70 yards to the end zone. Ben Harwell kicked the extra point to cut the Bearcats’ led to 21-7 with 4:05 remaining in the opening quarter.

It took only one play for Aledo to get the touchdown back. On first down from the AHS 49, receiver Earle took a pitch and raced off right tackle, swiftly cut to the middle and stretched the defense with another cut toward the left sideline and was gone for a 51-yard touchdown. Smith’s PAT extended the lead to 28-7 with 3:50 left in the first quarter.

Centennial followed with the longest drive of the game to this point, using 13 plays – including five first downs – before stalling at the Aledo 19. Harwell salvaged the drive with a 37-yard field goal, and with 10:33 left in the second quarter the Spartans cut the Bearcats’ lead to 28-10.

Another fumble recovery by Johnson set up another Aledo touchdown.

From the hosts’ 21, Bishop kept for 18 yards, and two plays later, McClellan crashed over the goal line off left tackle for a four-yard TD, and Smith’s PAT with 7:16 left in the half increased the AHS advantage to 35-10.

The Spartans, however, did not flinch, and came back with a four-play, 55-yard drive capped by a two-yard touchdown off a keeper from quarterback Kyle Burns with 5:24 remaining in the half to cut the Aledo lead to  35-16. The PAT attempt was blocked.

The Bearcats began their next drive from the Centennial 43 after a 35-yard kickoff return by Tre Owens. After Earle gained 28 yards on first down, McClellan carried the ball on the next three plays, scoring on his last carry from four yards out while carrying five or six Spartans on his back across the goal line.

Aledo closed the first-half scoring with a six-play, 73-yard drive that ended with a one-yard TD run by McClellan, who was untouched on his carry up the middle. Bishop completed two passes to receiver Hampton Fay on the drive – of 9 and 26 yards – the second which brought the ballot the CHS 1.

McClellan scored his sixth TD on the Bearcats first drive of the second half. After the Bearcats forced a Centennial punt, McClellan took a hand off and raced 35 yards down the right sideline and to the end zone. McClellan outraced five Spartan defenders after he turned the corner, scoring just inside the right pylon.

Smith added the PAT as Aledo extended its lead to 56-16 with 5:13 remaining in the third quarter.

The Bearcats closed the scoring on a nine-yard TD run by Avery Jackson, with Micco Little booting the extra point to increase the lead to 63-16. Jackson rushed four times in the drive for 34 yards.

McClellan finished with 134 yards on 14 carries, and Earle caught four passes for 54 yards, and rushed five times for 92 yards. Bishop completed seven of 13 passes for 105 yards.

The Bearcats are off next week and will continue District 5-5A play at home against Everman on Sept. 28.