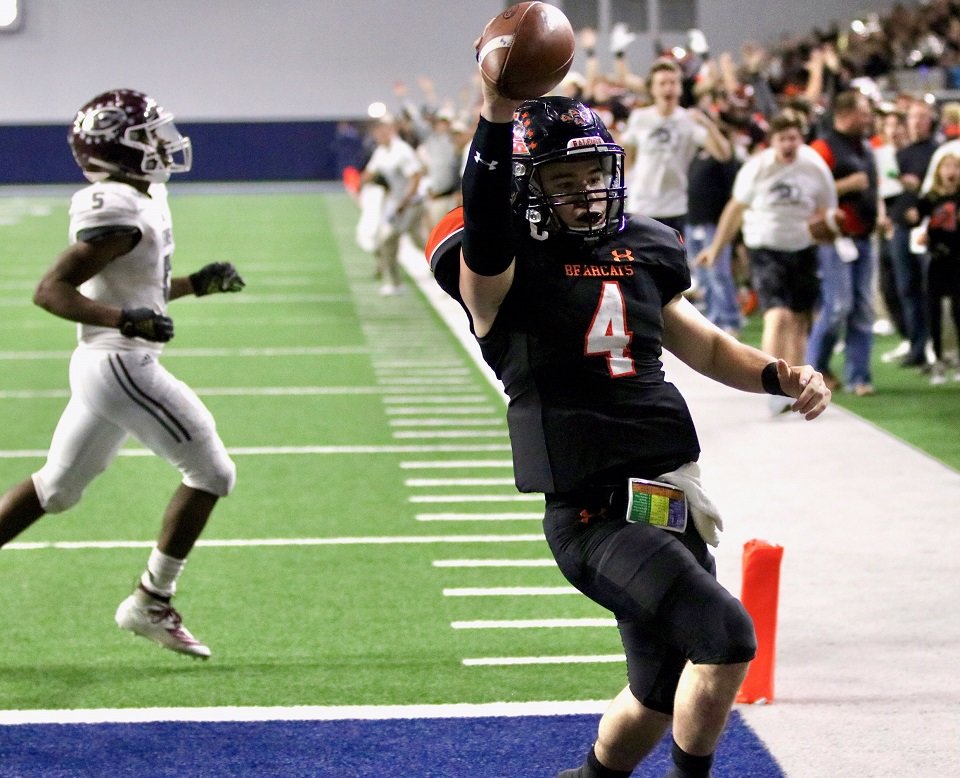 Aledo senior quarterback Jake Bishop scores on a 17-yard run for what would turn out to be the game-winning points during the Bearcats’ 43-36 overtime victory over Ennis Friday night in the Class 5A, Division II, Region II final at The Star in Frisco. Photo by Cynthia Llewellyn
Posted Friday, December 6, 2019 11:12 pm

No. 1 Aledo held off a scrappy and determined Ennis squad as the Bearcats defeated the Lions in overtime, 43-36, Friday night in the Class 5A, Division II, Region II final at The Star in Frisco.

The Aledo win – its 13th consecutive victory - advances the Bearcats (13-1) to the 5A state semifinals where they will face Lubbock Cooper at 3 p.m. Saturday, Dec. 14, at Abilene Christian University.

“Our kids were determined to win this game; they never quit and kept working hard,” Bearcats head coach Tim Buchanan said. “I just can’t say enough about how hard they played at the end.”

With the game tied 36-36, Ennis won the overtime coin flip and elected to begin on defense. But after three plays the Bearcats were faced with fourth and two from the Ennis 17. Going with their big horse, the Bearcats called all-state tailback Jase McClellan’s number, and the senior took a handoff and gained five yards for a crucial first down.

After an illegal procedure penalty pushed the ball to the 17, senior quarterback Jake Bishop took the snap, rolled to his right looking for an open receiver, but quickly pulled the ball down and reversed field as he sprinted 17 yards past several Lions’ defenders down the left side and into the end zone.

“It was a bootleg (pass) we called, but I didn’t like what I saw when I rolled out to my right,” Bishop said. “So I reversed field (to his left) and saw a little seam and I just kicked it in gear."

Little added the PAT to give the Bearcats a 43-36 lead.

On Ennis’ possession, the Lions were faced with a fourth and eight from the Aledo 13. Ennis quarterback Collin Drake fired a pass over the middle and appeared to have a receiver open in the end zone. But Jo Jo Earle – a starting receiver who was inserted at cornerback due to injuries – extended to break up the pass on a diving play to give the Bearcats the victory.

“Ennis is a great football team," Bishop said, "and they gave us a fight.”

The Bearcats got on the board first on a 2-yard touchdown run by McClellan. McClellan carried seven times for 33 yards on the 10-play, 95-yard drive. The extra-point kick was blocked, and with 5:58 remaining in the opening period, Aledo led 6-0.

The Bearcats squibbed the ensuing kickoff and recovered the ball at the Ennis 41. Seven plays later, McClellan blasted over the goal line off right tackle for a 12-0 lead. The conversion pass failed.

On its next possession, Ennis got on the board on an 11-yard touchdown pass from Drake to receiver Laylon Spencer with a little more than 10 minutes left in the second quarter. Angel Aguilar booted the extra point to cut the Bearcats’ lead to 12-7.

Aledo answered the Lions’ score on its following possession. McClellan was the workhorse on the drive, carrying six times for 33 yards, his final carry a three-yard blast off left tackle to complete a nine-play, 57-yard drive.

Micco Little booted the extra point to extend the lead to 19-7 with 7:07 remaining in the first half.

After the Bearcats forced Ennis out on downs, Bishop drove the ‘Cats to the Ennis 26 on four plays but lost a fumble on the next play that was returned 72 yards for a touchdown by Devon Beasley. Aguilar added the PAT, and with 2:33 left in the opening half, the Lions cut the Bearcats’ lead to 19-14.

With little time remaining, Bishop completed three consecutive passes for 38 yards – two to McClellan – before scrambling for 15 yards to the Lions’ 13. On the next play – with 13 seconds remaining – Bishop fired a pass in the end zone on the left side to Parks, who made a sliding touchdown catch with seven seconds left in the half.

Little added the PAT to increase the Aledo advantage to 26-14, where it remained at the half.

The Bearcats gained 300 total yards in the first half, including 159 on the ground. McClellan carried 18 times for 107 yards and three touchdowns, and Bishop completed 12 of 14 passes for 141 yards. Earle led Aledo receivers with five catches for 75 yards.

To begin the third quarter, a lost Aledo fumble led to the next Ennis score. The Lions finished a six-play drive - that included a 46-yard pass reception of a deflection - with a 12-yard TD pass from Drake to Spencer. Aguilar added the PAT to cut the Bearcats’ lead to 26-21 with 2:57 left in the third quarter.

The Bearcats came back with a nine-play, 50-yard drive that stalled at the Ennis 5. But Little booted a 21-yard field goal to increase the Aledo lead to 29-21 with 10:43 remaining in the game.

On their ensuing possession, the Bearcats, on the strength of a determined Bishop, moved the ball 81 yards on 11 plays down to the Ennis four-yard line. Bishop converted two first downs on quarterback keepers to keep the drive alive on runs of 13 and 15 yards, respectively.

On the next play, Bishop called his own number and scooted across the goal line from four yards with 4:55 left in the fourth quarter. Little’s PAT gave the Bearcats a 36-29 lead.

Scrappy Ennis, however, refused to give in, and Drake fired an 11-yard TD pass to Simmons on a fade route with 1:05 left in the fourth. Aguilar’s PAT knotted the score, 36-36, as the game went into overtime.