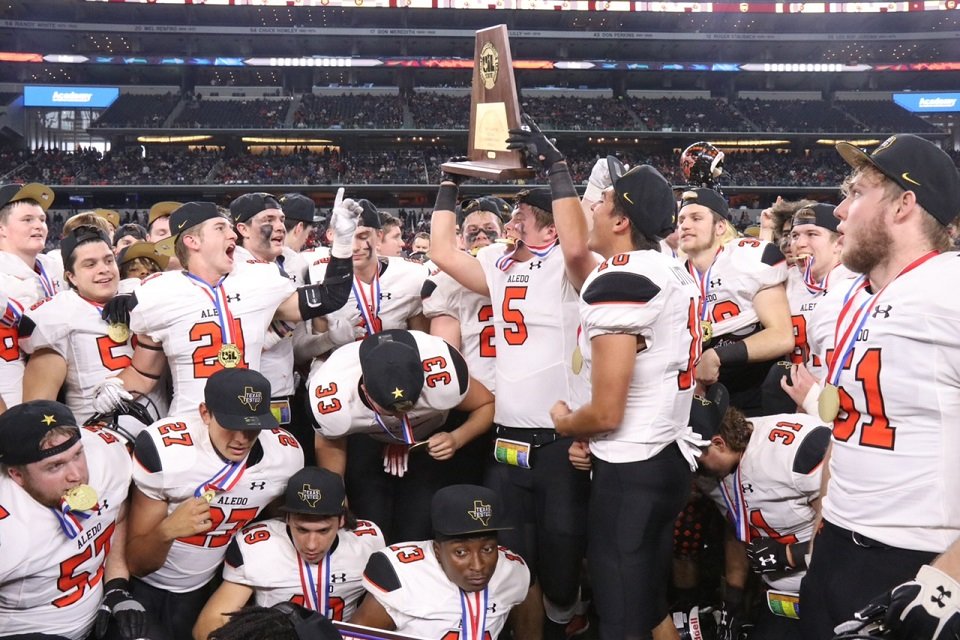 No. 1 Aledo held off a late, furious No. 4 Fort Bend Marshall comeback bid as the Bearcats outlasted the Buffalos, 45-42, Saturday afternoon to win the Class 5A, Division II state championship at AT&T Stadium in Arlington.

The title was the ninth state football championship for Aledo, a Texas 11-man state record.

Aledo head coach Tim Buchanan has had a hand in all nine titles as either a head coach or athletic director.

Buchanan left the sidelines in 2014 to become fulltime AD, and this season was his first back on the Bearcats’ sidelines as top field boss.

“It hasn’t sunk in yet,” Buchanan said. “I haven’t processed it yet. This is a great group that has won several state championships; they are really good kids, hard workers and really good football players.

“For this group to win the ninth state football championship for this school is special. Again, they worked their tails off.”

Senior quarterback Jake Bishop was named the game’s Most Valuable Player on offense, while senior cornerback Demarco Roberts was selected as the MVP on defense.

It was also the eighth state championship won by Aledo in the last 11 years.

“Jake was in kindergarten when Matt’s team (2009) won that started this streak,” Buchanan said. “For him to grow up and watch it all and now win twice himself is very special.”

“This was the best one yet,” he said. “I love playing with my guys and this was a great way for us to finish together.”

The Bearcats received the opening kickoff and marched to the end zone on a methodical drive.

McClellan carried five times in the drive for 32 yards, and Bishop connected with receiver Money Parks for a 28-yard touchdown pass where Parks caught the ball at the MHS 20 and outran two defenders to the end zone.

With 8:37 left in the first quarter, Micco Little booted the extra point for a quick 7-0 lead.

After forcing a Marshall punt, Aledo marched to its second touchdown in as many possessions.

The Bearcats drove 92 yards on eight plays, finding the end zone on another long pass, this time from Bishop to speedy Jo Jo Earle, who was left all alone down the right side for an easy 40-yard touchdown reception with 3:53 remaining in the opening stanza.

Little added the PAT as the Bearcats enjoyed a 14-0 advantage.

Marshall got on the board on its next possession, using a 53-yard pass from quarterback Malik Hornsby to running back Devon Achane to bring the ball to the Aledo 17.

Two plays later, Hornsby called his own number and scored on a 10-yard quarterback draw play up the middle with 1:43 left in the first quarter. Id M’Mongelwa booted the extra point to cut the Bearcats’ lead to 14-7.

The Buffalos’ defense finally came up with a stop the next time Aledo touched the ball, and it led to Marshall’s second score.

Achane got the ball in Aledo territory with a 44-yard run to the AHS 19, and the drive ended on a 10-yard touchdown run on an end around by receiver Brandon Tryon with 9:26 remaining in the second quarter.

The PAT attempt, however, sailed wide as Aledo held a 14-13 lead.

The Bearcats came back and answered with a 10-play, 88-yard drive. Bishop’s arm carried the drive, as he connected on a 31-yard pass to Earle and closed the drive with a 34-yard TD pass to Parks. On the play, Parks beat his single defender and caught the ball at the 10 before waltzing into the end zone.

The back-and-forth nature of the game continued as Marshall drove the ball 67 yards on 11 plays, the final play a one-yard quarterback sneak by Hornsby with 1:30 left in the half.

The PAT kick by M’Mongelwa was true to cut the Bearcats’ lead to 21-20.

Bishop rallied the Bearcats for a quick score before the half ended. He completed three passes in the 58-yard drive, the third a 38-yard pass to Parks at the MHS 3.

McClellan carried for two yards on the next play, and the drive was completed two plays later on a QB sneak by Bishop with 6 seconds left in the half. Little’s boot gave Aledo a 28-20 lead, where it remained at the half.

Bishop threw three TD passes and ran for another in the first half as he completed 9 of 13 passes for 203 yards. McClellan rushed 13 times for 58 yards, and Parks led Aledo receivers with five catches for 119 yards and a pair of TDs.

Aledo finished the first half with 300 totals yards to Marshall’s 240.

Although Marshall was stopped on its initial drive of the second half, the Buffalos put the Bearcats in a hole on a 59-yard punt that rolled to a halt at the AHS 1.

But it didn’t matter. Bishop completed a critical third-down pass to Parks to get the ‘Cats out of trouble in the shadow of their own end zone with a 13-yard gain. McClellan ended the drive with a 63-yard sprint to pay dirt, and Little’s PAT increased the lead to 35-20 with 7:56 remaining in the third quarter.

Again, the Bearcats stopped the Buffalos, and then marched to the MHS 3 on six plays. But Bishop was sacked for minus-9 yards on third down and goal, and Aledo settled for a 29-yard field goal by Little to extend the lead to 38-20 with 2:36 left in the third quarter.

Marshall, however, refused to give up and countered with a four-play, 62-yard drive that ended on a 17-yard blast off left tackle by Achane. The PAT kick was good, and with 49 seconds remaining in the third quarter the Buffalos cut the Bearcats’ lead to 38-27.

The Bearcats appeared to have put the game away on its ensuing drive. Bishop, like last week, converted a fourth and three with a 5-yard carry to keep the drive alive, which was ended on a 17-yard TD run by McClellan – thanks to a late block by Parks – with 6:29 left to play. Little’s PAT increased the Aledo lead to 45-27.

While most expected the Buffalos to fold their tent, Marshall instead came back with a furious, six-play drive, reaching the end zone on a 2-yard run by Achane to cut the AHS lead to 45-34 after the PAT.

With 4:15 left to play, Marshall’s onside kick attempt rolled out of bounds, and Aledo tried to run out the clock. But the Bearcats could not convert a fourth and five from the MHS 23, giving the Buffs another opportunity to cut into the lead.

With the ball at the Buffs 26, Hornsby kept his team in the game with a 32-yard run to the AHS 42. He then completed a 34-yard pass to Achane to the AHS 8, and two plays later cut the lead to 45-40 after an eight-yard TD reception by Tryon.

Marshall converted on the 2-point conversion run by Hornsby to cut the Bearcats’ lead to 45-42 with 49 seconds left to play.

Marshall’s last-gap chance came on an onside kick, but Caden Anderson pounced on the ball to clinch the ninth state football championship for Aledo.

For the complete story, and for more comments from Bearcats players and coaches and Aledo ISD administrators, see the Dec. 27 issue of The Community News.