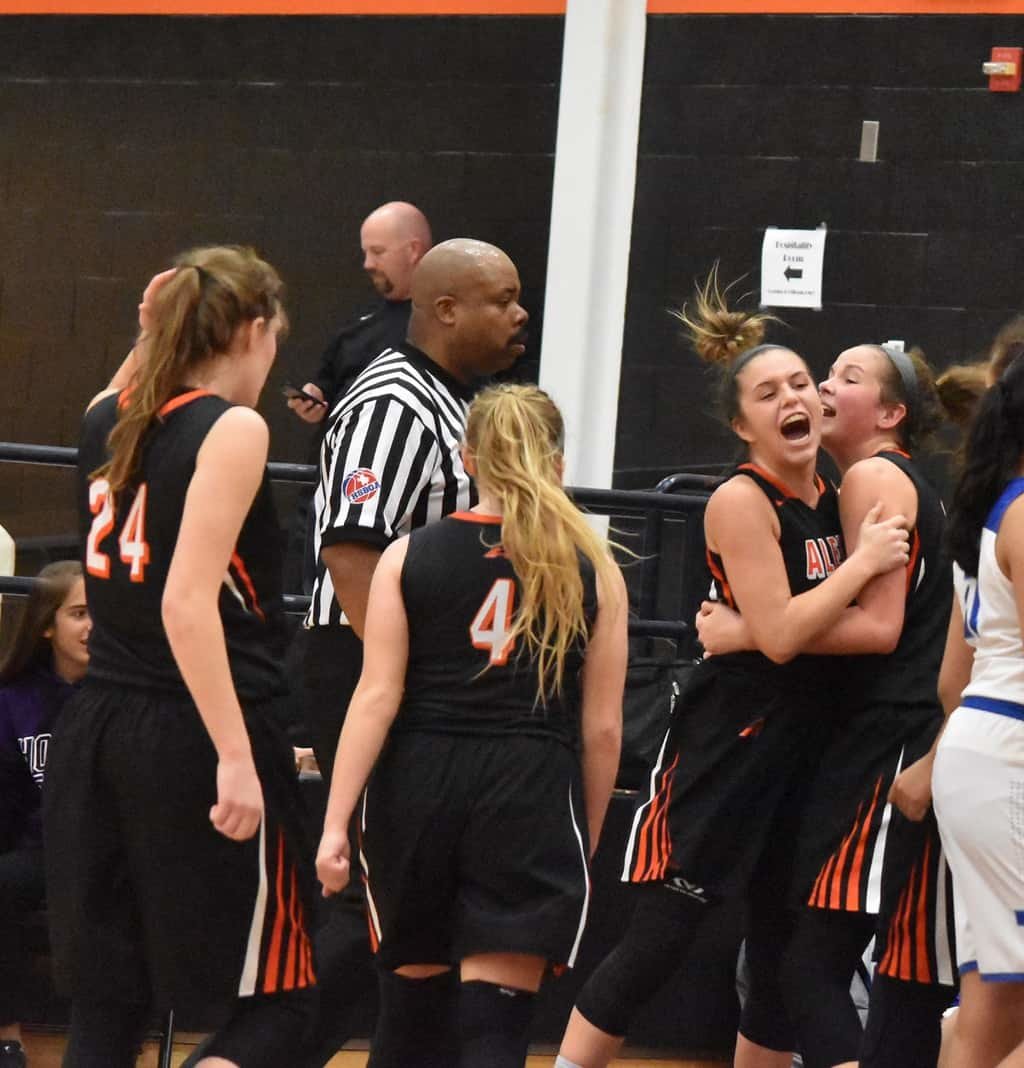 Aledo sophomore guard Taylor Morgan scored on a driving layup with 16 seconds left to play in overtime and the Ladycats' defense forced a turnover with three seconds remaining as AHS got past the Fort Worth Trinity Valley School Trojans, 58-57, this afternoon in the winner's bracket semifinals at the Ladycat Invitational at the AHS gym.

The win raises the Ladycats' record to 15-2. Aledo will advance to the championship game which is set for 2:30 p.m. Friday at the AHS gym.

The Ladycats almost won the game in regulation. But TVS senior guard Madison Williams - who has committed to the University of Oklahoma - drained a three-point bucket with 19 seconds left in the fourth quarter to tie the game and send it to overtime. Williams led all scorers with 38 points.

Williams began the overtime session with a field goal and a free throw to give the Trojans a three-point lead, and after an Aledo turnover, TVS post Madison Briscoe hit a jumper to extend the Trojans' lead to 56-51. Aledo trailed by five points with a minute and a half left in OT, but Morgan drove the lane and was fouled. She canned consecutive free throws to cut the TVS lead to 56-53 with 1:27 left in OT.

On the Trojans next trip down the court, Briscoe was fouled, and she hit one of two charity shots with 46 seconds left to extend the lead to 57-53. Facing a critical possession, Aledo stayed in the game when junior guard Reagan Brown sank a three-pointer from the left baseline to cut the Trojans' lead to 57-56 with 30 seconds left in OT.

The Ladycats got the ball back nine seconds later when Aledo's pressure defense caused a tie ball, and the possession arrow pointed in the Ladycats' direction. Morgan went to work from there, using a brilliant stutter-step move to score on a driving layup down the left side which gave AHS a 58-57 lead. Morgan was fouled on the layup, but TVS came up with a rebound of the charity shot.

However, the Aledo defense smothered TVS again as the Lady Trojans lost the ball out of bounds with three ticks left on the clock. Aledo ran out the last three seconds to seal the victory.

TVS led 15-13 after the first quarter, but Aledo, paced by eight points from Payne and seven from Morgan, scored 22 points in the second quarter while holding the Trojans to 10 to take a 35-25 lead at the half. TVS outscored Aledo 12-10 in the third period to cut the Ladycats' lead to 45-37 after three quarters. TVS went on a 14-6 run in the fourth quarter to force overtime.

Ladycats notes: Friday's championship game represents the final non-district game of the year for Aledo. The Ladycats will open District 6-5A play at  8 p.m. Tuesday at home against Chisholm Trail.

Aledo guard Reagan Brown (24) hit a big three-point basket in overtime to help the Ladycats to a 58-57 victory over Trinity Valley today in the semifinals of the Ladycat Invitational.

Aledo senior post Alaina Touchet (35) runs into a crowd underneath the basket during the Ladycats' win over Trinity Valley. Also shown is sophomore guard Haley Herrin (22).

Aledo senior post Sarah Haeussler (41) puts up a shot from the lane during the Ladycats' win over Trinity Valley. Haeussler secured a game-high seven rebounds.