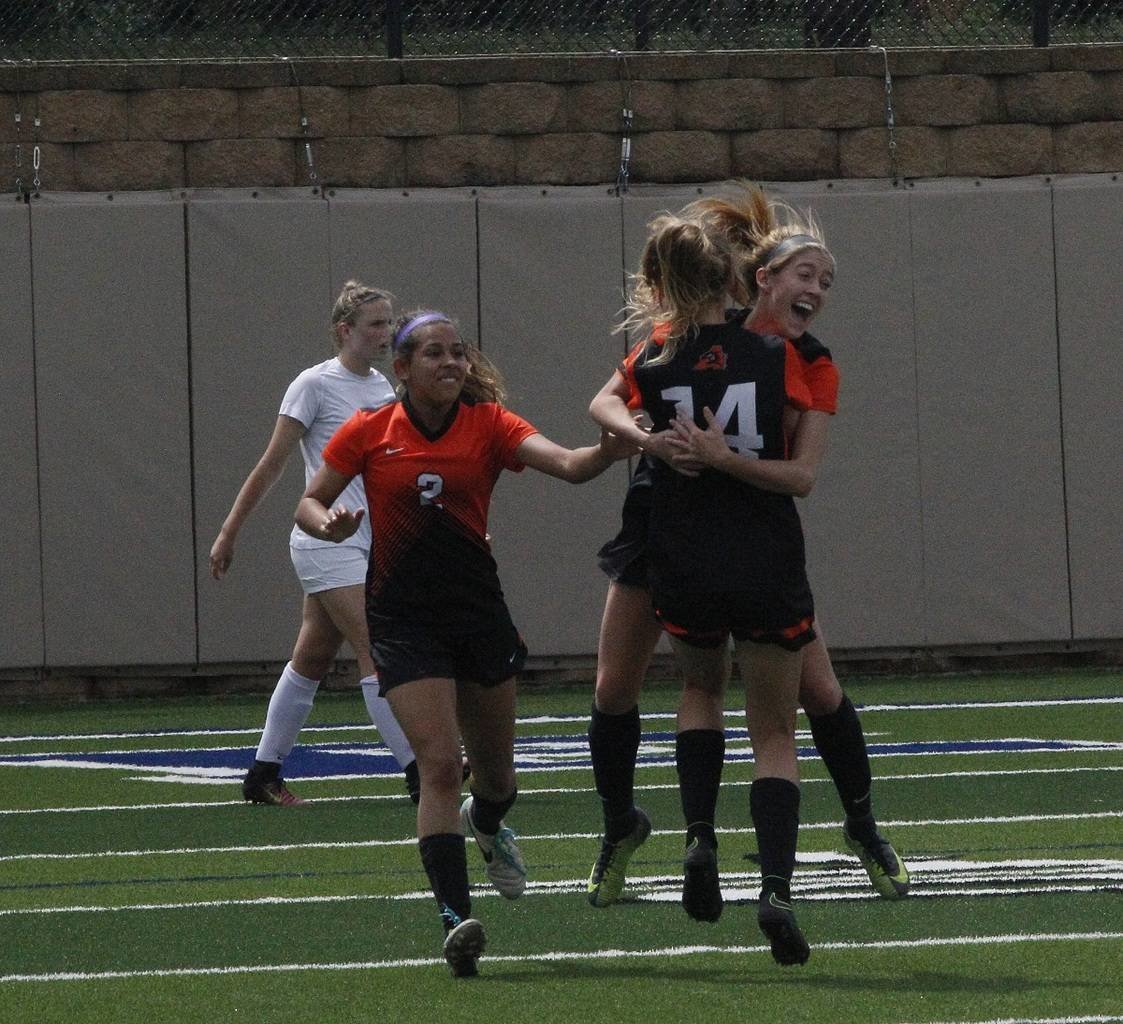 Aledo senior Cameron Huddleston scored with 3:55 left in the second overtime to lift the Ladycats to a 3-2 victory over Leander Rouse Thursday afternoon in a girls’ Class 5A state semifinal soccer match at Birkelbach Field in Georgetown.

The win advances the Ladycats to the Class 5A state championship match against Highland Park, a 2-0 winner over Boerne Champion earlier today.

The match is set for 11 a.m. Saturday at Birkelbach Field in Georgetown.

Huddleston was awarded a free kick from 20 yards on the left side. Her blast eluded Rouse keeper Celise Phillips as the ball flew in the upper middle of the net.

Aledo turned back Rouse for the final 3:55 to seal the win.

Aledo had two good scoring chances in the first overtime, but both shots by Peyton Laughley were near misses as the first sailed to the right of the post and the second sailed over the net.

Each team had two shots on goal in the first 10 minutes before the Ladycats got on the scoreboard first.

With 26:15 left in the opening half, Peyton Laughley stole a pass, hustled down the left side and sent a shot from 15 yards out which landed inside the right post for a goal to give the Ladycats a 1-0 lead.

It did not take long for Rouse to tie the score. With 17:55 left in the first half Rouse was awarded a free kick from 45 yards just to the left of mid field. Rouse senior defender Abby Schraeder sent a high, rising shot toward Aledo goalkeeper Makenzie Covington, who jumped high in an attempt to deflect the ball over the net as she had earlier in the half.

But the ball sailed just over Covington’s hands but under the cross bar for a goal that tied the match, 1-1.

Rouse took a 2-1 lead with 21:10 left in the match when Abby Forster scored from 25 yards on a free kick. The ball just eluded the hands of leaping Covington.

Aledo kept pressure on the Rouse goalkeeper for the last 10 minutes of the match but each time the Ladycats were turned away. The Ladycats also had a pair of corner kick opportunities late in the match, but one rebound sailed over the net and the other was stopped by Phillips.

In the second half of regulation, Aledo tied the match at 2-2 when senior forward Peyton Laughley found a little space from 28 yards away. Her shot from the right side flew high into the upper corner of the net to tie the match with 12:09 left in the second half.

That set the stage for the overtime action.