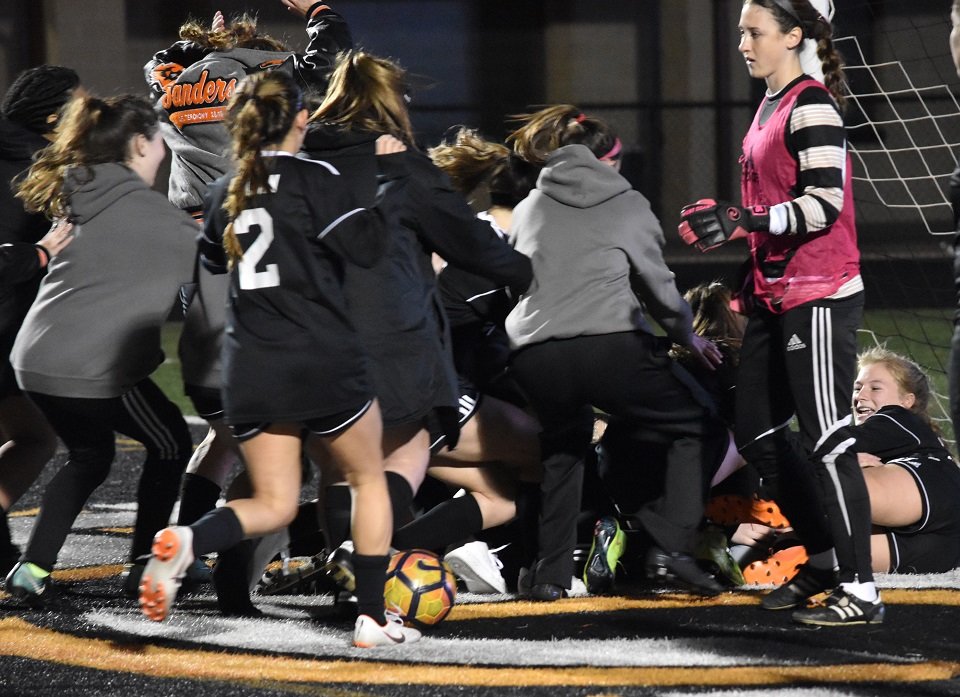 Aledo mobs goalkeeper Emma Davis after she blocked three of five shots in the shootout to give the Ladycats a shootout victory over Wichita Falls Rider Wednesday night at Bearcat Stadium. Photo by Tony Eierdam
Posted Wednesday, February 20, 2019 10:01 pm

In a battle for first place in girls' soccer District 4-5A, Aledo and Wichita Falls Rider slugged it out with a 0-0 tie in regulation before the Ladycats earned the extra point in the shootout, 3-2, to stay on top of the district standings.

Teams are awarded three points for a win and zero points for a loss. But in the case of a regulation tie, each team earns one point and the two teams play a shootout (penalty kicks) to determine which team earns the extra point.

As a result, the Ladycats lead the district with eight points, with Rider in second place with four points.

Each team had three to four good scoring chances in regulation as Aledo goalkeeper Emma Davis made two diving saves and one leaping save to keep the Lady Raiders off the board.

Late in the second half, Rider had an excellent chance to score, but a header following a corner kick flew on goal but sailed harmlessly over the cross bar.

Rider started the shootout with a goal, but Aledo midfielder Arwen Wise knotted the score with a goal.

Each team missed in the second round of PKs as AHS goalkeeper Emma Davis made a diving save on the Lady Raiders' second kick. Rider's third kick hit the cross bar, and Aledo sophomore midfielder Grace Ornelas followed by finding the back of the net for a 2-1 advantage.

Each team scored in the fourth set, and Aledo's goal was scored by freshman forward Ashlyn Laughley to give the Ladycats a 3-2 advantage.

Rider had to score on its fifth shot to stay in the match, but Davis smothered the kick with a diving save as her teammates rushed the field to mob their freshman 'keeper.

"We feel real good about the outcome when a game goes to PK's (shootout)," Ladycats head coach Bryan Johnson said. "This something we practice - little parts of the game you can practice like PKs, corner kicks and free kicks.

"Emma had some big saves in regulation, and she was huge in the shootout. Emma has something to prove, and she is working hard. I also thought our girls played well in regulation. I feel real good that we got two points out of this game instead of one."