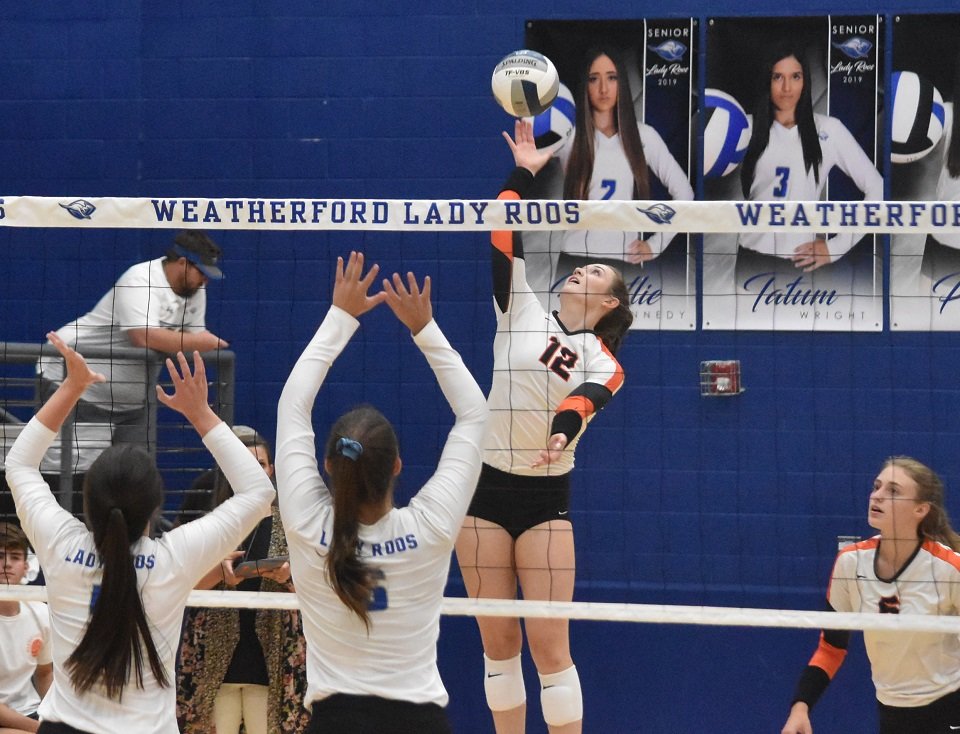 Aledo hitters Daleigh Ellison and Lilly Taylor combined for 44 kills to lead the Ladycats to a 25-19, 24-26, 25-16, 21-25, 15-13 victory over the Weatherford Lady Roos Tuesday night in an exciting non-district volleyball match at Weatherford High School.

The win elevates the Ladycats' record to 14-12, while Weatherford drops to 18-9. Aledo will continue non-district play at 5 p.m. Friday at Southlake Carroll.

The teams split the first two sets, with Weatherford needing extra rallies to capture game two, but in game three the Ladycats pulled away late, going on a 12-8 run to win the set by nine points and take a 2-1 lead in games.

In game four, Weatherford trailed 17-14 before going on an 11-4 run to seal the set and square the match at two games apiece.

Aledo led 10-8 in a back-and-forth fifth game and scored two of the next three points off a pair of kills by Taylor on assists by Gantt to take a 12-9 lead, needing just two more points to secure the win in the abbreviated game five.

On the ensuing rally, Gantt set up Ellison on the right side, and the senior slammed down a kill to give the Ladycats a 13-9 lead.

Weatherford notched the next point, and on the next rally, Gantt found Ellison again on the right side, and the senior sent down a kill for a 14-10 lead. Weatherford refused to give in and rallied to score the next three points to cut Aledo's lead to 14-13.

On the following rally - with Weatherford expecting another set to Ellison - Gantt crossed up the Lady Roos and sent a quick set to the middle to Alyssa Gribble, who sent down the match-winning kill.

For the complete story see the Sept. 6 issue of The Community News.