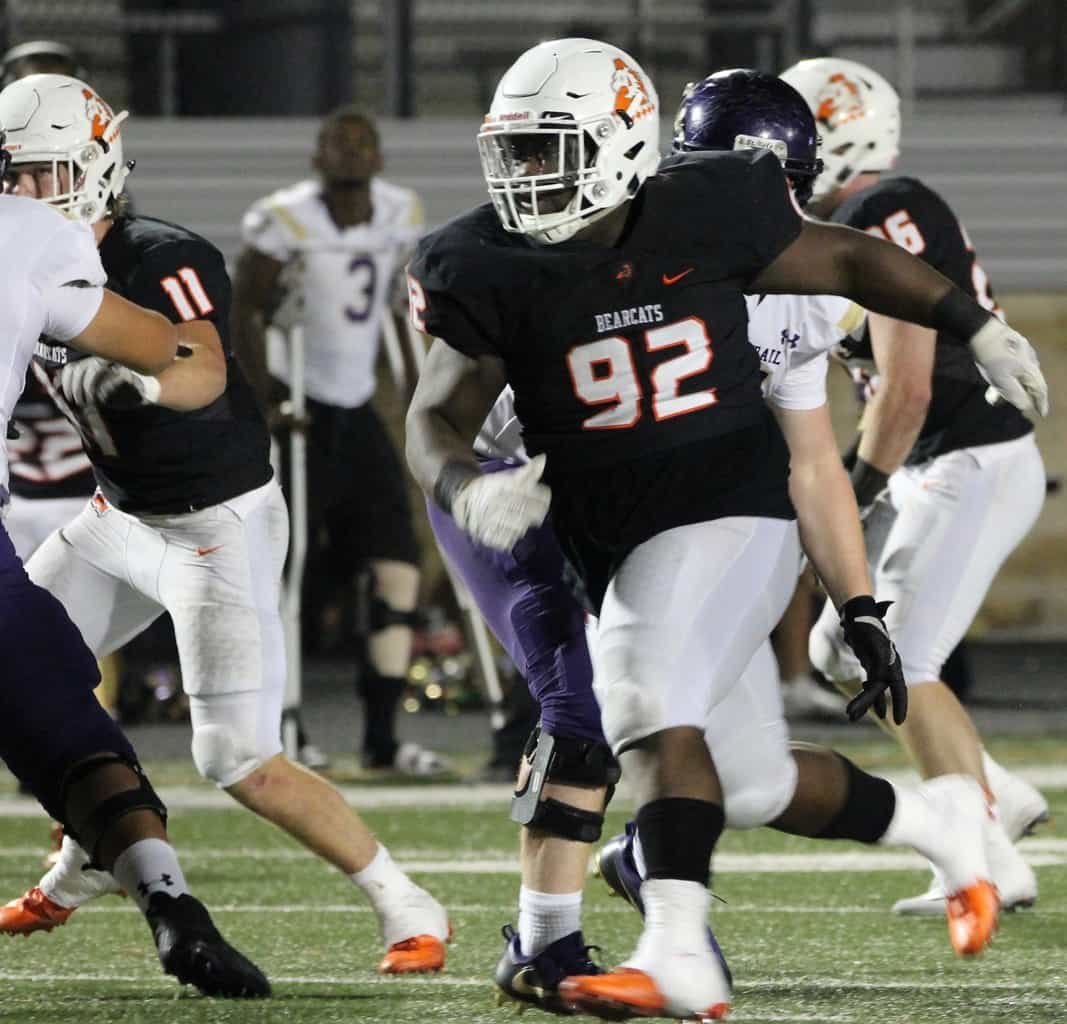 Aledo defensive tackle James Williams (92) is part of an Aledo defense that has been stingy in 2017. The Bearcats will continue District 6-5A play at 7 p.m. today at Saginaw. Photo by Karen Towery
Posted Friday, October 6, 2017 11:10 am

After a unique schedule that saw state-ranked No. 1 Aledo play its first four games at home, including the District 6-5 opener last week, the Bearcats will finally take to the road when district play continues at Saginaw.

Kickoff is at 7 p.m. today (Friday, Oct. 6) at Rough Rider Stadium on the campus of Saginaw High School.

Saginaw, at 0-4 (0-1 in district play), is seeking its first win of the season. The Bearcats are coming off a 56-7 victory over Chisholm Trail, but Bearcats head coach Steve Wood was not as pleased with his team’s performance coming off a bye week.

“We are perfectionists, and we want to execute at a 100-percent level. We want to score on every down, and we don’t want our opponent to score at all. (Against Chisholm Trail) we had too many what I would call mental breakdowns, especially offensively,” Wood said. “That kept us from being as efficient as we wanted to be. We just have to work that out. We have to coach them better; and the players have to focus better, so it is a combination of things. But I think our effort was good.”

Wood does not judge Saginaw by its record, and said the Rough Riders played a difficult non-district schedule (Burleson, Fort Worth South Hills, Keller Fossil Ridge). The Rough Riders fell 63-3 to Brewer in their 6-5A opener last week.

Saginaw is coached by Dane Johnson, the former Southlake Carroll and Texas Tech star fullback. He is in his second year as SHS head football coach.

“Dane was the head coach at Flower Mound for several years, and became a head coach at a pretty young age,” Wood said. “He has done a good job, and he is a good guy. He has been at Saginaw a couple of years and is building a program.”

For the complete advance on the Aledo/Saginaw game see today’s issue of The Community News.

Hoping to maintain second place and stay within a match reach of the district leaders, the Aledo Ladycats travel to Saginaw for a 6-5A volleyball match.

Ladycats' fans need to take note on a time change. The Ladycats and Saginaw varsity match will start at 5:30 p.m. at Saginaw High School.

Aledo swept Saginaw in the first round of district play.

Aledo is coming off a sweep Tuesday at Brewer, and junior hitter Hannah Jones enjoyed a productive week with 32 kills in the Ladycats previous two matches. On Tuesday Aledo also welcomed back all-state senior hitter Sarah Haeussler, who missed two league games as she went through concussion protocol. Haeussler had 12 kills and four blocks against Brewer.

Aledo hitter Evelyn Torres (15) sends down a kill during a recent match. The Ladycats will continue district play at 5:30 p.m. today at Saginaw. Photo by Tony Eierdam