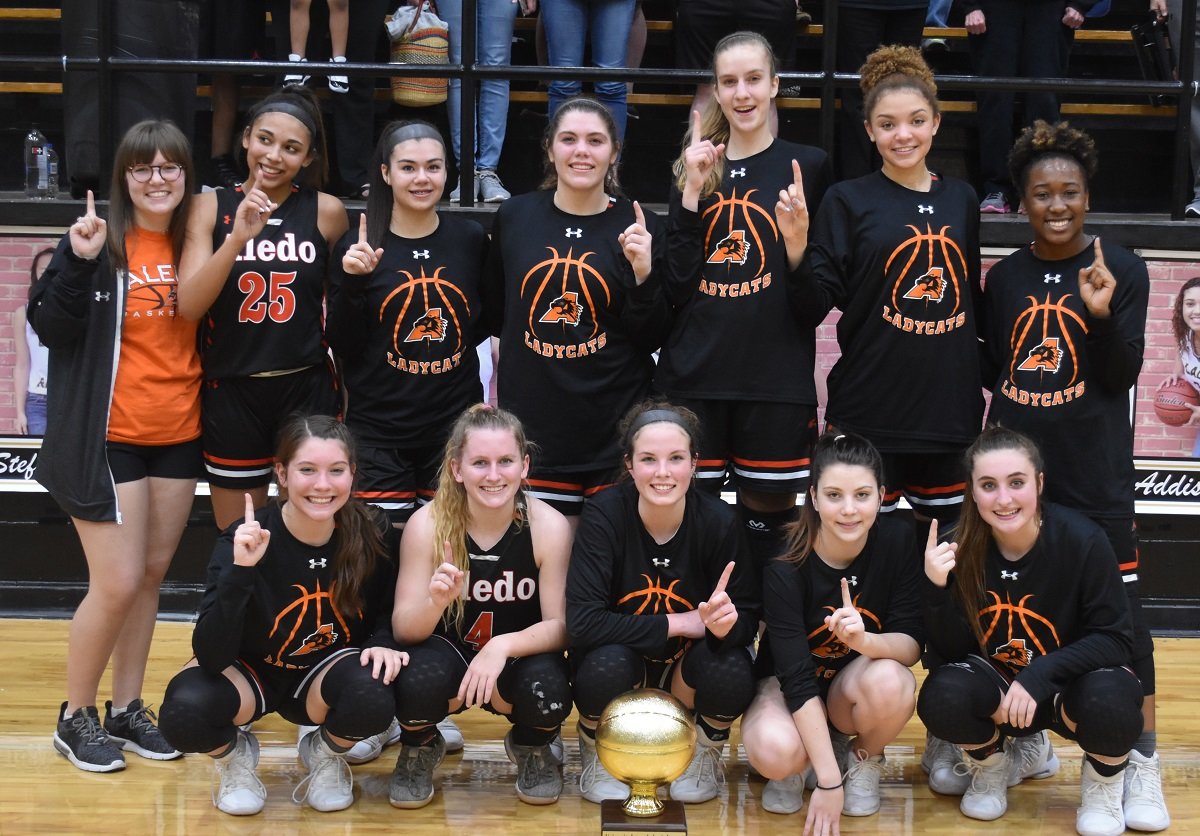 Just call them the undefeated District 4-5A champions.

The win gives the district-champion Ladycats a final league mark of 8-0. The Ladycats have earned the top seed in 4-5A and will face the fourth-place team from District 3-5A next week in the bi-district playoffs.

“It feels awesome to go undefeated in district,” senior guard Elizabeth Allanach, a four-year varsity starter, said. “We have come together as a team and everybody is doing a good job of playing their roles.”

The Ladycats led 11-3 after the first quarter and outscored the Lady Raiders 21-5 in the second quarter to take a 32-8 lead at the half. Aledo scored 12 points in the third period while holding Rider to nine for a comfortable 44-17 advantage as the game moved to the fourth quarter.

Also scoring for the Ladycats were Audrey Pearce with five points, Kylie Anderson with four, and Emma Fowler and Melia Miller, each with two.

Wichita Falls Rider stayed undefeated in District 4-5A after a 64-51 win over the Aledo Bearcats Tuesday night at Rider High School.

The loss drops the Bearcats to 4-3 in district play, while Rider raises its 4-5A record to 6-0.

Leading the Bearcats in scoring was Truen Johnson with 15 points. Also scoring for Aledo were Cole Nitsch, Tre Owens and Max Newell, each with eight points, Dietrich with six, and Austin Hawkins and JW Comiskey, each with three.

The Bearcats, paced by a three-pointer each from Tre Owens, Max Newell and Reid Dietrich, jumped out to a 13-2 lead. But Rider came back with a 5-2 run to cut the Bearcats’ lead to 15-7 after the first quarter.

Rider scored 18 points in the second quarter while holding Aledo to nine to take a 25-24 lead at the half.

The Raiders outscored the Bearcats 24–13 in the third period to take a 49–37 lead into the fourth quarter.

Aledo senior post Truen Johnson (14) looks down low for an open teammate during the Bearcats’ loss at Wichita Falls Rider Tuesday night in a District 4-5A game. Photo by Tony Eierdam[/caption]