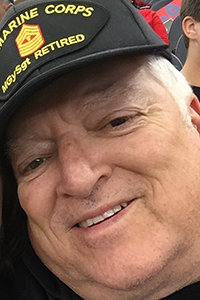 Herbert T. Giles III, beloved husband and father, passed away at the age of 70 on Friday, August 2, 2019 after a six-year battle with cancer. Herb passed peacefully in his home in Aledo with his wife of 40 years, Vivian Giles, and daughter Alyson Giles.

Herb was born June 1, 1949, in Butler, Pennsylvania, and grew up in San Antonio. He was a resident of Aledo for 21 years.

In 1966, he became a United States Marine and served proudly and honorably for 30 years, completing three tours in Viet Nam and achieving the rank of Master Gunnery Sergeant. Upon his retirement, Herb took his Marine Corps logistical/hazardous materials knowledge to Hyundai Merchant Marine in Los Colinas and became the Hazardous Materials Manager until his second retirement in 2013.

Herb had a personality larger than life and will be remembered for keeping true to his Marine Corps standards, inspiring those who worked around him to put forth their best efforts; one of his favorite sayings was, “Don’t confuse efforts with results.” Herb had a passion for motorcycles and the open road, completing as many trips with friends as he could. He also loved watching the Aledo Bearcats football team and never missed a game until he was too weak to attend, but listened to the game on the radio.