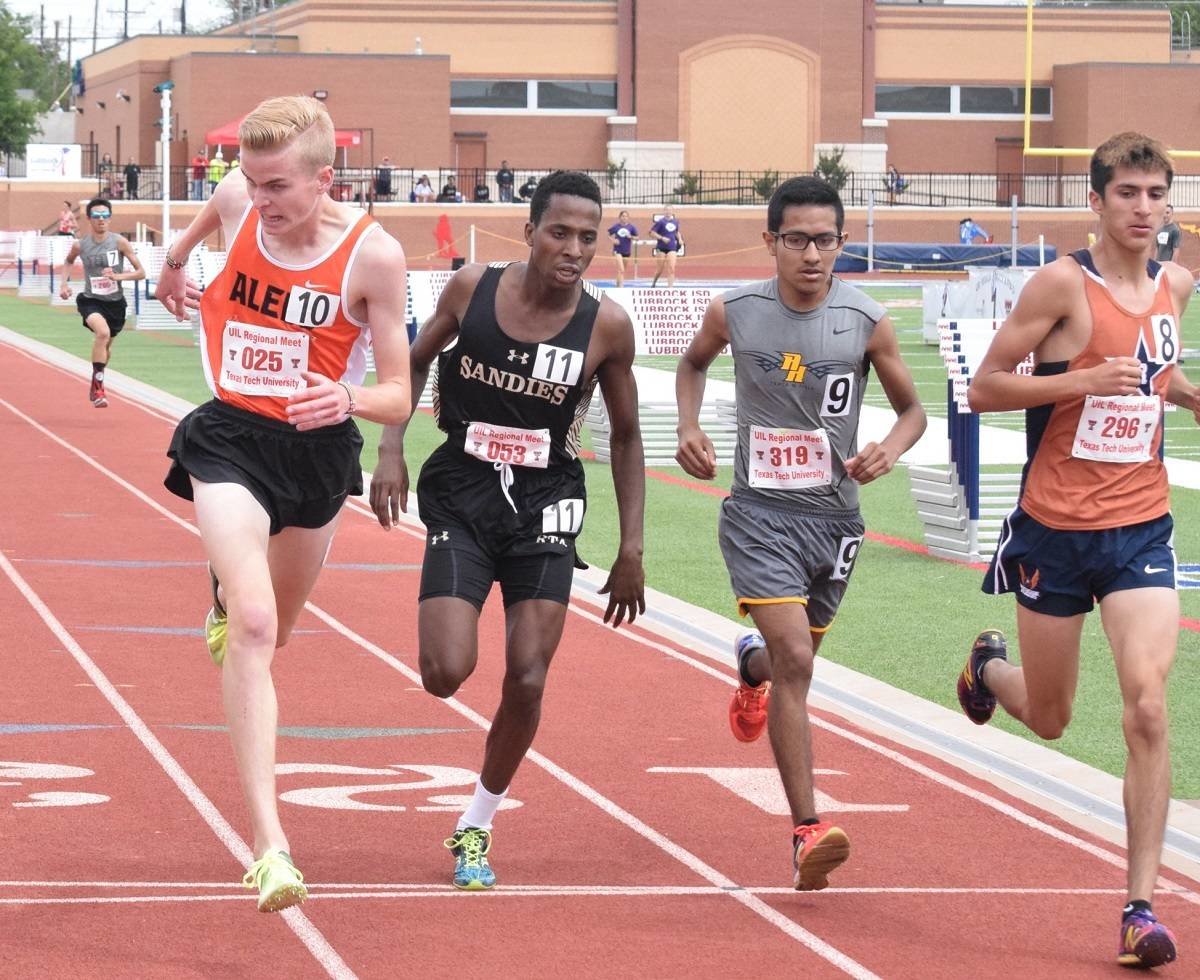 Aledo long-distance runner Graydon Morris stretches over the finish line to win the boys' 3,200-meter run Friday at the regional meet in Lubbock. He will advance to the state meet in Austin. Photos by Tony Eierdam
Posted Friday, April 28, 2017 10:36 pm

Aledo freshman Graydon Morris ran a time of 9:29.12 to win the boys' 3,200-meter run Friday morning at the Class 5A, Region I Track and Field Meet at PlainsCapital Lowrey Field in Lubbock.

Morris said he had to abandon his strategy early in the race. He took the lead on the fourth lap, lost the lead for about two laps but regained the lead for good on the last turn of the second-to-last lap. But it looked like three runners had a chance to win as all appeared to be tied on the final 10 meters of the race.

But like a sprinter in a short race, Morris leaned forward at the finish line and won by less than a tenth of a second (0.09).

"I wanted to go for time, but on the first two laps I kind of got boxed in, so I kind of threw out the thought of a fast time out the window and just worked on strategy," Morris said. "I didn't expect the last 200 to be that quick.

"But (Amarillo's Butare Rugenerwa) kicked past me in the last 100 at state (cross country meet) and I didn't want that to happen again, so I dug deep."

Morris was in unfamiliar territory when Rugenerwa passed him during the fifth lap of the race. Morris and Aledo senior Harrison Tillman had been neck-and-neck during the first half of the race,

"I usually kick (the last 500 meters of the race), so when he passed me I kept with him and then passed him on the turn," Morris said. "(In the final 100 meters) I just moved outside and little and leaned over the (finish) line. I feel happy to go to to state. But I am glad I beat (Rugenerwa), who won state cross country. He will be a big contender (in the 3,200) at state."

Today (Friday, April 28) was the first day of the two-day meet. Some field events and running preliminaries were held. Finals and the rest of the field events conclude Saturday.

In field events, Aledo may have well qualified its second athlete to the state meet. Ryan Brown set a personal-best mark of 13 feet, six inches in boys' pole vault, eclipsing his old mark by six inches. He finished third. The top two finishers in each event at the four regional meets advance to the state meet.

In other Aledo field events, Erin Weiss did not reach the finals of girls' shot put, and Chuck Filiaga was injured and could not compete in boys' shot put. Also, the boys' 4x400 relay team did not advance to the finals.

In preliminary running events, Kia Jordan finished seventh in the girls' 100-meter dash and will race Saturday in the finals, and Bearcats hurdler Regan Rice did not reach the finals in the boys' 300-meter hurdles.

Ryan Brown is shown hitting his personal-best mark of 16 feet, six inches during boys' pole vault at the regional meet. He finished third but may qualify for state as a wild card.

Senior Kia Jordan races toward the finisih line Friday during the girls' 100-meter dash. She finished third in her heat and advances to Saturday's finals.

Regan Rice, right, hands the baton to Gio Torrez during the boys' 4x400 relay during Friday's preliminaries at the regional meet.

Beau Mask, left, waits to receive the baton from Jake Ford during the boys' 4x400 relay.