For all the marbles: Ladycats to face No. 1 Highland Park Saturday in girls’ 5A state soccer championship 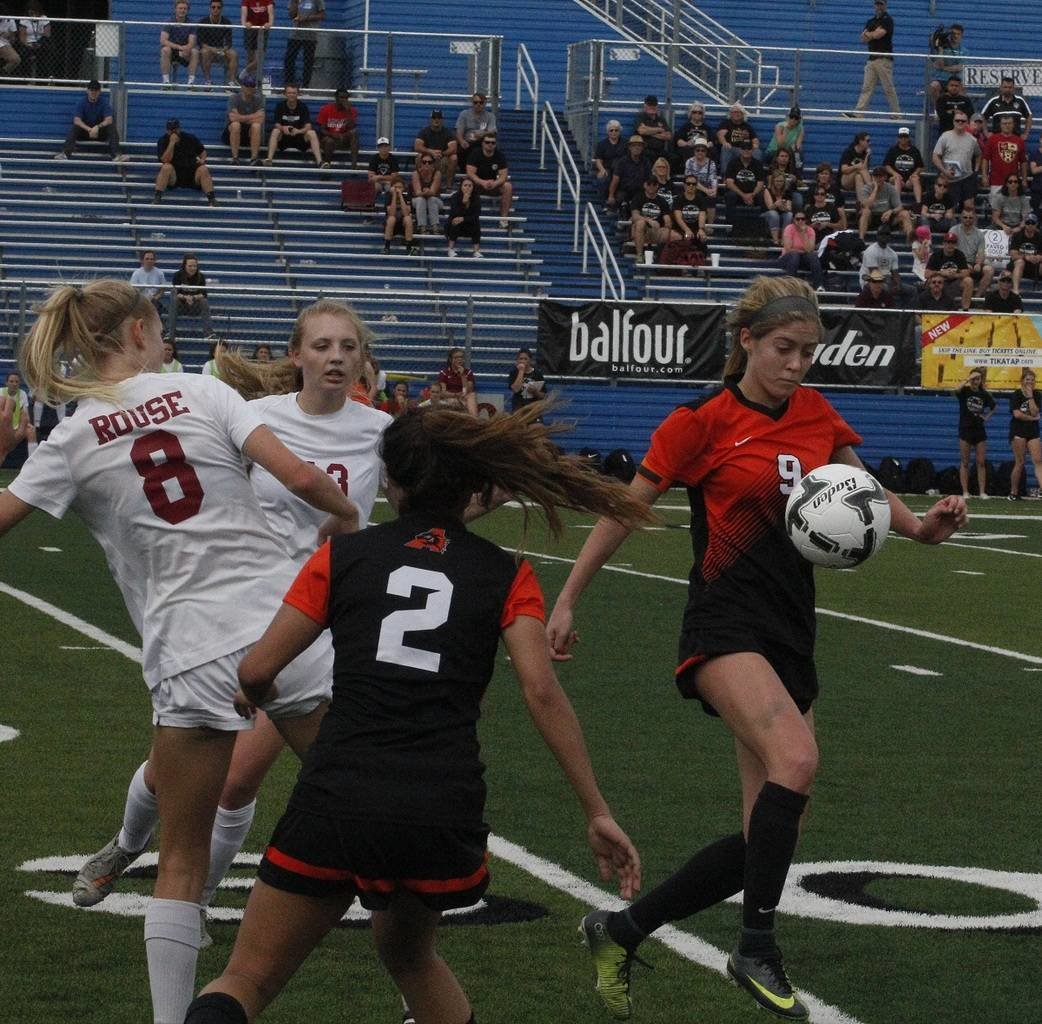 After a comeback win in the Class 5A state semifinals Thursday in a 3-2 overtime victory over Leander Rouse, the Aledo Ladycats have a chance to make program history when they face wire-to-wire No. 1 Highland Park Saturday in the girls’ Class 5A state soccer championship match.

The match is set for 11 a.m. Saturday at Birkelbach Field in Georgetown.

The Ladycats dug down deep to capture an overtime victory in the state semifinals, the furthest any Ladycats soccer team has advanced. And once again, they defeated a team in the playoffs with a better record and higher ranking.

Although speed on offense with forward/midfielders Peyton Laughley, Cameron Huddleston and Brooke Jones has been the detriment to every Aledo playoff opponent, the Ladycats got the job done defensively on Thursday in the semifinals win.

Leander Rouse was led by 35-goal scorer Haley Hoppe, who had scored six goals in the playoffs coming into the state semifinals. But not only did Hoppe not score a goal against the Ladycats, she never got off a shot. It was a deciding factor in the outcome of the match. In contrast, Aledo’s leading scorer, Laughley, scored twice against Rouse, including the tying goal late in regulation that sent the match into overtime.

Ladycats head coach Bryan Johnson “shadowed” Hoppe with speedy defender Ellie Reese, and added another wrinkle in his strategy to keep one of the state’s leading scorers off the board.

“Our strategy was to push (Hoppe) to the right and not allow her a shot on her left foot,” Johnson said. “We wanted to keep as much pressure on her as we could. Her speed was a concern so Ellie was the choice to match with speed.

“On corners (corner kicks), we wanted to box her in with (junior defender) Ashlee Ray and Ellie. Luckily, we never were threatened on corners because we only gave them four. I felt we played her well.”

With less than 13 minutes remaining in Aledo’s semifinal match, the Ladycats trailed 2-1. But that is when the players Johnson has depended on all season stepped up and would not let that match be the final match of the season.

“Peyton’s second goal was clutch and it came when they had moved Hoppe to center back,” Johnson said. “I felt they got a little unorganized after our second goal. We were able to push more people and when Peyton made the run and dropped off and Cam picked up and passed back to Peyton running on to the ball I just knew she would bury that shot.

“The final goal by Cam (Huddleston) is one you dream of as a player. It was a great set up for her and a perfect position. The better team won but soccer is a mean sport that doesn't always allow that to happen. Thankfully we got the last opportunity and capitalized. After 37 shots you knew one would have to fall.”

Although it won just 2-0 in its semifinal, Highland Park controlled the ball for the majority of the match against Boerne Champion, and outshot Champion by a 16-0 count. The Lady Scots have won three playoff matches by scores of 2-1, indicating that when they get the lead they keep it, and usually through deft ball control.

“We will need to make the chances we are given,” he said. “Keep pressure on their back four (defenders) and take opportunities when they present themselves. We will need to be as defensively sound as we have been all year and contest every shot.

“I know they are No. 1 and have two tremendous forwards (Presley Echols, Rachel Wasserman). I don't know how much they have been tested defensively. Hopefully we can give them our best and make them earn everything.”

Johnson feels this has been a special, successful season no matter the outcome of Saturday’s title match.

“It's been a tremendous season and no matter win or lose it will be a sad day because this is an awesome team on and off the field,” Johnson said. “It's a team you wish you could keep together forever. I love each one of them!”

Aledo junior defender Ellie Reese (6) shut down Leander Rouse's leading scorer to help the Ladycats win the state semifinal match Thursday at Georgetown. The Ladycats play for the 5A state championship against No. 1 Highland Park at 11 a.m. Saturday at Georgetown.