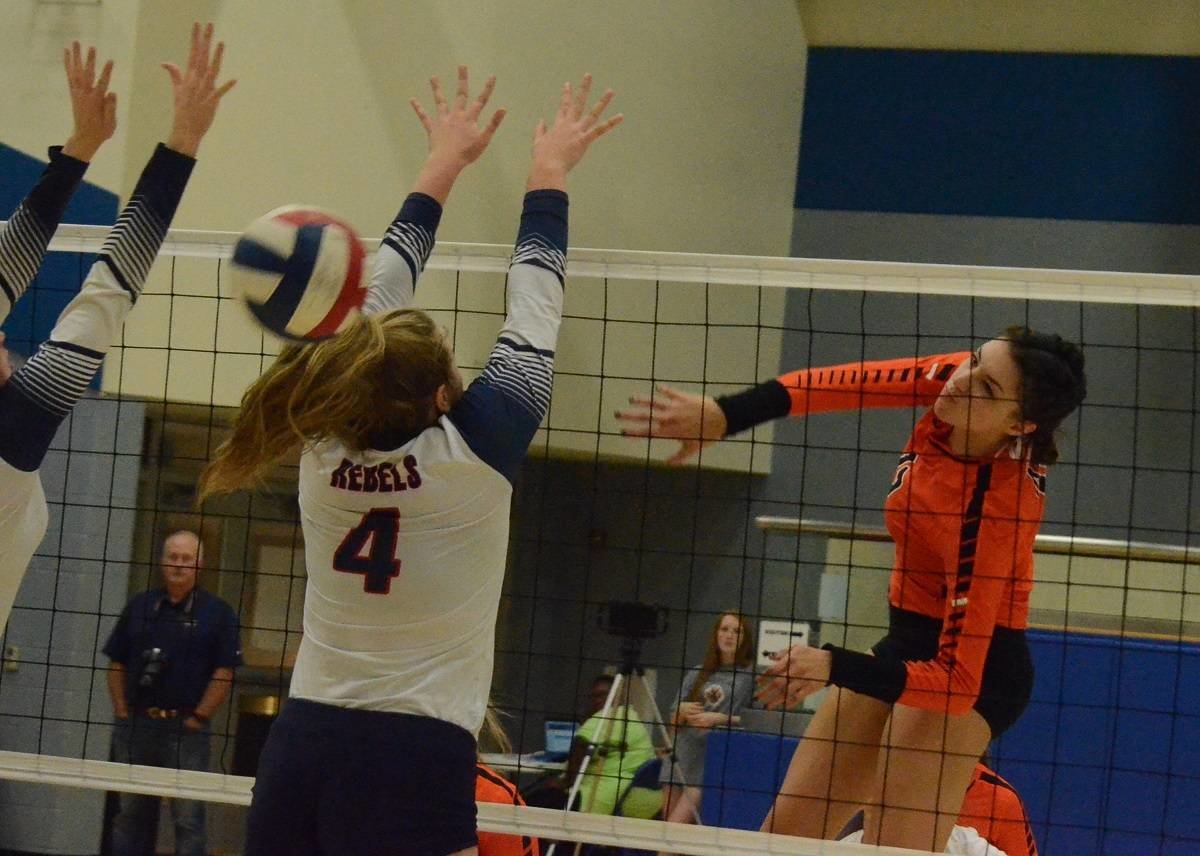 Aledo senior hitter Maddie Goings (13) sends down one of her 18 match-high kills Tuesday night during the Ladycats' 25-15, 25-9, 25-19 victory over Richland in a Class 5A area championship match at Brewer High School. The win advances state-ranked No. 7 Aledo to the regional quarrterfinals.
Posted Thursday, November 3, 2016 8:57 pm

Paced by a fast offense and solid defense, the state-ranked No. 7 Aledo Ladycats decisively defeated Richland, 25-15, 25-9, 25-19 Tuesday night in a Class 5A area championship volleyball match at Brewer High School.

The win advances the Ladycats (37-8) to the regional quarterfinals where they will play the winner of Friday night's area match between Grapevine and Denton Ryan.

"I thought we played very well offensively," Ladycats head coach Kathy Goings said. "Brecken, Emily, Maddie, Amanda, Sarah (Haeussler) ... they all were pounding the ball. Defensively, we had some great digs, and Sydney (Casey), Allegra and Aislinn held down the back row. We played good defense tonight.

"Our plan coming in offensively was to play a faster offense (quick, short sets to hitters), and as we go deeper in the playoffs our offense will have to be even faster than it was tonight. Erin did a good job of moving the ball fast."

The Ladycats began the match a little sluggish and held a 12-11 lead after 23 rallies. But Aledo caught fire and went on a 8-1 run to take a 20-12 lead. Roquemore fired a pair of aces and Pool added an ace in the run, with Smith sending down two kills and Norman and Haeussler each adding a kill.

Goings recorded kills on the Ladycats' last three points to clinch the opener.

Game two was a runaway. The Ladycats jumped out to a 10-4 lead and built a 16-6 advantage after a Richland return error. Later in the game, two kills each by Goings and Roquemore and an ace by Goings brought the contest to game point.

On the ensuing rally, Haeussler elevated for a block to seal the set as Aledo led 2-0 in games.

Scrappy Richland did not back down and the Rebels played solid defense as Aledo led just 19-15 as Richland tried to avoid a sweep.

But two kills from Smith and a kill each by Norman and Goings extended the Ladycats' lead to 23-15. Richland scored the next point before Weiss sent a quick, short set to Smith, whose thunder-spike kill brought game three to match point.

Much to its credit by refusing to give up, Richland scored the next four points to cut the Ladycats' lead to 24-19.

However, on the ensuing rally, a Richland service error gave the Ladycats the point they needed to clinch the match and advance to the third round of the playoffs.