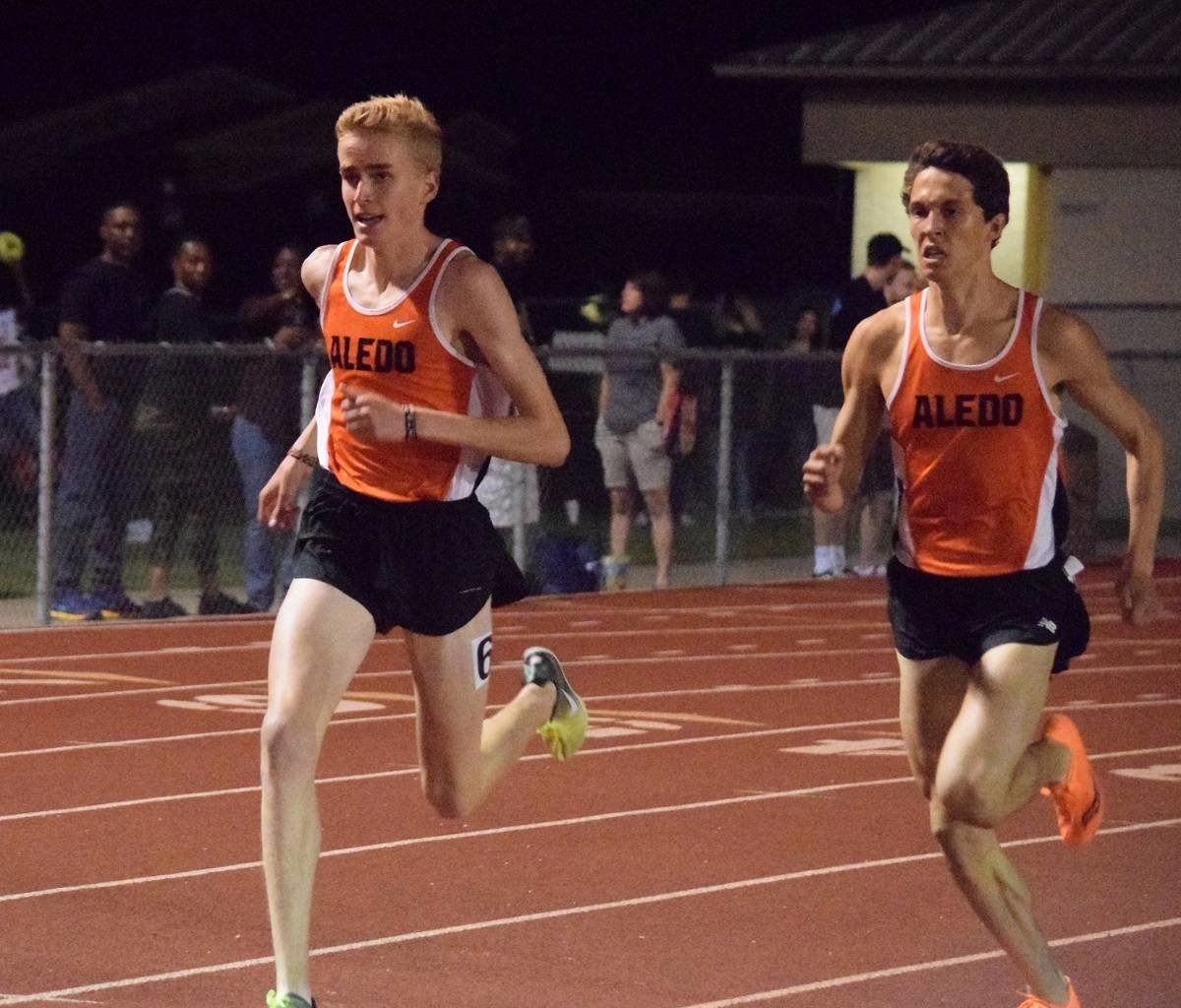 Aledo freshman Graydon Morris (left) and Harrison Tillman, shown in the 1,600-meter run at the area track meet, each qualified for the regional meet in the 3,200- and 1,600-meter runs. Morris won both races, and Tillman finished second in both events. Photo by Tony Eierdam
Posted Thursday, April 27, 2017 12:05 pm

Aledo High School long-distance runners, sprinters, throwers and jumpers will have a chance to advance to the state track meet when they compete Friday and Saturday at the Class 5A, Region I Track and Field meet.

The two-day meet will be held at PlainsCapital Park Lowery Field in Lubbock.

The top two finishers in each event advance to the state track meet in Austin.

Perhaps the track/cross country story of the year is freshman twins Gracie and Graydon Morris, who have won every long-distance race they have entered (Texas high school meets), including Gracie at the competitive Texas Relays.

Veteran Harrison Tillman is another successful distance runner, as he and Graydon Morris took the top two spots in both long-distance races (3,200-meter, 1,600-meter runs) at the district and area meet (Graydon placed first in both meets).

“Graydon and Harrison both have a great opportunity to qualify for the state meet,” he said. “They both sit in the Top 3 in the 1600 and 3200. Graydon is coming in with the fastest time in both events and Harrison is right behind him in the 1600 and third in the 3200.”

Ladycats head coach Nikki Hyles moved Gracie Morris out of the 3,200-meter run and placed her in the 800-meter run. She won both the district and area meet in the 800 while also duplicating that feat in the 1600.

“Gracie has had a very successful season so far, and has the fastest times going into regionals in both the 800 and the 1600 races,” she said. “She is running well and is determined to compete at a high level in Lubbock.”

Another Ladycat seeking a state berth is girls’ 100-meter sprinter Kia Jordan, a senior who has been slowed by a leg injury. Jordan, who finished fourth at state last year in the girls’ 100, has been resting the leg, and she will go into the regional meet ready to go all-out for the first time in two weeks.

“Kia,” Hyles said, “has a good shot at going back to state in the 100-meter dash. She has been battling a strained hamstring since our meet in March, so having two weeks before regionals has helped give her time to heal and prepare.”

In field events, the Ladycats have qualified two pole vaulters, Sierra White and Mackenzie Lyon, to the regional meet along with throwers Erin Weiss (discus) and Alaina Touchet (shot put).

“Sierra is coming off of a PR (personal record) at the area meet,” Hyles said. “She has one of the better jumps coming into the regional competition and has a great chance at qualifying for state again.

“Alaina and Erin are both focusing on their techniques in throws, and look to compete well. Mackenzie is returning to regional for her senior year and looking forward to the competition in Lubbock.”

Christenson will field the school’s lone relay team, the 4x400 relay, and along with his distance runners will have a 300-meter hurdler, Regan Rice, also competing for a chance to advance to state. Ryan Brown (pole vault) and Chuck Filiaga (shot put) are making their first appearances at the regional meet.

“I was very pleased with the number of kids we have going to regionals this year,” he said. “After the tough injuries we had, along with some other factors, we got stretched pretty thin and asked our guys to run a few more events that maybe they would have not had to normally.

“It was great to watch our guys compete and continue to improve and make their way in to regionals. For instance, Regan had a great finish to get fourth in district and make it to area and then runs the best race of his season and finishes second at area with a chance to finish in the Top 6 at regionals.

“I know the guys really want to break that school record, which is a 3:24.5. They will need to be about a second faster to get it.”

Aledo freshman Gracie Morris qualified for the regional meet in both the girls' 800-meter and 1,600-meter runs. Photo by Tony Eierdam