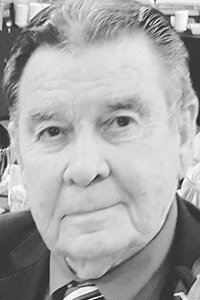 DW “Dub” Bransom, Jr. passed peacefully at home with Jesus and his loving wife by his side on August 18, 2019.

Dub was born July 7, 1937, in Fort Worth. He raised a family and resurrected the original Bransom Hardwood Floors while serving full-time as a Fort Worth police officer, where he retired in 1983. He then ran for Tarrant County Sherriff, only losing by a small margin.

After retirement he was hired as the City of River Oaks police chief and then received a Presidential appointment as the United States Marshal of North Texas. After seven years as U.S. Marshal, he ran and won three terms as Constable of Tarrant County Precinct 4. His health declined forcing him to retire in December of 2016.

Dub was a friend to all, loved old cars, and served the Tarrant County area with honor and dignity. His pride and joy was his family.

Dub was preceded in death by his parents, an infant son, his only brother Charles, and the Mother of his children, Shirley Bransom-Cosper.

2 Timothy 4: I have fought the good fight, I have finished the race, I have kept the faith.