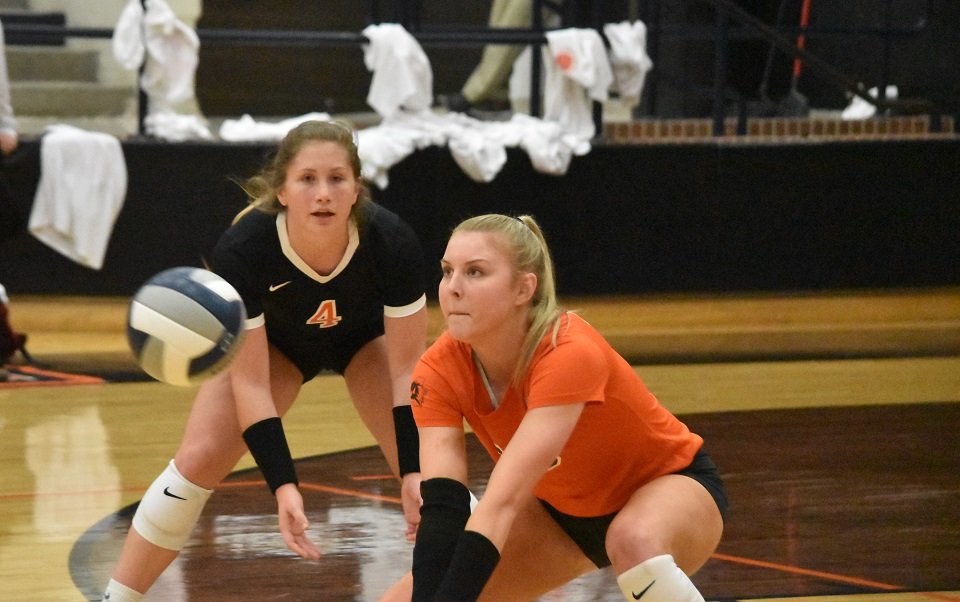 Aledo hitter Alex Grooms digs a ball as libero Riley Pickett gets into position Tuesday night during the Ladycats' loss to No. 1 Lucas Lovejoy at the AHS gym. Photo by Tony Eierdam
Posted Tuesday, September 17, 2019 9:58 pm

She could not have had a better barometer when her team faced the top team in Class 5A, Lucas Lovejoy, on Tuesday night at the AHS gym.

"I told the girls that this match proved we can play with anybody," Gay said. "It was a point-for-point match, especially in the first three sets, but (Lovejoy's) experience and a few smarter decisions were the difference in this match.

"I think we played really well defensively. Our blocking was awesome, and our hitters did a good job of making Lovejoy make decisions when they swung which put the ball in our defenders' platform because our block was set up properly.

"I think we scrambled (for hard-to-get balls) well, we didn't give up and fought really hard. I am proud of our girls."

Daleigh Ellison and Lilly Taylor each sent down 12 kills to lead the Ladycats, with Alex Grooms adding 10. Audrey Pearce had a team-high seven blocks to go along with eight kills, and setter Mattie Gantt dished out 38 assists.

The Ladycats jumped out to a 19-14 lead in game two, but Lovejoy came back and cut the lead to 22-21. A kill by Grooms followed by a Lovejoy wide return put the second set at game point with Aledo leading 24-21.

Two rallies later, Pearce sent down a kill from the middle to give the Ladycats a 25-22 win to square the match at a game each.

Aledo led 6-1 in game three, but Lovejoy quickly came back and tied the game at 7-7. From that point, the set was tied four more times, settling at 19-19.

But Lovejoy outscored the Ladycats 6-3 to close the third set and take a 2-1 lead in games.

Lovejoy raced out to a 12-6 lead in game four and never looked back, taking the game 25-15 to seal the match.

For the complete story see the Sept. 20 issue of The Community News.