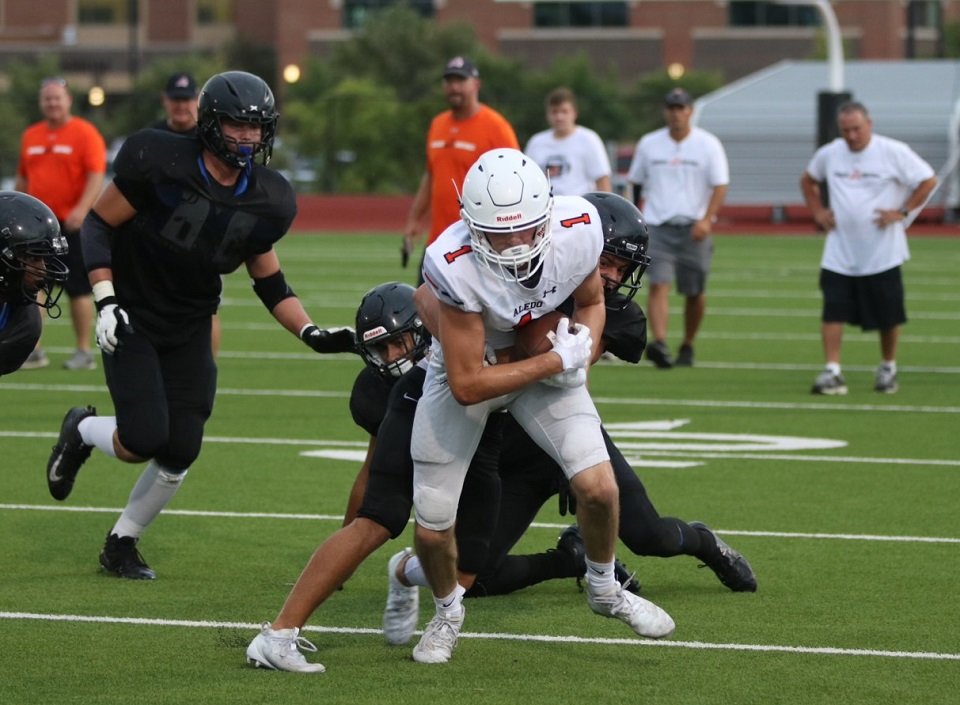 In their final tune-up before next week's season opener, the Bearcats' first offensive unit found the end zone four times and the Aledo defense created a pair of turnovers during a scrimmage against the Byron Nelson Bobcats Friday night at Byron Nelson High School.

On first and 10 from the Aledo 35, quarterback Jake Bishop tossed a screen pass to tailback Jase McClellan, who sprinted down the left sideline past four defenders to complete a 65-yard touchdown play.

Since this was during the controlled portion of the scrimmage, the Bearcats got the ball back on their own 30. On the next play, Bishop threw a pass down the middle to speedy receiver Money Parks, who caught the pass about 20 yards down the middle of the field and would not be caught, sprinting 50 yards to complete a 70-yard touchdown.

With the ball back again at its own 30, Aledo found the end zone again, this time on a brilliant catch-and-run by receiver Jo Jo Earle. Bishop fired a pass to the middle for Earle, who caught the ball in stride, cut to his right and immediately cut sharply back to the middle where he outran a pair of defenders to the end zone.

The Bearcats added another TD during the 15-minute quarter when McClellan completed a six-play, 70-yard drive with a 12-yard TD run. McClellan had broken two runs of 15-plus yards during the drive.

The Bearcats second and final drive of the timed portion of the scrimmage ended on a 36-yard field goal by Morgan Huhtanen.

Another Bearcats touchdown came from the second offense on a gritty one-yard plunge by tailback Matt Tague.

The Bearcats' defense sent a message early, holding Nelson to a three-and-out to begin the scrimmage. The Bearcat Black Shirts also recorded a pair of turnovers including a fumble recovery by defensive tackle Carson Barry and a "pick-6" interception by Nolan Garcia.

For more see the Aug. 30 issue of The  Community News.