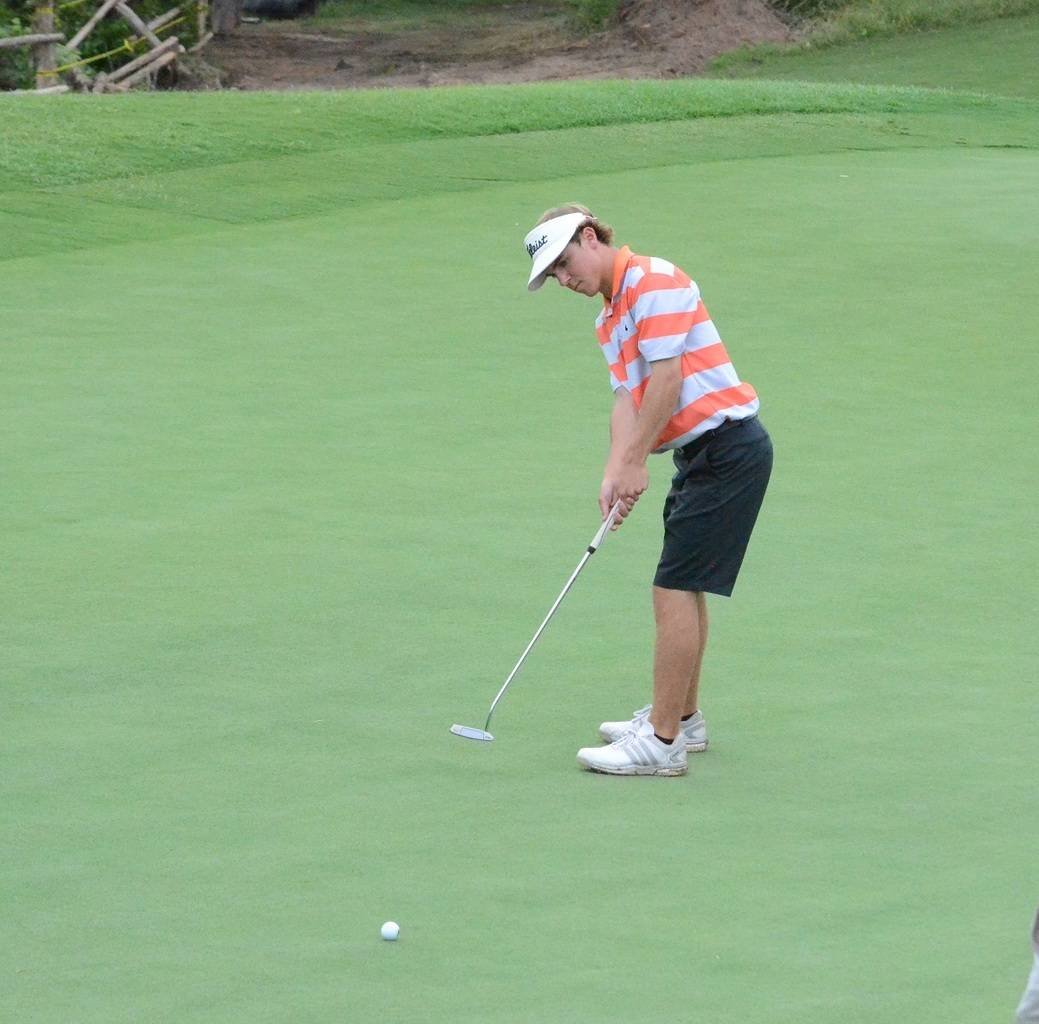 Aledo senior Parker Scaling putts on hole No. 18 Monday afternoon at the 5A state boys golf tournament at Wolfdancer Golf Club near Bastrop. Scaling paced the Bearcats with a four-over-par 76. More photos at bottom of article. Photos by Tony Eierdam
Posted Monday, May 22, 2017 5:52 pm

Paced by a 76 from Parker Scaling, the Aledo Bearcats golf team shot a score of 339 and sit in 12th place after one round of the 36-hole Class 5A state golf tournament Monday at Wolfdancer Golf Course near Bastrop.

The first round on the par-72 course was not played under ideal conditions. Overnight rain left the course soft - although it held up remarkably considering the amount of rainfall - and players did not get much of a roll on their golf balls.

"This is a tough course," Aledo High School head golf coach Jeff Lemons said. "The players did not get the roll - get the carry - because of the weather, and although we faced almost similar conditions (Sunday) in our practice round, it is different (at the state tournament) when the lights come on.

"Three of our guys (Ben Huxtable, Evan Pennington, Austin Griffith) have never been here (state) before, and it is a different world at this level. And although Parker and Andrew (Lane) were here as sophomores, it has been a couple of years since they played this course."

Other Bearcats scores include Ben Huxtable with an 85, Evan Pennington with an 86 (including a birdie on par-four No. 11), Andrew Lane with a 92 and Austin Griffith with a 93.

Scaling, who birdied hole No. 6, a par three, was three over at the turn and shot one over on the back nine. He finished his round with four consecutive pars.

"Parker really didn't hit the ball very well but still managed a 76," Lemons said. "He struggled hitting greens (in regulation), but his score shows you how much he fought to still pull that score out. To pull out a 76 - as poorly as I know he felt he hit the ball - is remarkable. I will say this about Parker, he never has back-to-back bad rounds, but then again, none of our guys have this year.

"I really expect everyone to bounce back tomorrow and make better showings."

Highland Park shot a 294 and has a 10-stroke lead over San Antonio Alamo Heights, Cedar Park and Granbury, all tied for second after posting identical rounds of 304.

"All I want to see tomorrow is improvement from everyone," Lemons said. "You always want to be better the second day then you were the first day. If a medal happens, a medal happens (top three teams medal), and there is really no pressure once you get here. There is no move on - no advancement - after this.

"So I think the guys will be relaxed tomorrow and will play relaxed. I fully expect them to play better tomorrow."

Ben Huxtable sends an approach shot toward the green Monday during the boys' 5A state golf tournament. He finished with an 85. The second and final round of the state tournament will be played Tuesday.

Evan Pennington watches his putt on No. 18 Monday during the boys' 5A state golf tournament. He finished with an 86.

Andrew Lane putts the ball near the cup Monday during the boys' 5A state tournament. He finished the first round with a 92.

Austin Griffith sends an approach shot high and long at scenic Wolfdancer Golf Club near Bastrop. Griffith finished the first round of the boys' 5A state golf tournament with a 93.