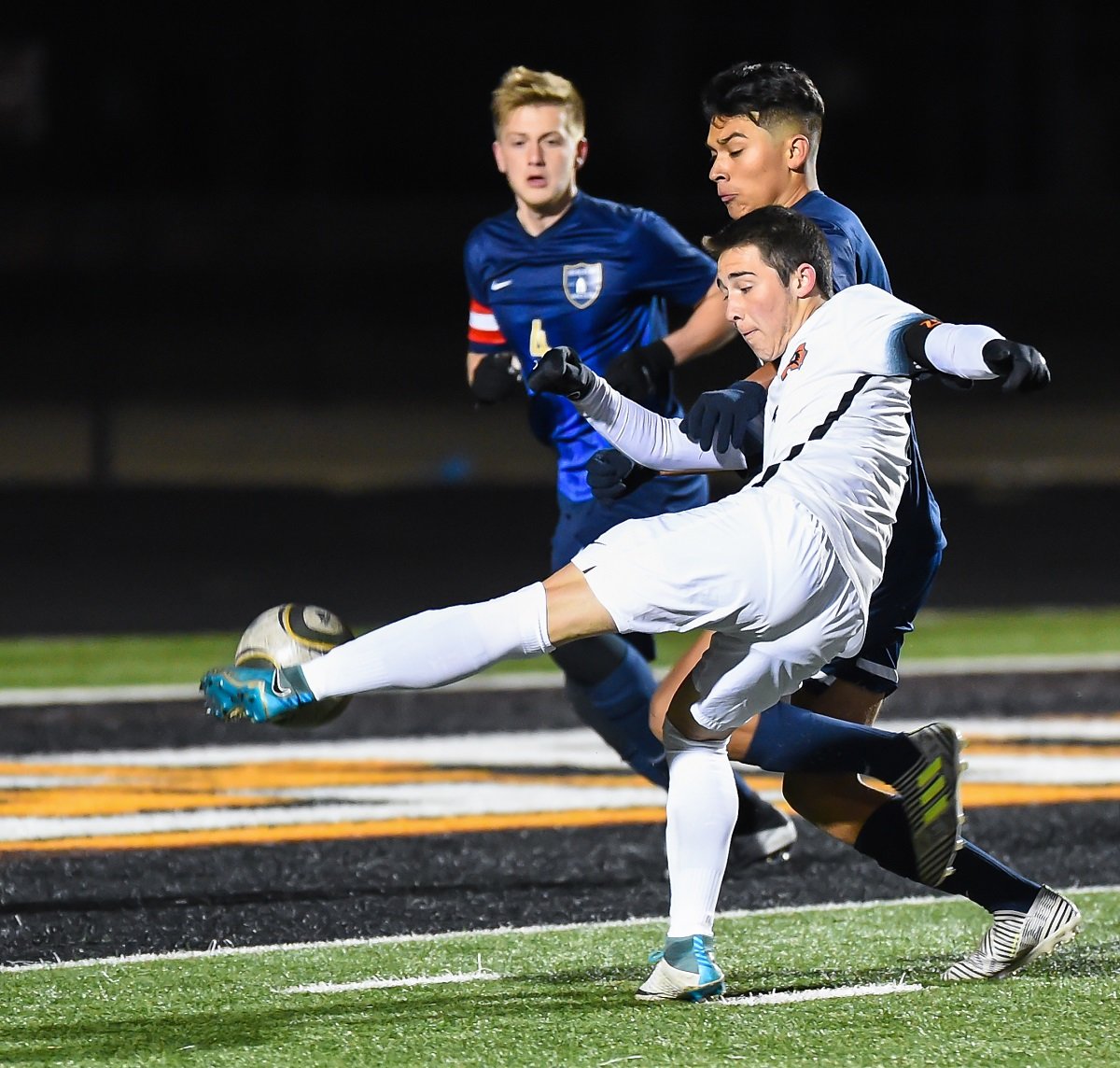 Aledo junior midfielder Brandon Wrinkle takes a shot that would find the back of the net for a goal Saturday night during the Bearcats' shootout loss to Arlington Heights. Wrinkle also scored in the shootout. Photo by Howard Hurd
Posted Saturday, January 13, 2018 9:58 pm

Fort Worth Arlington Heights scored in every shootout frame and defeated the Aledo Bearcats Saturday night in the boys’ championship match of the Moritz Kia Tournament of Champions at Bearcat Stadium.

The score was tied 1-1 at the end of regulation. Heights almost won the match in regulation with about three minutes left, but Aledo goalkeeper Konrad Garbowski turned the effort away and the title match went into the shootout session, where players shoot from the penalty kick mark.

Aledo senior forward Max Owens began the shootout session, and his shot clearly beat the Heights ‘keeper. But the soccer gods were not with Owens, whose shot caromed off the goal post.

Heights scored for a 1-0 lead in the shootout, but Brandon Wrinkle, who scored the Bearcats’ goal in regulation, beat the Heights ‘keeper to tie the extra session, 1-1. But Heights came through with another goal before Aledo’s Simon Shulz was turned away by the Heights goalie.

Heights scored again to increase its shootout lead to 3-1, and it was up to Aledo’s Alfredo DeCasas to keep his team in the game. DeCasas scored to cut the Heights lead to 3-2.

However, Heights needed just one score to win the match, and the next Yellow Jackets’ shooter put a shot into the upper reaches of the net to seal the win and the tournament championship.

“I felt our guys played a great tournament,” Bearcats head coach Derek Vierling said of his 5-0-1 squad. “This was a great game, and although we lost in a shootout I am proud of our guys and feel we got better as a team during this tournament.”

The Bearcats opened the scoring when Wrinkle found a loose ball after a throw in and sent a hard shot from 12 yards out past the Heights’ goalkeeper to give Aledo a 1-0 lead with 22:35 remaining in the half.

The Yellow Jackets tied the score 14 minutes later on a point-blank shot of a loose ball. Heights kept the pressure on offensively late in the half, but Garbowski turned back three excellent scoring chances to keep the match tied at the break.