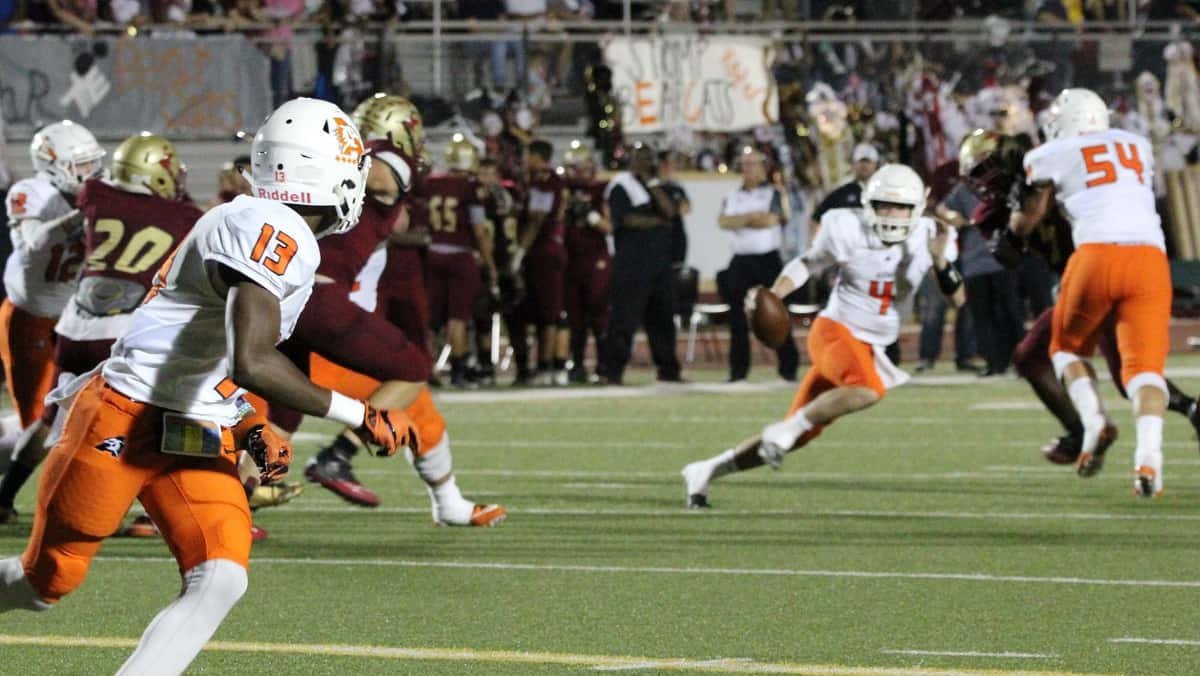 Scoring touchdowns on four of their first five drives, the Aledo Bearcats ran past the Saginaw Rough Riders, 52-7, Friday night in a District 6-5A game at Rough Rider Stadium in Saginaw.

The win raises the Bearcats’ record to 5-0 overall and 2-0 in district play.

The Bearcats’ defense was the shining star again, holding Saginaw to 115 total yards, with most of the yardage coming in the fourth quarter.

“We kind of hang our hats on defense around here,” Bearcats head coach Steve Wood said. “We had a lot of big plays on offense, but when they stack eight in the box we have to throw. I thought (quarterback) Jake (Bishop) did a good job of keeping plays alive with his feet, and he threw the ball well.

“Our first defense did not give (Saginaw) much, and again we take pride in our defense.”

Aledo struck early when after moving the chains with a 14-yard scramble, Bishop fired a 78-yard touchdown pass to Jeffrey “Scooby” Carter. On the play, Carter easily beat single coverage down the left sideline.

Cole Daniels added the extra point, and just 1:02 into the contest the Bearcats led 7-0.

The next Aledo score was set up by an interception by senior cornerback Giovanni Torres at the AHS 10.

Bishop got the ‘Cats out of a third-and-14 hole with a 21-yard keeper to move the chains. Three plays later, Bishop found receiver Beau Mask for a 10-yard gain on third and 10 to keep the drive alive. On the next play, junior tailback Tre Owens blasted off right tackle and went 52 yards to the end zone with 3:38 remaining in the opening quarter.

Saginaw achieved its initial first down of the game on the Riders next possession, but it ended when Aledo linebacker Reagan Rice intercepted a tipped pass at the hosts’ 37.

Bishop once again used his feet to move the chains as he scooted eight yards to convert a third and seven, which brought the ball to the SHS 16 on the final play of the first quarter.

After senior tailback Jake Norwood carried for 10 yards, the Bearcats scored two plays later when Bishop fired a bullet to a diving Money Parks, and the receiver cradled the six-yard touchdown pass just over inside the goal line.

The Bearcats’ defense got into the scoring act next. On third and 19 from the SHS 15, Aledo junior defensive end Colt Ellison snared a swing pass by Saginaw quarterback Luke Blakely and sprinted 15 yards to the end zone with 9:36 left in the half.

“I have no idea where he was throwing the ball,” Ellison said. “When I caught it I knew I would score.”

After a quick three and out that forced another Saginaw punt, it took only one play for Aledo to find the end zone. On first and 10 from his own 39, Bishop tossed a lofty pass down the left sideline to senior receiver Hunter Rosson, who beat single coverage by three steps on his way to completing a 61-yard touchdown play.

Daniels added the PAT, and with 7:50 remaining in the second period the Bearcats’ lead grew to 35-0, where it remained at the half.

Once again, the Bearcats’ defense was rock solid. Saginaw gained just 20 total yards in the first half and was limited to three first downs.

Aledo scored on its opening possession of the second half. A 40-yard Bishop-to-Rosson pass completion put the ball in Saginaw territory, and three plays later, Bishop found receiver Jay Miller for a 26-yard touchdown. On the play, Miller bobbled the pass, but quickly gathered it in waltzed to the end zone.

With 8:25 left in the third period, Will Turner booted the PAT to increase the lead to 42-0.

An interception by Jake Ford on Saginaw’s next possession set up another Aledo score.

On the first play of the drive, Bishop flipped a shovel pass in the middle to Norwood, who was initially bottled up. However, Norwood spun out of trouble to break a tackle and outran two defenders to the end zone to complete a 29-yard touchdown play.

Jack Phillips booted the PAT as Aledo led 49-0 with 6:46 left in the third quarter.

On Saginaw’s ensuing possession another interception – this time by Wyatt Harris – led to an Aledo score. He picked of the ball at the Saginaw 25 and advanced the ball to the hosts’ 13.

But the drive stalled, and Will Turner kicked a 27-yard field goal to extend the lead to 52-0 with 1:52 left in the third period.

Saginaw committed its sixth turnover of the game on its next possession when AHS senior defensive end Bobby Hufnagle recovered a fumble at the end of the third quarter.

Saginaw closed the scoring with the lone score of the fourth quarter when running back Michael Jones scored on a 39-yard run, with Felix Cano adding the extra point.